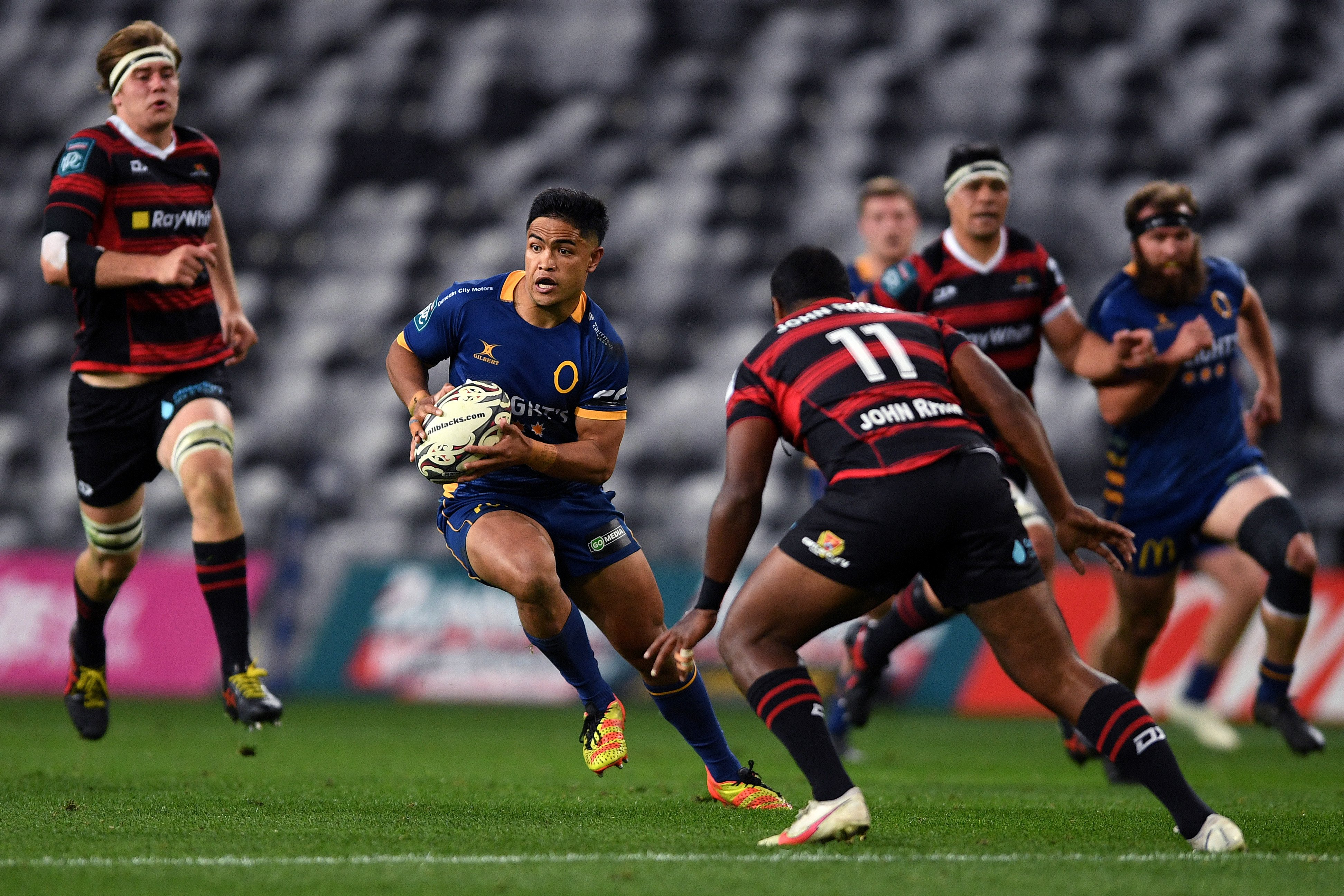 Otago first five-eighth Josh Ioane looks to sidestep Canterbury winger Manasa Mataele during the round eight NPC match at Forsyth Barr Stadium in Dunedin last night. PHOTO: GETTY IMAGES
It was not the prettiest of victories, but any win over Canterbury is a good win as far Otago is concerned.

Otago had all the ball and territory in a dominant second half at Forsyth Barr Stadium in Dunedin last night, and while it was unable to turn that into a try, Josh Ioane's boot proved decisive.

He kicked four penalties in that second half - including one from the sideline with three minutes left - to give Otago a 22-20 win.

It was a remarkable comeback as Otago overturned a 17-0 deficit.

The host did not score until late in the first half and did not take the lead until the 70th minute.

But it dominated large parts of the game and could have won comfortably had it been clinical.

Two opportunistic tries gave Canterbury the upper hand early and that ability to take its chances kept it in the game.

‘‘We showed some real character in the team,'' Otago coach Tom Donnelly said.

‘‘We knew at halftime momentum had just swung a wee bit, although we had a lot of it in the first half. We came out of halftime, knew we had to start well.

‘‘It's a really pleasing result. It showed a lot of character from the team to come back from 17-0 down to get a result.''

He was pleased by his team’s ability to dominate the key areas of the game. However, being more clinical would become a focus for it.

‘‘That's something we're gong to have to work on,'' Donnelly said.

‘‘Going further in this competition, if we've got that much possession and territory we've got to turn it into points. That's how you win games. You don't want to leave it until the last minute to get over the line.''

Otago made the majority of the play early, but it was Canterbury that scored first.

A kick from Sam Gilbert deflected off a Canterbury boot, leaving Ioane to scamper back to hold off flying Canterbury winger Manasa Mataele.

He forced the ball for a 5m scrum, but replacement No 8 Sam Dickson picked of the back and put Canterbury ahead after 20 minutes.

Fergus Burke converted and then added a penalty shortly after to give Canterbury a 10-0 lead.

An intercept pass followed minutes later, initiating the sequence culminating in Burke touching down under the posts.

Freedom Vahaakolo began the Otago comeback late in the half, finishing on an inside ball from Ioane after a Sam Fischli lineout steal in the Canterbury 22.

A 50-22 from Gilbert in the next passage led to a penalty, which Ioane slotted to make it 17-10 at halftime.

Otago dominated from there and Ioane banged over three penalties to make it 17-19 with 10 minutes left.

Canterbury yielded points from its one attacking passage in the half when Alex Harford put it back ahead through a penalty.

But Ioane had the final say, knocking over his sideline kick with three minutes to play.