All Blacks take down South Africa 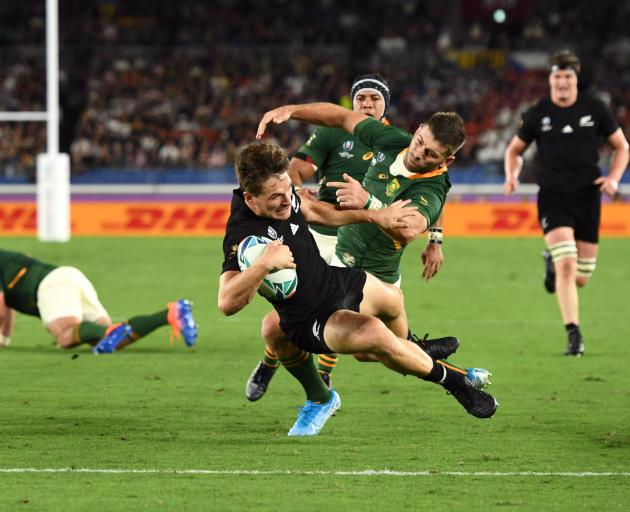 The All Blacks have begun their World Cup defence with a victory over the old foe in a remarkable match at Yokohama which had the feel of a knockout fixture rather than a first pool game.

It had a bit of everything; a dropped goal, intensity and brutally hard hits that could almost be felt by the mainly All Black-supporting crowd.

It also featured the long-rumoured All Black attacking variation and an almost carefree style from Steve Hansen's men that had the Boks in big trouble at halftime before a superb comeback from the South Africans which would have stretched a few nerves from Tokyo to Taihape.

On a cooler evening, the All Blacks brought the heat in the second quarter after finding themselves on the back foot from the start but they had to seriously scramble in the second 40 minutes as the Boks returned with a renewed intensity.

Handre Pollard's dropped goal after 59 minutes, which he hit and turned his back on immediately, narrowed the gap to 17-14 and it was game on again after the All Blacks threatened to run riot with first-half tries to George Bridge and Scott Barrett and a kicking strategy that nearly tied the Boks in knots.

The ability of Richie Mo'unga to find Bridge or fellow wing Sevu Reece with his boot – either high or across the field – had the Boks double guessing themselves after their early period of dominance, but they returned the favour later and, but for a couple of crucial Ardie Savea turnovers, could have done far more damage.

The Boks began with all the possession and territory and stuck to a simple, direct game plan which left the All Blacks looking a little flustered, and, more strangely, apparently under-powered.

But once the intensity switch came from the defending champions the South Africans looked like passengers standing on a platform as one of Japan's famous shinkansen, or bullet trains, rushes past. Instead it was they who looked short of ideas, and frankly, rattled and breathless, with coach Rassie Erasmus increasingly agitated in the coaches' box.

A Pollard penalty attempt miss from close range which hit an upright was the merest hint that things might be turning in the All Blacks' favour and then Reece's acrobatics and Beauden Barrett's coolness at the back was another sign that Hansen's men were at last feeling a little more comfortable.

A more obvious indicator came when Mo'unga pounced and kicked a loose ball through, only to be dragged down about five metres from the line by left wing Makazole Mapimpi, who was penalised for not releasing.

He was probably lucky to escape a yellow card such was the pressure the All Blacks exerted, and a knocked-down pass wasn't even looked at by the officials, but the All Blacks, now level on the scoreboard, struck again when Mo'unga's funky little cross-kick found Reece, the right wing using his feet superbly to break free and send Savea charging away, with Bridge the beneficiary after a brilliant Beauden Barrett break.

Brother Scott was over next; Pollard dropping a high kick and Anton Lienert-Brown breaking through to find the lock looming in support. From staring down the barrel, the All Blacks were suddenly 17-3 up.

Pieter-Steph du Toit's try, from a nifty pick and go, suddenly changed the complexion of the game again and the All Blacks had to dig as hard as they have all year to maintain their lead.

But, eventually, it was a case of mission very much accomplished. The All Blacks are on top of their pool, if not the world, and should stay that way barring a disaster against Canada, Namibia or Italy.