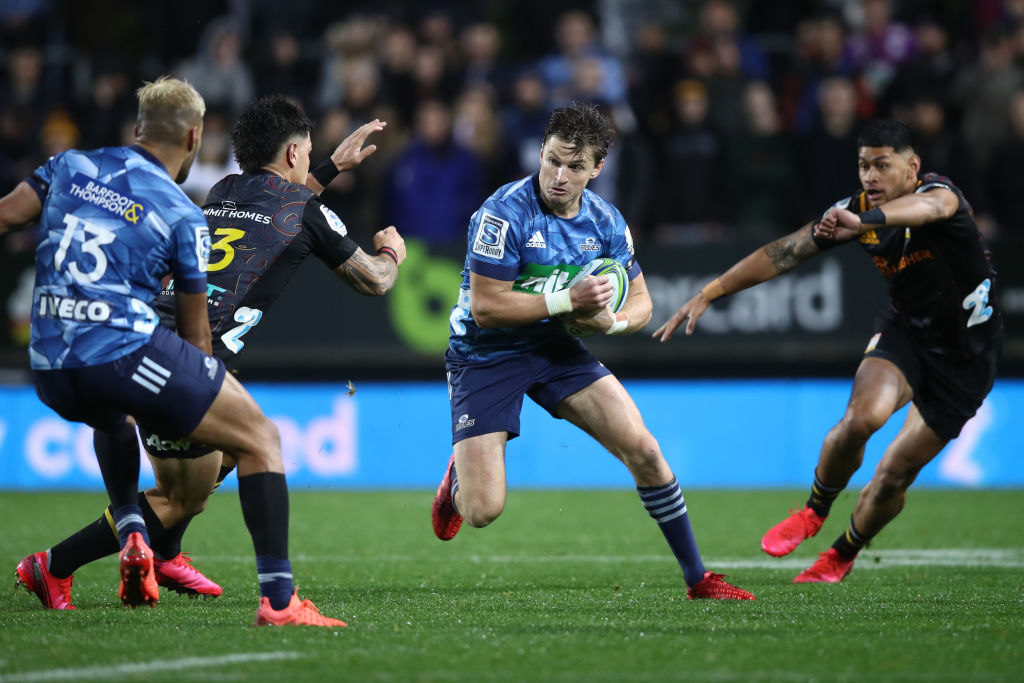 Beauden Barrett runs the ball up for the Blues against the Chiefs. Photo: Getty
A cyber-attack on Lion Breweries left the 23,000 who braved the Hamilton elements without Waikato Draught, and to make matters worse for locals they had to endure a grind of a match in which the Chiefs lost their third home game in succession for the first time since 2002.

Wet conditions and the continued crackdown on the breakdown conspired to deliver an uninspiring spectacle where boot, penalties and spilt ball largely dominated proceedings.

The Blues, however, will return to Auckland in a buoyant mood after securing their first win  - 24-12 - over the Chiefs in Hamilton since 2011.

To add more context to the significance of this win for the Blues – they have now won two of their past 18 games against the Chiefs. It's another notch on the belt for a team intent on proving they are, indeed, a different beast to the many frustrating outfits that have gone before them in recent times.

The Blues fully deserved this victory after scoring the game's only two tries and surviving a yellow card to Dalton Papalii. The win also secured a franchise record fifth away win this season.

Last weekend's opening Super Rugby Aotearoa fixtures dished up 58 penalties and while this match saw a reduction, with 21 handed out, it's clear there is still a long way to go before the teething period is weeded out.

Attacking highlights were in short supply and it was instead a 65th minute Beauden Barrett dropped goal – while under penalty advantage – that gave the Blues the confidence to close this match out.

Watching Barrett's strike sail through the posts sparked the Blues into life late in the second half. From there, the All Blacks playmaker nailed a penalty after shifting from fullback to first five-eighth and the Blues then played with much more freedom as they opened space for Mark Telea to put the result beyond doubt in the right-hand corner.

Patrick Tuipulotu led the Blues brilliantly once more with dominant hits and offloads and Hoskins Sotutu impressed again from No 8. Caleb Clarke looked dangerous with every touch, but the most pleased man in Waikato Stadium will be Leon MacDonald after his side again showed the desired composure to complete their sixth win in a row.

As it was last week in their victory over the Hurricanes at Eden Park, the Blues defence in the second half was superb.

Warren Gatland, on the other hand, has plenty to ponder after the Chiefs dropped their second straight match in this competition.

One week after being upset by the Highlanders in Dunedin, the Chiefs were not much better here as they squandered several chances and endured continued set piece issues. Their lineout in particular is a major problem. A team stacked with attacking firepower failing to score a try will also cause Gatland concerns, as will a late head knock to All Blacks halfback Brad Weber who is now likely to be sidelined next week.

It may be relatively early days in this New Zealand only competition but with the Crusaders in Christchurch next on the agenda, it's already a long way back for the Chiefs.

The Blues had the better of a grim first half but the visitors found themselves on the wrong side of referee Ben O'Keeffe and the breakdown rulings which allowed the Chiefs to chip away through Damian McKenzie's boot.

At one stage in the first half the Blues conceded four straight penalties as they struggled to get on the same page as O'Keeffe.

By halftime, the Blues had conceded 10 penalties to the Chiefs' three. This culminated in Papalii being sent to the sin bin just before the break, despite seemingly snaffling a legitimate turnover.

MacDonald was not happy with the decision as he sounded off in the coaching box, but after chatting to his team at halftime, the Blues assumed control of this match to remain unbeaten in Super Rugby Aotearoa.

Watching the Chiefs lose to their third straight home match - after defeats to the Hurricanes and Brumbies before lockdown - was difficult enough for locals, but having to do it with only Speights in hand further soured the night.