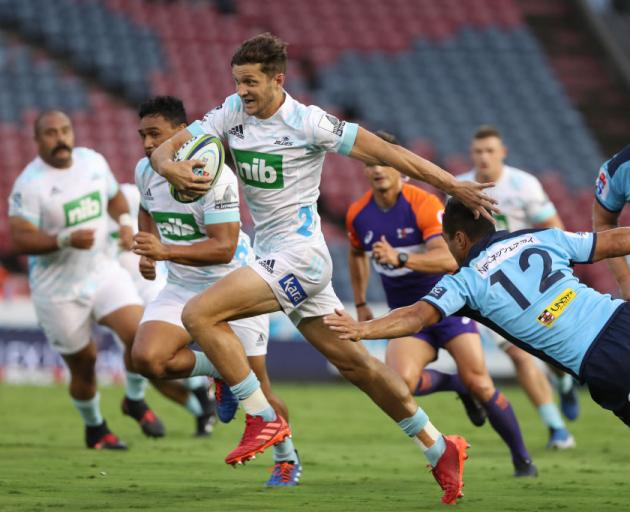 Matt Duffie of the Blues makes a break during their match against the Waratahs. Photo: Getty Images

It's rare enough that the Blues win away from home, but to do so with a performance that was built on patience, composure and discipline is almost unheard of.

But that was what they managed to do in Newcastle in front of a crowd so small they could probably have all squeezed into the coaching box.

The Blues, so ragged and uncertain in the final quarter in their opening game, were cohesive and sure about what they wanted to do this week.

Under pressure to hold a healthy lead again, they managed to do it. It wasn't emphatic or particularly comfortable, but they got the job done and a win on the road will leave them feeling pretty happy with life not just for its rarity value, but because they need all the points they can get.

After a stilted first half where there was a lot of nervous and error-ridden rugby from both teams, the Blues took control in the second half when they had a stiff breeze behind their back.

They started the second period with two decisive tries that were both built on their ability to remain patient and wait for the right opportunity to strike at the heart of the Waratahs' defence.

The first came when TJ Faiane delayed his pass for midfield partner Joe Marchant who hit the line at top speed and at a great angle.

The second by Mark Telea, a few minutes later, was created by an incredible grubber kick from Hoskins Sotutu.

The No 8 is shaping as the most interesting forward in the Blues pack and even the yellow card he picked up after 60 minutes didn't necessarily blight his performance.

That second try gave the Blues a 20-7 lead and a sense of nervousness that they would once again find a way to do something dumb or reckless to kill their chance of victory.

But they kept their heads well enough. There was some pointless, inaccurate kicking, but so too was there some good, clever, accurate kicking, while their tenacity at the breakdown and workrate on defence enabled them to shut the Waratahs down easily enough and win back ample turnovers.

Their resilience saw them finally make the safe game on 77 minutes when Telea was set free on the left after some brutal tackling led to a spilled ball.

And it was a deserved victory for the Blues, who played more of the rugby and who always looked more confident than the Waratahs. They also had the better of the set-piece and probably shaded the breakdown battle, although the shame of it was the Blues weren't able to use their scrum as a weapon, a means to win penalties and crush the spirit of the Waratahs.

Because like most Australian sides, the Waratahs were expert at evading the contest, twisting the engagement, popping up and generally confusing the referee.

It made for a frustrating business where the Blues couldn't extract full value for their obvious dominance and every now and again the referee would even be hoodwinked into giving the Waratahs a penalty.

But that was the nature of things. It was a game of survival and finding a way to build momentum anyway it could come.

Neither side had the confidence or ability to build the phases and string together the sort of clever movements required to generate flow and genuine opportunities.

It was crash and bash rugby, a frantic, non-stop furious battle to find a way to go forward and eke out points.

But the Blues will be happy to win ugly.