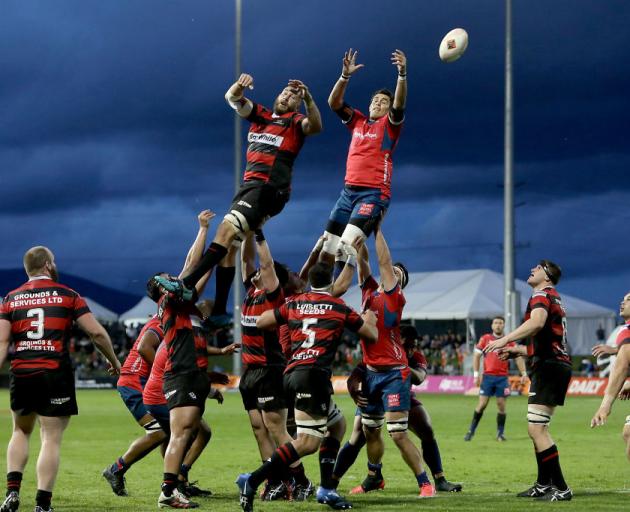 Canterbury and Tasman participate in a lineout during their match in Blenheim last night. Photo: Getty Images
Canterbury have gone the right way about staving off relegation from the Mitre 10 Cup Premiership.

The perennial title contenders have found themselves in unfamiliar territory in 2020, sitting at the foot of the ladder heading into the penultimate round of the regular season.
With top two sides Tasman and Auckland on the schedule for the run home, they seemed set to finish a forgettable season in fitting fashion.

Instead, in surprising Tasman 29-0 in Blenheim on Saturday, Canterbury have not only given themselves a chance of staying in the top division, but are not out of the running for the playoff spots.

"Our start set us off really well," Canterbury captain Reed Prinsep said after the win.

"We talked about intent and just going moment by moment, and the way we started, it just flowed right throughout the game. We just took it block by block, moment by moment and it flowed like that."

Canterbury made their presence felt early, applying pressure on the Tasman defence before winger Ngane Punivai crossed for the first points inside the opening five minutes.

Trailing early, things went from bad to worse for Tasman when they lost midfielder Alex Nankivell to a broken hand just 11 minutes in.

Both sides had their opportunities in the first half, but outside of the opening try the attacking play was patchy on both sides, with handling errors and tough defensive play slowing things down.

Just seven points down and halftime approaching, Tasman were still well in the contest, but a Brett Cameron penalty followed by a dazzling solo try by Josh McKay saw the margin extended to 17 when the halftime whistle sounded.

The hurt only worsened for Tasman when Chay Fihaki intercepted a pass and scooted away to extend the Canterbury lead just six minutes after the restart.

A late try to Isaiah Punivai sealed the deal, with Canterbury handing Tasman their first shutout defeat since a 39-0 loss — also to Canterbury — in 2017.

With a bonus point win, Canterbury move within a point of fourth-placed North Harbour — who trampled Counties Manukau 32-5 in Albany.

After dropping their first three games of the season, North Harbour have now picked up five wins from their last six outings to edge toward a playoff berth.

After a relatively slow start both ways saw North Harbour take a 10-0 lead into the break, they found their way in the second 40 to run up the score and take a comfortable victory.

Earlier in the day, Auckland did it tough against Northland in a 24-20 win — spending most of the game with 14 players.

Auckland lost hookers Soane Vikena and Leni Apisai within the opening 25 minutes, bringing uncontested scrums into play. Because Auckland were the side that caused the issue, they were forced to play the rest of the match a man down, while reserve prop Jarred Adams was tasked with throwing in the lineouts.

Trailing 8-0 at the break, Auckland charged home on the back of a double from Salesi Rayasi, surviving a late Northland charge to retain their spot at the top of the ladder.