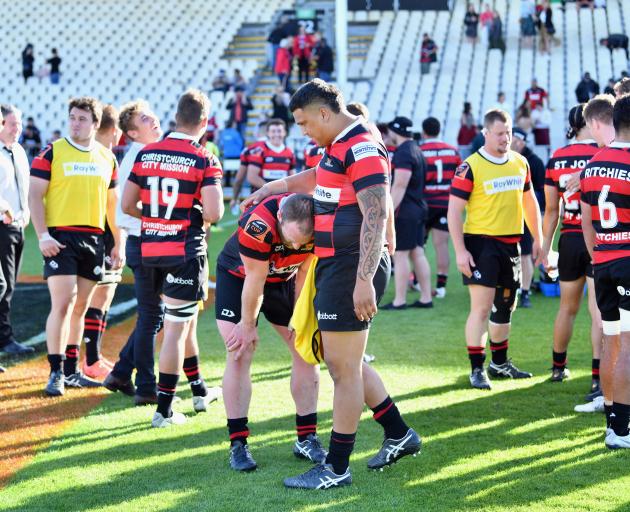 A relieved Canterbury side following their one-point win over Auckland in Christchurch today. Photo: Getty Images
For just the third time in the last 13 years, Canterbury will not feature in the final of the National Provincial Competition.

However, they have done enough to stave off relegation, beating Auckland 34-33 in Christchurch.

Coming into the game in the unfamiliar position of being at the bottom of the ladder, Canterbury were put under pressure early as Auckland ran in two quick tries to go ahead 12-0 within the opening 10 minutes.

Canterbury struggled to mount much of an attack during the opening 40, even after Auckland were reduced to 14 men by the sin-binning of Presley Tufuga.

Trailing 19-5 at the break, there was plenty of work for the hosts to do if they wanted to remain in the Premiership division, and they opened the second half in the best possible way.

Scoring two tries within 10 minutes of the restart, Canterbury had brought the match back to a level standing, before striking their first lead when Luke Romano fell over the line from close range.

When prop Oli Jager followed suit with 14 minutes left to play, the result looked fairly set as Canterbury had established a 31-19 lead.

But Auckland weren't done yet, with tries to Tufuga and Salesi Rayasi in quick succession putting them back in the lead by a point inside the final 10 minutes.

In the end, it came down to the boot of young Canterbury winger Chay Fihaki, who slotted a long-range penalty goal to see his side go back into the lead and, from there, they were able to close it out.

The result sees North Harbour finish at the bottom of the Premiership after they were beaten in a tight contest by Bay of Plenty.

Both teams were in the position of both being able to qualify for the playoffs and be relegated at the end of the day's play, and while Harbour fought to an early lead, Bay of Plenty came home to stronger of the two sides to confirm their spot in the playoffs alongside Auckland, Tasman and Waikato.

While North Harbour finish the year at the foot of the Premiership, it may not matter in the long run with big changes being mooted for the competition.

New Zealand Rugby are reportedly looking into a revamped competition which would see teams divided into North and South pools, as opposed to Premiership and Championship divisions.

In the Championship, Taranaki surrendered a substantial lead against Hawke's Bay, going down 34-33 in Inglewood. Both teams had already secured their spots in the Championship playoffs, but the result means they will meet each other next weekend in the semifinals, with Hawke's Bay topping the table and Taranaki finishing in fourth.