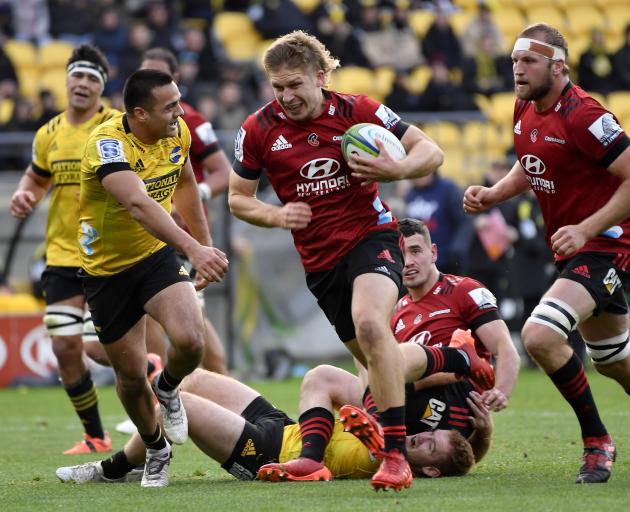 Jack Goodhue on his way to the try line in the Crusaders' win over the Hurricanes in Wellington today. Photo: Getty Images
Out of the blocks this was not a vintage performance from the Crusaders but there is enough from their typically clinical victory over the Hurricanes in Wellington to suggest the defending Super Rugby champions will be just as difficult to counter in the New Zealand-only competition.

The five-tries-to-one ledger leads you to believe the Crusaders cantered to their first victory of the Super Rugby Aotearoa campaign when, in fact, they were pushed hard by a spirited Hurricanes unit before pulling away in the final 10 minutes as champion teams so often do.

Replacement Hurricanes wing Kobus Van Wyk, attempting to pop a pass back into the field of play as he was bundled into touch, gifted Richie Mo'unga a 69th minute try that broke a 25-25 deadlock. It was that play that essentially sealed the Hurricanes' fate, handing them a second straight defeat after losing their opener to the Blues last week.

From there, David Havili put the result beyond doubt with a brilliant hole running line to finish the job.

The Hurricanes claimed their only try 65 minutes in through Asafo Aumua after a superb cut-out pass from TJ Perenara allowed Ngani Laumape to show his strength and put his replacement hooker in.

While the Hurricanes threatened on other occasions, they were always playing catch up and again could not rely on their lineout. They instead leaned heavily on Jackson Garden-Bachop, who slotted 17 points.

The flow of this match, compared to the Blues' victory over the Chiefs in Hamilton, was better but another 26 penalties is still too many with those frequent stoppages proving disruptive.

Emerging from their first-round bye there were no signs of rust as the Crusaders crossed through Sevu Reece within the opening minute. The All Blacks wing and his jinking feet were highly involved from start to finish as the Crusaders varied their attack through smart tactical kicking options to expose space on the edge and in behind the Hurricanes defence.

Mo'unga employed the crossfield kick well and Bryn Hall laid on Braydon Ennor's second strike with a perfectly-weighted grubber in behind.

When Jack Goodhue crossed for the Crusaders third try after a bad high ball spill from fullback Chase Tiatia it seemed as though the visitors were on a different level. They then, however, fell on the wrong side of the breakdown rulings and this allowed the Hurricanes to steal momentum and chip away at the lead through Garden-Bachop's boot.

With their wobbly lineout continuing to be unreliable the Hurricanes opted to take the points at every opportunity rather than kick to the corner and apply more pressure.

By half time the Crusaders were fortunate not to receive a yellow card from referee Brendon Pickerill for repeated infringing after conceding 10 first-half penalties.

The Crusaders were forced to start the second half by reshuffling their midfield after a hamstring injury claimed Ennor. That change brought Havili off the bench and the Crusaders were soon another midfielder short when Goodhue was yellow carded for repeat team penalties.

The Hurricanes failed to capitalise on Goodhue's absence, only collecting three points, and while they drew level midway through the second half there was never a real sense they would run over the defending champions.

With the bye next week, desperation will linger for the Hurricanes, who now share an 0-2 record with the Chiefs.

Scott Robertson's Crusaders, who welcome the Chiefs to Christchurch next, should only get better from here.

The mantle remains theirs to lose.