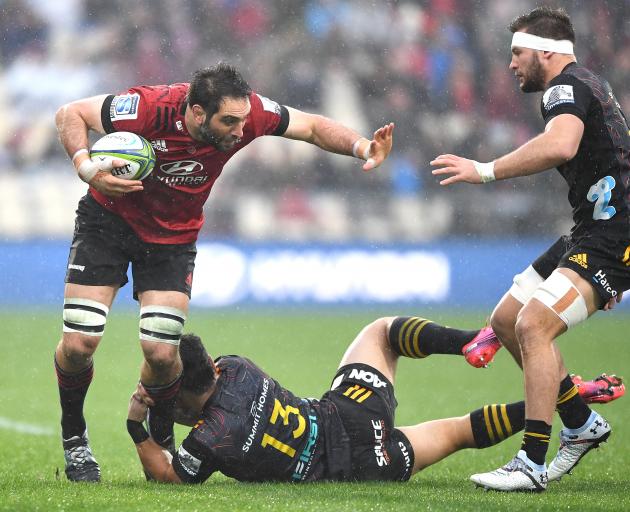 Sam Whitelock looks to fend during a wet afternoon in Christchurch. Photo: Getty Images
Travelling to Christchurch to face the Crusaders is one of the toughest assignments any rugby side can confront. Scott Robertson's men last lost there in 2016, and on a wet Sunday afternoon the Chiefs gave it a decent dig but like so many before they, too, fell short of ending that run.

The character of the Chiefs is not in question. Down 15 points in the second half as the rain drove down it would have been easy to drop heads and start thinking about heading home. Instead they dug deep and gave themselves a chance of stealing this match, battering away at the red wall in the closing stages only to be repelled as they had been for most of the match.

Before extolling the typically clinical Crusaders it's worth pausing to ask what has happened to Warren Gatland's Chiefs? Even Sam Cane's return could not stop a third straight defeat that sees them slip into a major Super Rugby Aotearoa hole.

Lockdown was not good for the Chiefs. While others such as the Highlanders have returned a vastly improved unit, the Chiefs have instead regressed into a team seemingly bereft of confidence.

Injuries to their second-row continues to hurt their set piece but the skill execution across the board will be causing Gatland headaches. So, too, their lack of tries.

Credit must be given to the Crusaders, of course. Even in challenging conditions such as these they have an inherent ability to make even the best look average at times.

Whether it was holding ball carriers off their feet or forcing handling errors in contact, the superb Crusaders defence set the tone for their second victory in this competition after putting away the Hurricanes in Wellington last week.

The final passages said everything about how difficult it is to break down this Crusaders team as they collectively held firm while the Chiefs launched a desperate, and ultimately futile, late onslaught.

Abrasive blindside Cullen Grace was often at the heart of the defensive efforts and dominant hits in contact by leading the line speed, while on attack Will Jordan delivered another sparkling effort.

Jordan produced the most telling moment of the first half when he snaffled Richie Mo'unga's high hoist out of Damian McKenzie's grasp and sprinted away to score the opening try.

Just after halftime Sevu Reece set up Jordan with a quick lineout throw that sent Jordan flying down the touchline and bumping Brad Weber off to score. In the end, those two moments of magic proved the difference.

It speaks volumes of Jordan's captivating form, which has seen the fullback claim 12 tries in 14 outings, that he is keeping the equally-influential David Havili on the bench.

Aaron Cruden did his best to spark the Chiefs with darting half breaks but his attempted offloads didn't go to hand as the Crusaders defence scrambled all game long. This was a frustrating theme for the Chiefs – turnovers at key moments and the failure to convert attacking momentum proving costly.

The intent was there from the Chiefs as they turned down shots at goal and kicked to the corner but time after time the staunch Crusaders were up to the task.

Cane's trademark hits were to the fore and he singlehandedly snuffed out one Crusaders rolling maul five metres out from the line just before half time, but his efforts and a second half try from Sean Wainui were not enough to get the Chiefs off the mark.