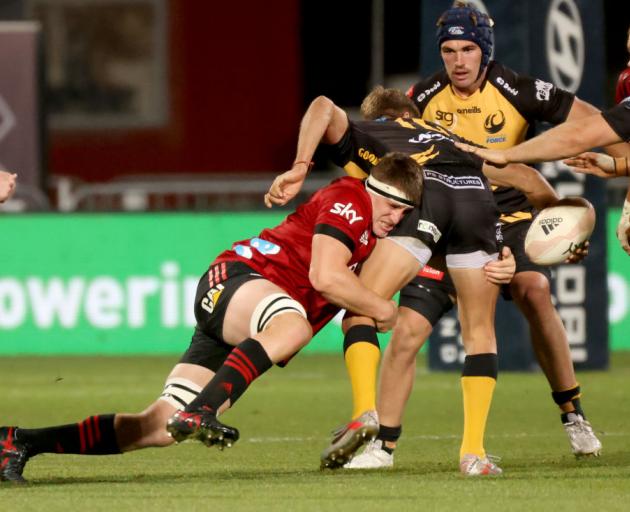 The Crusaders' place in the Super Rugby Transtasman final is now very much in doubt after the Force scored a dramatic late try to deny the red and blacks a bonus point in Christchurch last night.

Scott Robertson's men were in control for the entirety of the match but, after holding the bonus point since the 47th minute when fullback Will Jordan scored his second try, they were far too loose in the final minute when on the hunt for more, and a Jordan attack was turned on its head when substitute wing Jordan Olowofela scored a converted try in the final 20 seconds.

It was a bizarre finish to a match played in the most unusual atmosphere; the Crusaders needing to win with a precious bonus point and preferably a high points differential to stay in the hunt for a place in the final and keep in touch with the front-running Blues and Hurricanes, while the Force wanted only to win or at least put in a respectable performance.

It was almost as if the two teams were playing by different rules and it all added up to a very untidy final quarter, one in which both teams made far more mistakes than they would have liked and the Force in fact enjoying by far the greater possession and territory advantages.

That they couldn't capitalise for a victory wasn't a great surprise given the now 15-1 winning advantage by Kiwi teams over the Aussies in this competition – despite the absence of Sam Whitelock, Richie Mo'unga, Quentin Strange, Oli Jager and Sevu Reece from the home side – but the men from Perth were far better than last weekend when they limply surrendered to the Hurricanes 43-6 in Napier.

Here they were at least competitive and edged the second half in terms of their attack and ability to keep the Crusaders under pressure.

For the Crusaders it was always a risk to rest man of the moment Mo'unga, but his replacement Fergus Burke put in a solid effort and, given the dominance of the Crusaders pack – with 21-year-old giant prop Tamaiti Williams putting in an excellent performance in his starting debut – the home side didn't lack for attacking weapons.

Jordan, who had a mixed night on defence, scored a double and should have had a hat-trick two minutes after scoring his second try in the second half but for a mistake by Force fullback Jake Strachan, who put a foot on touch when throwing a doomed pass to first-five Domingo Miotti. In the end it was crucial and the tiny margin may cost the Crusaders a place in the final.

The Force were initially tough to break down and scored the first try after only three minutes when an injection into the backline by former All Black Richard Kahui set Toni Pulu free down the right wing and the former Chiefs player did well to evade both Jordan and Manasa Mataele for the game's first try.

The Crusaders immediately went direct. Mataele went over after an excellent kick through by Jordan and a superb strip by Whetukamokamo Douglas, and a scrum penalty and lineout wing allowed Jordan to go over.

Douglas' try from a driving maul off a lineout put the Crusaders 17-7 up and seemingly in the clear. Force No 8 Ollie Callan put a potential spanner in the Crusaders' works by crashing over from close range only for Sione Havili Talitui to go over for a converted try from a quick tap on the halftime siren.

It gave them a 24-14 lead but the second half belonged to the Force and they will be far happier with the result even despite the defeat.

"It's been a bit of a theme the last couple of games leaking points, and that one really hurts," Crusaders skipper Scott Barrett said afterwards.