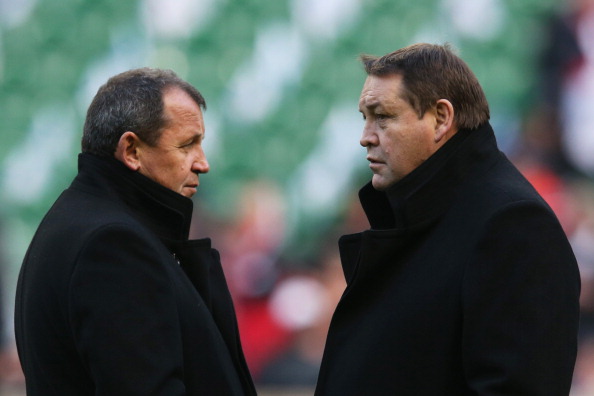 Ian Foster and Steve Hansen. Photo: Getty Images
The All Blacks coach Ian Foster joked he had told his players to steer clear of Steve Hansen in case his former boss tries to convince them to switch codes and join him at the NRL's Canterbury Bulldogs.

Hansen, who stepped down after 16 years with the All Blacks following the 2019 World Cup, was appointed by the Bulldogs on a short-term deal as a "high performance consultant".

He will work with the coaches, management staff and the players' leadership group, the NRL team said.

"I'm excited for him. I'm sure he will do that stuff really, really well," Foster told reporters after naming his side for their Bledisloe Cup/Tri-Nations clash with the Wallabies.

"I have told him that I've banned our backs from taking any calls from him," Foster added with a laugh.

The message, however, did not appear to get through to utility back Jordie Barrett.

"I have been checking my phone," said a grinning Barrett, who is contracted to New Zealand Rugby until 2022. "Hopefully Steve is going to throw me a nice deal over at the Bulldogs."

Hansen will combine the NRL role with his Director of Rugby job at Japanese club Toyota.

All Blacks halfback Aaron Smith, who was first picked by Hansen in 2012 and will earn his 95th cap on Saturday, had no doubt Hansen would succeed in the role, but had one request.

"Hook us up with some tickets, bro," Smith said.