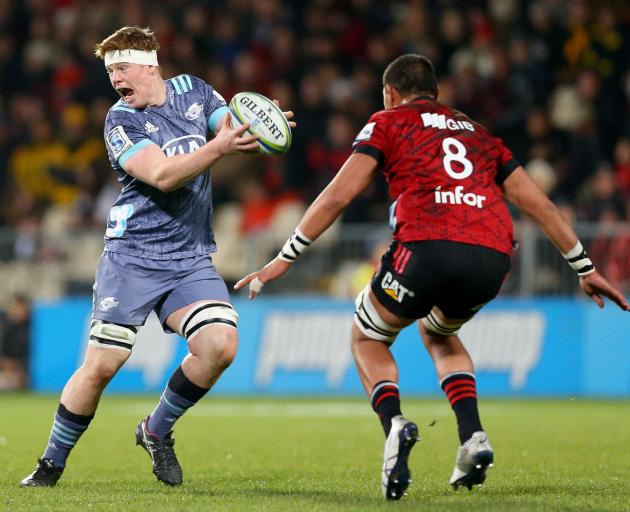 Hurricanes lock James Blackwell looks to sidestep Whetu Douglas of the Crusaders during a thrilling Super Rugby Aotearoa match in Christchurch. Photo: Getty Images
They were the last Super Rugby side to defeat the Crusaders in Christchurch four long years ago. Tonight the Hurricanes repeated the dose with a supremely patient and disciplined display to stun the defending champions and end their stretch of 36 unbeaten games at home.

TJ Perenara and Ardie Savea were involved in that 2016 victory and they will again savour the night the Hurricanes proved the Crusaders are, indeed, beatable.

The Hurricanes did so with a commitment to the collisions and an undaunted attitude.

Still, a side that has claimed the last three Super Rugby titles does not reach for excuses. They were beaten by a better side on their home patch to throw Super Rugby Aotearoa wide open.

Nothing should detract from the manner in which the Hurricanes stormed Christchurch.

With Beauden Barrett shifting north this season, the Hurricanes have largely flown under the radar. They were supposed to be fighting for best of the rest after losing their first two games of the New Zealand derby season. Since then, though, the unheralded Wellington outfit has found a groove – winning four straight to revive a once flatlining campaign.

This victory will be sweeter than any other this season.

As he does every week, All Blacks playmaker Richie Mo'unga did his best to spark a Crusaders comeback in the second half. The Hurricanes led 21-17 at halftime, and 31-20 midway through the second half, but when Mo'unga has the ball in his hands, anything is possible.

Two pieces of Mo'unga magic almost turned the result. First he produced a solo chip and chase after plucking ball from the air to help set up Quinten Strange's 69th-minute try that reduced the margin to four points. Mo'unga then made a break and put Sevu Reece in at the corner to give himself a chance to tie the match with a sideline conversion.

That strike proved a step too far, though, and the Hurricanes held on for the final two minutes for a memorable upset.

This was a hugely attritional match that featured seven tries and claimed the in-form Ngani Laumape, who injured his forearm attempting to tackle Joe Moody in the 48th minute and then left the field in a dejected mood after attempting to play on.

Peter Umaga-Jensen, one of the standout figures from centre for the Hurricanes, also departed after scoring in the 62th minute and taking a head knock in the process.

The Hurricanes arrived with intent to get in the face and rattle the Crusaders. On defence the visitors brought relentless linespeed aggression and while they didn't always get this right, the Crusaders knew they were in a battle from the outset.

On attack, the Hurricanes used the width well with forwards and backs linking to create space on the edges where Wes Goosen twice finished sweeping movements. Inside Goosen, Umaga-Jensen picked up where he left off last week by showcasing his strength in contact with brilliantly timed angled bursts from centre.

The Crusaders' main area of dominance came from their scrum where they took advantage after the Hurricanes lost prop Tyrel Lomax and locks Isaia Walker-Leawere and Vaea Fifita prior to kickoff. Sixteen minutes into the contest fellow Hurricanes prop Fraser Armstrong then departed with shoulder injury.

Mo'unga scored the Crusaders' first try after a nice tip on pass from Jack Goodhue at first receiver. George Bridge claimed their second following a Reece bust, the All Blacks wing kicking ahead a wide pass and somehow getting to the ball first after the bouncing ball wrong-footed Barrett in-goal.

Other than those two passages, though, the Hurricanes dominated territory and possession and therefore deserved their half time advantage after four lead changes.

The Crusaders started the second spell with a plan to keep the ball in hand. Mo'unga challenged the line much more, attempting to ignite his team, and the Crusaders increased their offloading game.

Opting not to kick the ball away the Crusaders denied the Hurricanes possession for large periods to close within two points.

But unlike so many occasions before, this time it was the visitors who held their composure in Christchurch.