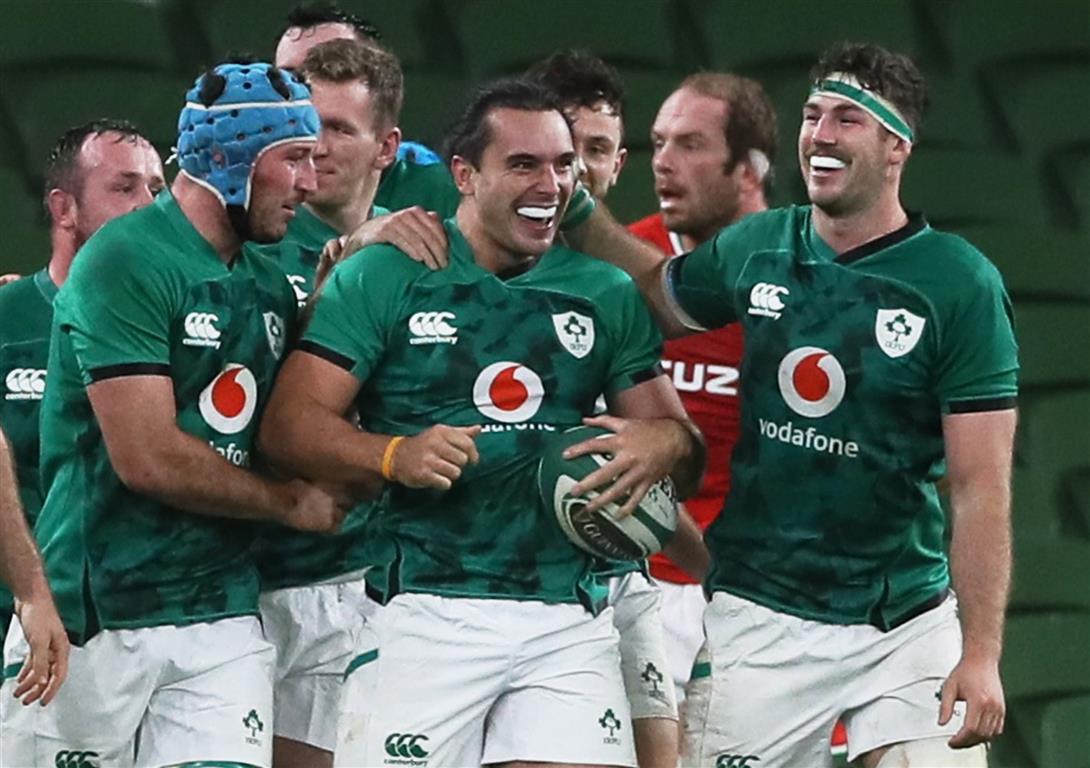 Ireland players celebrate their win over Wales. Photo: Reuters
Ireland added to Wales' miserable 2020 with a convincing 32-9 win in the opening game of the new Autumn Nations Cup that has replaced the usual mix of northern versus southern hemisphere clashes derailed by Covid-19.

A Quinn Roux try helped the hosts to a worthy 16-6 halftime lead and last year's Six Nations grand slam winners and World Cup semi-finalists were well on the way to a sixth loss in a row when James Lowe added a deserved debut try.

Andy Farrell's improved Ireland may have to visit England for what could be a Pool A decider next week without captain Johnny Sexton after the influential flyhalf left the game with less than half an hour on the clock due to a hamstring strain.

"It doesn't seem too serious, we'll see what the scan says tomorrow. Frustrating but most importantly we're very pleased to bounce back. We did some things much better tonight," Sexton said in a pitchside interview, referring to a disappointing end to the delayed Six Nations in Paris two weeks ago.

Ireland's scrum exerted its dominance early on with Andrew Porter giving a crumpling Rhys Carre a torrid time to provide the platform for Roux to grab the opening try after 23 minutes. Carre was replaced before halftime.

Two penalties and a conversion from Sexton put the hosts 10 points ahead before his exit handed former England Under-20 international Billy Burns a first cap.

It was one of the other debutants, New Zealand-born wing Lowe, who brought the extra dimension Farrell was looking for in attack while fellow Kiwi Jamison Gibson-Park also added an extra spark at scrumhalf in an impressive Irish first half.

Loaded with experience, Wales dug into their 1,000-plus caps to battle their way back into the game but, with the usually trusty goalkicking of Leigh Halfpenny misfiring, the visitors could only briefly cut the deficit to seven points.

Two more penalties from Conor Murray, on as a makeshift flyhalf after Burns left for a head injury assessment, put the game out of sight before Lowe struck from close range with the last play of the game.

England host lowly Georgia on Saturday with the four best Pool A sides set for a Dec. 5-6 finale against the corresponding finishing positions of Pool B, where Sunday's France and Fiji game was called off due to a COVID-19 outbreak.