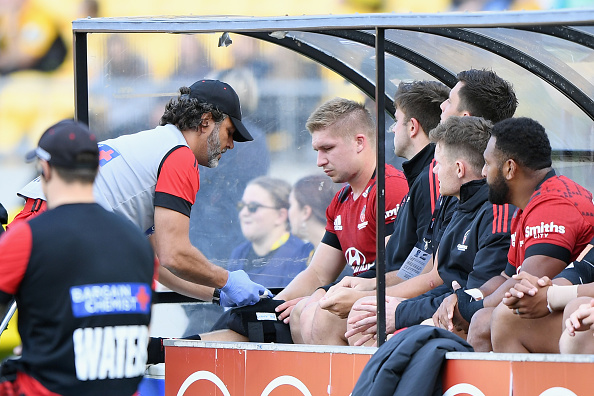 Jack Goodhue receives medical help during the match against the Hurricanes. Photo: Getty Images
The Crusaders could be without the services of All Blacks duo Joe Moody and Jack Goodhue for some time after the pair were injured in their golden-point win over the Hurricanes.

Neither player was able to see out the first half, with Goodhue helped from the field with an injury to his left knee in the 21st minute, while Moody left the game due to plantar fasciitis in his left foot five minutes later.

While there was little information available to him on the injuries after the game, Crusaders coach Scott Robertson was not optimistic about the extent of the damage.

"The scan will define that. I didn't get through Otago University," Robertson said when asked about the extent of the injuries.

"Both will get scans but it looks serious."

Compared to other teams, the Crusaders had been relatively injury-free through the Sky Super Rugby Aotearoa season until this point. They lost loose forward Tom Sanders to a broken cheekbone, but he returned off the bench today, and are expecting utility back Braydon Ennor to return in the coming weeks from an ACL rupture suffered late last year.

"We'd been talking about it yesterday, ironically," Robertson said.

"In one game, in five minutes of a game, things changed pretty quickly. But to win a championship you need to go deep into your squad. Teams are doing it, and that includes us."

For Moody, the injury brought a premature end to his 100th Super Rugby game for the Crusaders, a milestone that he noted earlier in the week had taken him longer to get to than many others due to injuries over the years.

"He's not very emotive chap so he doesn't give too much away, but he's pretty gutted," Robertson said of Moody after the game.

"When you get injured in your 100th it's not easy. You want to stand there with your family and friends and enjoy it without having something hanging over your head like an injury.

"But just on the positive side, a hell of a player, a hell of a man, old school in the way he plays and new school as a professional - full respect to him."