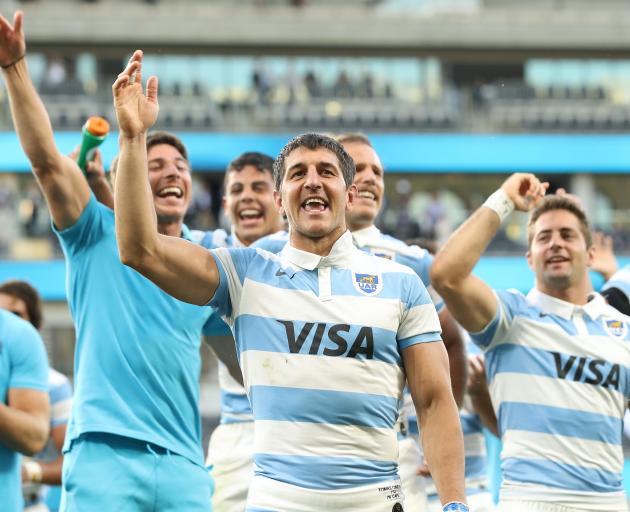 Tomas Cubelli of the Pumas thanks the crowd after their stunning win over the All Blacks. Photo: Getty Images
Argentina have pulled off one of the great test rugby upsets, stunning the All Blacks for the first time.

The Pumas' maiden triumph over the All Blacks, in their 30th attempt, will be celebrated throughout a proud rugby nation but so, too, does it deserve the upmost recognition for the circumstances in which it arrives.

Argentina have been oh so close on so many occasions against the All Blacks but they, finally, have their historic moment.

That they did it in Sydney, after spending two weeks in quarantine and last playing a test 402 days ago, speaks volumes of the achievement. The tears from many of their players, and coach Mario Ledesma, tells you everything about what this means to the Pumas.

Those Argentineans in the 9063-strong crowd were celebrating in style by the finish after watching their men largely dominate the All Blacks from the outset.

The All Blacks, meanwhile, were left in a state of disbelief.

Sam Cane said he was extremely disappointed, and gave "full credit" to Argentina. He blamed "discipline issues" and "silly frustration penalties in the first half".

"The lesson is in test match rugby you've got to turn up with the right intent, the right attitude every single weekend, or you get it handed to you," Cane said.

"They were good tonight and we weren't good enough. Their defence was outstanding."

The All Blacks were supposed to respond from last week's defeat to the Wallabies in Brisbane but despite returning to his first-choice side Ian Foster's tenure was instead punctured by successive losses to further heap pressure on his shaky new era.

The inconsistency that has plagued the All Blacks this season again reared its ugly head.

Ill-discipline, urgency and execution were all lacking for the All Blacks and they blew repeated chances – botching one lineout five metres out and Rieko Ioane dropping the ball with Caleb Clarke unmarked outside him – in the second spell as they attempted to haul in a 16-3 halftime deficit.

Countless times in previous years we have witnessed the All Blacks pull off great escapes but that clinical composure was nowhere to be seen. 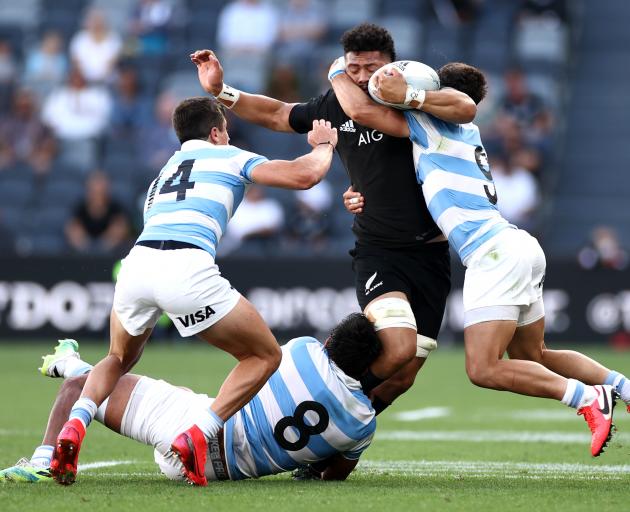 Ardie Savea is enveloped by the Argentine defence. Photo: Getty Images
Perhaps most concerning of all, though, was when passes hit the deck almost every time a player in blue and white dived on it first. Based on body language alone, the Pumas certainly wanted this victory more.

Argentina were dominant at scrum time, they found success with their maul and in Nicolás Sánchez, who calmly collected 25 points, they had the superior playmaker.

All Blacks coach Ian Foster said Argentina, who were underdone, had turned a "disadvantage into an advantage (and played) fresh."

"It was the second week in arrow we haven't had good composure when things didn't go our way," Foster said.

"We're hurting greatly but they should be very proud of their team. It was a historic win for them."

Defensively the Pumas were superb from start to finish – defying predictions they would struggle to hack the pace in their return to the test arena. Their tackle intent and accuracy regularly stopped the predictable All Blacks' ball carriers in their tracks which bred frustration and wayward kicking options.

The breakdown was a similar story, with Argentina bringing far more urgency into this area in numbers and disrupting the All Blacks' ability to build pressure.

Former Wallabies coach Michael Cheika, now in the Pumas coaching box, was likely an influential figure in the breakdown work while captain Pablo Matera proved a frequent source of inspiration, putting on big shots and winning breakdown turnovers. None were more crucial than the one he snaffled in the 74th minute with the All Blacks hot on attack.

The temperamental All Blacks, however, did not help themselves with several moments of madness making a mockery of the need for better discipline after last week's defeat.

Shannon Frizell and Dane Coles were both penalised for needless slaps on opposing players that offered the Pumas easy escapes. In Coles' case it was worse still with the penalty reversed.

Referee Angus Gardner did have one deadset shocker, though, when he pinged Jordie Barrett for an innocuous collision following a kick.

Sánchez's early try was somewhat fortuitous after he regathered his chip kick from a rebound off a teammate's shin but there was nothing lucky about the Pumas' 13 point halftime lead.

That margin would have been more, too, but for Aaron Smith's desperate try-saving tackle on Pumas wing Juan Imhoff following a breakaway.

When Richie Mo'unga kicked dead from a penalty, as the All Blacks attempted to hit back before the break, it was clear they were rattled.

In the second half the All Blacks went to their kicking game – a clear sign of respect for the staunch Pumas defence.

The All Blacks needed 53 minutes to finally crack the Pumas line. That came from a quick lineout throw, and a rolling maul which finished with captain Sam Cane crossing.

Hoskins Sotutu injected impact from the bench and Clarke bagged his first test try but it was all too, little too late, for the All Blacks.

While the Pumas thoroughly deserve their historic victory, serious questions must now be asked about this All Blacks side.