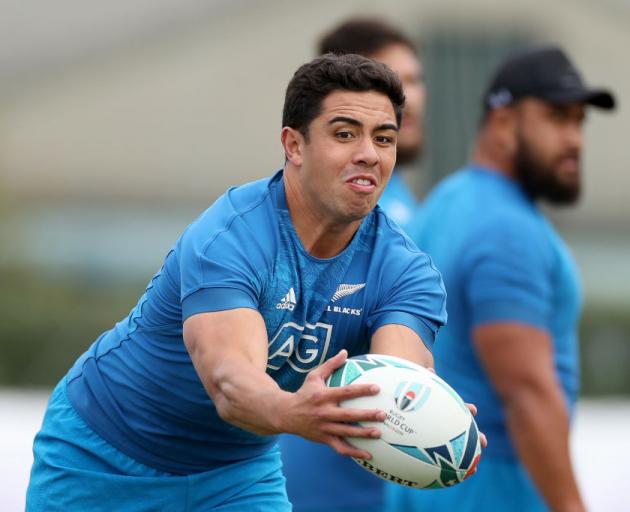 Anton Lienert-Brown concentrates during a training session with the All Blacks in Tokyo in preparation for their Rugby World Cup quarterfinal against Ireland tonight.PHOTO: GETTY IMAGES
Anton Lienert-Brown was near done. He had finished another rugby year and he was so exhausted he did not have the energy to consider another one. Was this it for his career?

Luckily for the now 24-year-old, the Chiefs and the All Blacks, Lienert-Brown, a professional rugby player since 2014, stuck with the game after making a few significant changes to his approach a few years ago.

It was not the tough physical side of the game that was hurting him, it was the inability to switch off mentally. The game had consumed him and he could not get away from it. It sent him into a spiral - "gassed'', he called it.

But after discussions with Chiefs mental skills coach David Galbraith and All Blacks manager Gilbert Enoka, Lienert-Brown learned to put the game's importance into perspective and he and the All Blacks are now reaping the benefits. He will start the World Cup quarterfinal against Ireland at Tokyo Stadium tonight as one of coach Steve Hansen's form backs.

"Things all got a bit much and that stemmed from rugby taking over my life,'' Lienert-Brown said.

"All my thoughts were about rugby. It was who I was. If I had a bad training or bad game that controlled my life. It's not a very pleasant place to be when that happens because some things are uncontrollable and you have to have a balance.

"When I got to the end of a rugby season I'd be gassed. I didn't know if I could do another one. I thought `Am I training too hard? Is it this hard? Is this how I'm going to feel every year?'

"We train hard but it wasn't that. My brain was ticking over at 100 miles an hour all the time and that takes it out of you.

"Where I've got to now is a good balance. I make a conscious effort to step away from rugby and to be present in the moment, whatever moment that is ..

"Growing up helps as well. Now, when I step on to the pitch or training field or into meetings, I can be present but when I'm away from rugby I can have my downtime.

"What that's done to my rugby is massive. It's freed my mind up and reignited my love for rugby and I think my on-field performances have shown that; the freedom to play. I'm really enjoying my rugby again.''

Lienert-Brown's openness about his challenges comes from a growing awareness of the mental side of the game and the differences among the All Blacks in how they approach it.

"A lot of people probably wouldn't have known. I probably put on a pretty good front. What I've learned now is that it's better to express your feelings and let people know, especially your loved ones.

Described as "unorthodox'' by attack coach Ian Foster this year, Lienert-Brown is all funky angles and offloads - a potential nightmare to defend against, a man, along with Richie Mo'unga and Beauden Barrett, who might just hold the key to unlocking the Irish defence.

"I do things differently. Sometimes I make the basic things look hard and the flashy things - the offloading and stuff - can look more natural. I don't know why, it's just how things work for me,'' he said.

"They've beaten us in two of the last three tests but this is a different kettle of fish. We've prepared well and we just have to get out there and do the business.''