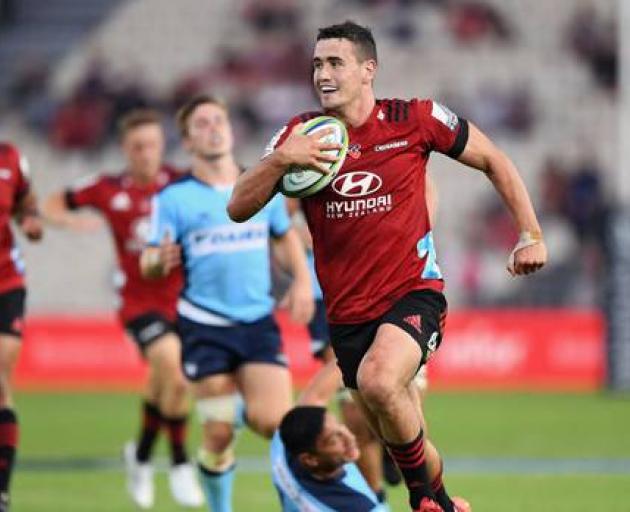 Will Jordan scores for the Crusaders. Photo: Getty Images via NZ Herald
Normal service has resumed in the South, and those who thought losing veterans across the park would slow the Crusaders down early in the new Super Rugby season were quickly proved wrong.

"It was a good way to start the season with a win. The boys turned up and the backs scored some nice tries," Crusaders captain Scott Barrett said.

"We wanted to start well by setting the pace of this competition. We showed plenty of attacking endeavour there but, like the first game of the season, there were plenty of errors from both sides."

The Waratahs had their opportunities dispersed throughout the match, but were only able to cross the stripe through a terrific second-half finish from 19-year-old winger Mark Nawaqanitawase on debut.

He bagged his second just moments later, streaking away after picking off a Whetukamokamo Douglas pass. Fellow winger Alex Newsome added one at the final whistle, but by that time the Crusaders had the win locked away.

For most of the match though, the Waratahs were unable to find the final piece to a play when they threatened the Crusaders line. The only other occasion they looked as though they had done so, which saw fullback Kurtley Beale dot down, was ruled back due to a forward pass.

At times, the Waratahs caused their own problems with the tryline in sight, as they were prone to making the wrong decision in scoring position.

The Crusaders, on the other hand, looked dangerous from the opening whistle when winger Will Jordan almost produced a bit of magic with a chip and chase play down the sideline.

Jordan and fellow winger Leicester Fainga'anuku impressed deputising for All Blacks wingers Sevu Reece and George Bridge in the starting side, both scoring first-half tries and threatening throughout the contest. Both Jordan and centre Braydon Ennor got across the stripe twice in the game, making the most their opportunities in space.

The hosts made the most of their time with the ball and proved to be hard to bring down, breaking the line 10 times and beating defenders across the park, with the Waratahs missing 33 tackles on the night.

The Stormers got their Super Rugby season off to an impressive start with a 27-0 bonus-point victory over the Hurricanes in South Africa on Saturday, but will be sweating over the fitness of Siya Kolisi who was forced off in the first half.

The Springbok World Cup-winning captain was hit by a late tackle from Hurricanes hooker Ricky Riccitelli and injured his knee, limping out of the contest at Newlands in Cape Town.

Kolisi was touch-and-go for the World Cup in Japan last year with a knee problem, and it will be of major concern that he lasted only 26 minutes in the first game of the new season.

"Siya is being scanned right now and it is a big blow, to lose your skipper in the first 20 minutes of the campaign, with what he means to the team on and off the field," Stormers coach John Dobson told reporters.

"We could be faced with a Grade 2 MCL (medial collateral ligament), which is six weeks (to heal), or it could be more serious than that."

The Stormers were already 12-0 up by the time Kolisi departed, wing Sergeal Petersen crossing the line before Bok prop Steven Kitshoff barged his way over for a second.

Another World Cup winner, halfback Herschel Jantjies, added a third before halftime as he scooped up a loose ball to race clear for a dominant home side.

First five-eighth Damian Willemse ran the length of the pitch after an intercept to score a late fourth try.

The Hurricanes made too many unforced errors in what was a forgettable performance from the New Zealand side, who tried to play a physical game that was not matched by skill.

They lost centre Billy Proctor and flank Vaea Fifita to yellow cards, while Riccitelli was also fortunate to escape sanction for his late hit on Kolisi.

The Hurricanes travel to Argentina to face last season’s beaten finalists, the Jaguares, on Saturday.

The Stormers handed a debut to former Wales and British and Irish Lions centre Jamie Roberts. They host the Bulls in their next outing.

Japan's Sunwolves opened their final season with a bang on Saturday, running in five tries for a deserved 36-27 victory over the Melbourne Rebels in Fukuoka.

The departure of the Sunwolves at the end of the 2020 season had already been rubber stamped before the success of last year's World Cup in Japan, which captivated the host nation.

Shorn of the Brave Blossoms players who took Japan to the quarter-finals for the first time at that tournament, a new Sunwolves team of international journeymen and unproven youngsters had been thrown together over the last few weeks.

They still dominated the error-prone visitors, however, and led 27-13 when Australian winger James Dargaville returned an Andrew Kellaway chip kick 50 metres to touch down just after halftime.

The Rebels, with a string of Wallabies in their backline, went for broke to try and get back into the contest but the hastily constructed Sunwolves defensive system did enough for the home side to pull off the victory.

It was only the ninth victory in 62 matches over five years for the Sunwolves and the first in the opening round of the season.

"We assembled four weeks ago and to put in that effort today was unbelievable," said Sunwolves number eight Jake Schatz, another Australian.

"It showed that we wanted to play for each other, it was unbelievable. Everyone just dug in, showed some heart."

The decision to axe the Sunwolves was made in March last year after the Japan Rugby Football Union (JRFU) said they were unable to underwrite tens of millions of dollars in costs previously borne by the southern hemisphere nations.

The ACT Brumbies got their Super Rugby season under way despite a state of emergency in Canberra on Friday and ran out 27-24 winners over the Queensland Reds.

Australian authorities declared the state of emergency earlier in the day as soaring temperatures and strong whipped up huge, unpredictable bushfires to the south of the capital.

Firefighters who have been battling the bushfire emergency for months were honoured on the pitch before a match that many thought might not go ahead because of the smoke that has choked Canberra in recent months.

The worst of the smoke stayed away but the heat - approaching 40degC at kickoff - was intense.

The twice champion Brumbies, semi-finalists last year, scored first when centre Irae Simone crossed in the fifth minute but Brad Thorn's young Reds side soon hit back when Henry Speight came off his wing to score against his former team.

Fullback Bryce Hegarty kicked a penalty to put the visitors ahead and then crossed for a try on the stroke of halftime to give the Reds a 17-7 lead.

A top-notch finish in the corner from Brumbies winger Tom Wright tied up the scores early in the second half before fullback Tom Banks gathered a pop pass and raced 40 metres around Reds flyhalf Isaac Lucas to put the home side ahead.

Rookie Brumbies first five-eighth Noah Lolesio extended the lead with a penalty five minutes from time and a late try from his fellow 20-year-old, Reds number eight Harry Wilson, was only enough for a losing bonus point for the Queenslanders.

There had been concern about the fixture for some time, especially after the Brumbies were forced to move their pre-season camp to Newcastle when bushfire smoke shut down their training camp.

Southern hemisphere rugby bosses SANZAAR issued an air quality policy on Wednesday to help officials assess the effects of bushfire smoke after several other sporting events around the country were disrupted.