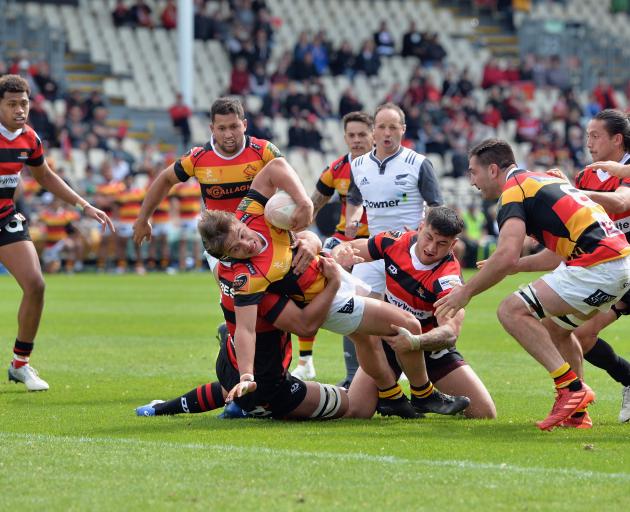 Cortez Ratima of Waikato dives over to score the match-winning try in Christchurch. Photo: Getty Images
As the race for finals spots in the Mitre 10 Cup Premiership heats up, Waikato have snatched a dramatic victory over Canterbury.

The Mooloos entered the contest with form and table position over their Premiership counterparts, and while they were chasing the match for the most part, they took the lead when it mattered most.

Down by six, substitute halfback Cortez Ratima crossed off the back of a scrum. With victory in the palm of his hands, Rivez Reihana slotted the conversion for a 16-15 win.

The two teams had to plough through 90 minutes of action before a winner was declared, mirroring that of the opening Bledisloe Cup test last weekend. Waikato constantly barraged the Canterbury defensive line with waves of attack deep in the hosts' half, constantly being rewarded with penalties as well as gaining a one-man advantage when Canterbury reserve back Isaiah Punivai was yellow carded.

The win propels the Mooloos into second on the table, trailing Auckland by one point with four games left in the regular season.

Reihana's boot was Waikato's best weapon in the early stages with three penalty goals before they broke through for their first and only try.

Tries were hard to come by with the hosts crashing over in the 13th minute, before crossing for what looked to be a decisive try in the context of the match in the 48th minute, leading to a then nine-point advantage.

Waikato's victory means they are in position for a home semifinal. Tasman's loss yesterday to Auckland not only drops the widely perceived favourites to third, but also boosts the chances of other teams taking top spot as the final sprint begins.

For Canterbury, they remain fifth with a bonus point bringing them to within one point of fourth-placed Wellington. Just two points separate third through fifth.