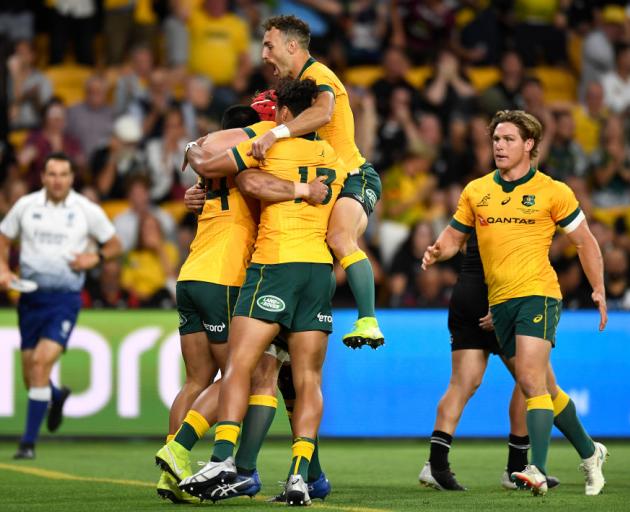 Wallabies players celebrate a Tom Wright try during the 2020 Tri-Nations match against the All Blacks. Photo: Getty Images
Drama, controversy, off the ball cheap shots, two red cards and a stunning Wallabies upset. This match had it all.

Suncorp Stadium has again proved problematic for the All Blacks, with one win from their last five attempts at the Brisbane venue, while the Wallabies are now unbeaten in seven straight tests there.

Seven days after suffering a 38-point defeat, their heaviest against the All Blacks, Dave Rennie's Wallabies pulled off a remarkable reversal to hand Ian Foster the first loss of his tenure thanks to a 76th minute Taniela Tupou try.

Australian referee Nic Berry, who struggled to control the match, dished out four cards – two red and two yellow - but the All Blacks will not look for excuses.

Scott Barrett's yellow card for a cynical ruck infringement with 12 minutes left proved decisive, forcing the All Blacks to courageously contest much of the closing stages with 13 men.

Ardie Savea, alongside captain Sam Cane, delivered an inspirational performance and it was his charge which led to a late Tupou Vaa'i try that gave the All Blacks hope, but in the end that ultimately proved a consolation effort.

Tuning in as a neutral observer you wouldn't know the Bledisloe Cup was locked away by the All Blacks last week.

This wasn't exactly a great endorsement for playing by the rules, but it sure was a passionate, frantic contest that left all involved out on their feet.

Debut Wallabies wing Tom Wright and All Blacks opposite Rieko Ioane exchanged early tries but the fourth Bledisloe of the year then turned on its head when Ofa Tuungafasi became the fifth All Black to be red carded in a test, following Cyril Brownlie (1925), Sir Colin Meads (1967), Sonny Bill Williams (2017) and Scott Barrett (2019).

The Blues prop caught Wright, who was ducking into the tackle, with a shoulder to the head in the 23rd minute, and Berry believed there were no mitigating factors at play so flashed his first red card.

After the selectors' decision to make 10 starting changes, including two positional, the All Blacks suddenly found themselves under immense pressure – in a completely different situation to their record victory in Sydney.

Unfortunately for Akira Ioane when the next scrum was packed his test debut ended after 30 minutes as Hurricanes prop Tyrel Lomax was needed to replace Tuungafasi. Ioane, to that point, was highly impressive with one strong carry, several telling defensive plays and one lineout steal.

Twelve minutes after Tuungafasi departed, Berry had no choice but to issue his second red to Wallabies flanker Lachie Swinton, who, likewise, caught the eye with damaging defence on debut, after he copped Sam Whitelock with his shoulder to the head.

Debate will rage about Berry's decisions but, if nothing else, he was at least consistent with his two reds.

Despite dishing out 16 first-half penalties, 23 in total, Berry struggled to stamp out cheap shots off the ball as tempers regularly flared.

With the All Blacks hot on attack as halftime approached Berry reduced the Wallabies to 13 men by sending Marika Koroibete to the bin for repeated team infringements.

While the All Blacks drew level at 8-8 before the break through a Jordie Barrett penalty, they couldn't capitalise on their advantage with Koroibete off the field.

Codie Taylor's try from a lineout drive early in the second half edged the All Blacks ahead and the expectation from there was they would maintain composure to close out the victory.

Instead, though, Reece Hodge calmly slotted penalties to push the Wallabies clear and Auckland-schooled prop Tupou crashed over to deliver the final blow.

The victory is sure to breathe life back into Rennie's Wallabies after such a deflating result last week.

While in difficult circumstances the All Blacks will be disappointed with some of their game management when the game was on the line, and the passive nature of their close in defensive work.

In hindsight, with his team playing under fatigue, Foster could have injected the likes of livewire halfback Brad Weber off the bench earlier but after a result such as this he will now have a much clearer picture of his first choice starting side.