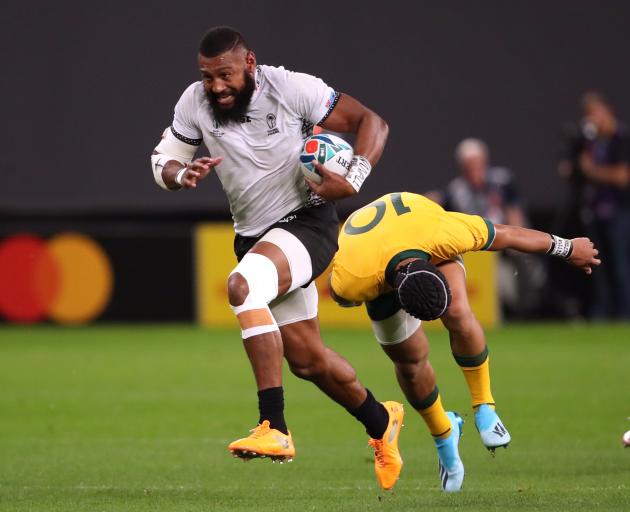 Fiji's Waisea Nayacalevu scores their second try. Photo: Reuters
Twice champions Australia survived an almighty scare in their World Cup opener against Fiji as they fought back from nine points down in the second half to run out 39-21 winners at the Sapporo Dome.

Tries from Peceli Yato and Waisea Nayacalevu helped the Fijians to a 21-12 lead just after the break as a misfiring Australia struggled to turn possession into points and looked to be heading for one of the great World Cup shocks.

However, the Wallabies seemed to sense the danger and suddenly found another gear, hooker Tolu Latu barging over twice in quick succession from driving mauls before Samu Kerevi and Marika Koroibete also went over to put the game away.

The Fijians had promised to be more disciplined and patient in their game with flyhalf Ben Volavola's early kicking pinning the Wallabies back into their half as they started at a frenetic pace.

They established an early 8-0 lead through Volavola's first penalty and a typical counter-attacking exploitation of space with Yato put over in the corner after winger Josua Tuisova broke two tackles.

Australia's forwards, however, began to build into the game and put pressure on the scrum, with one shunt in the Fijian 22-metre area allowing Michael Hooper to get driven over the tryline.

The scrum pressure again told midway through the first half when Fiji had an attacking scrum and big blind side to exploit only for the Wallabies to disrupt it.

Volavola, however, managed to extend the lead to 14-7 with two more penalties before Reece Hodge reduced the deficit at halftime to 14-12 when he crossed after the Wallabies created space out wide following an attacking lineout.

Nayacalevu extended the lead to nine points early in the second half when he pounced on a loose ball in midfield and raced away under the posts, but the Wallabies forwards and replacement scrumhalf Will Genia then took control of the game.

Latu scored twice from driving mauls from attacking lineouts, while their forward dominance and proficiency in the setpiece set up simple tries for Kerevi and Koroibete as they blew the scoreline out.

Australia, who also opened their 2015 World Cup campaign by beating Fiji in Cardiff, next play Wales in Tokyo on Sept. 29 while Fiji meet Uruguay on Wednesday.