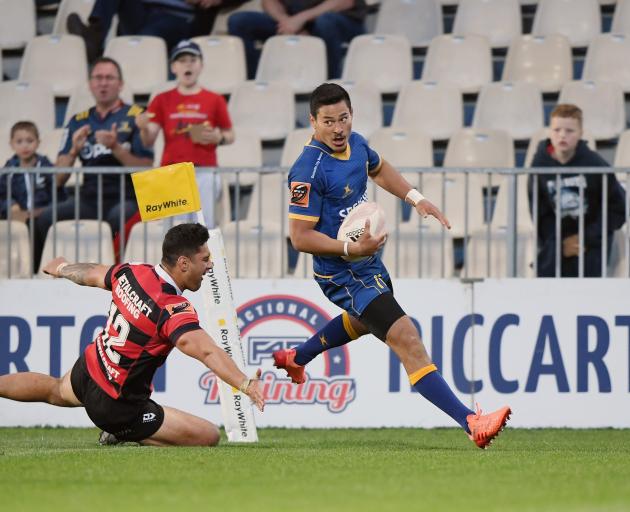 Otago’s Sio Tomkinson runs through to score during his side’s round 8 Mitre 10 Cup match against Canterbury at Orangetheory Stadium in Christchurch yesterday. PHOTO: GETTY IMAGES
Bottle that, put it in the fridge and feast on it for what - 10 years?

Otago scored its first win against Canterbury in 15 years with a 23-16 victory over the red-and-blacks in Christchurch last night.

Wins over the enemy from the north are few and far between, so every one of them has to be treasured.

Otago scored three tries to one and thoroughly deserved the win, showing some real X-factor on attack and putting up an intense and strong defence which strangled the life out of a spluttering Canterbury side.

The visiting side led just 6-3 at the break, but the game opened up in the second half.

No 8 Nasi Manu rolled back the years, popping up all over the park. He was strong with the ball in hand, a demon in the breakdown and emptied the tank in his hour on the park.

Not far behind in the forward pack was prop Josh Hohneck and lock Josh Dickson.

Out the back, Kayne Hammington had his best game of the season at halfback, while outside back Vilimoni Koroi exploded in the second half.

Otago scored the first try of the game early in the second half when debutant flanker Sam Fischli ripped the ball free.

The ball was moved to winger Jona Nareki who fed midfield back Sio Tomkinson who went over.

Canterbury came back with a try to halfback Mitch Drummond, but Manu and Koroi combined down the sideline to score.

Koroi skirted down the line in what was a extremely narrow passage, but stayed in the field of play to score.

The game got back to 16-all with just over 10 minutes left as Canterbury found some points.

But Otago went back on attack, and after moving the ball to the right, came back left; Koroi sucked in two defenders to allow flanker Slade McDowall to score.

Canterbury looked to equalise, but a combination of staunch Otago defence and poor Canterbury attack gave the blue-and-golds the win.

The only disappointing result from the game was hooker and captain Liam Coltman picking up a serious leg injury in the second half, forcing him from the field.

Otago had all the possession and territory in the opening quarter of the game but had nothing to show for it.

The home side was stuck under its own posts for long periods but Otago could not make the most of the advantage.

It would put a couple of nice phases together and then make a mistake, and showed a lack of killer instinct when the opportunity came knocking.

A pass would go wide too quickly, or a lineout was not quite accurate enough.

Josh Ioane had two penalties for Otago in the first half while Fergus Burke replied for Canterbury with just the one penalty.