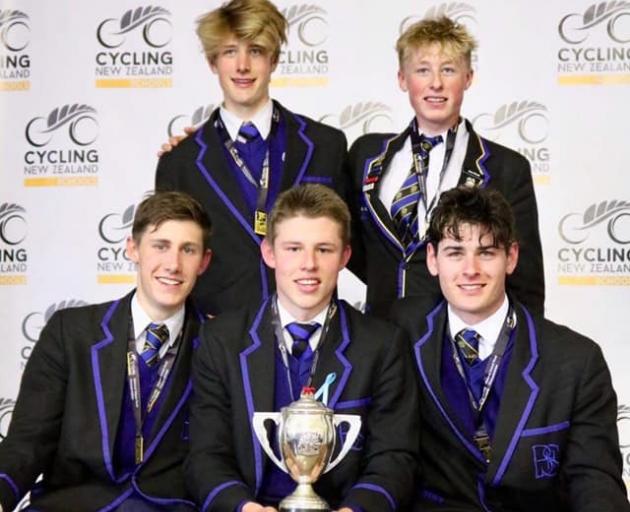 The CBHS under-20 road cycling team have won their age-group title for the second consecutive year. Photo: CBHS CYCLING.
Laurence Pithie showed his class in leading the way for the Christchurch Boys’ High School road cycling team at the nationals at Feilding last week.

Pithie won two gold medals at the junior track world championships in Germany last month and appeared to have no trouble switching back to the road.

He helped CBHS retain the Sir Bernard Fergusson Trophy in winning the under-20 team time trial and then he won individual gold in the under-20 points race and road race respectively.

Christchurch Boys’ clocked 23min 38.97sec for the 16km loop, holding off the efforts of the Cambridge Boys’ High School combination by just 0.031sec – the blink of an eye. Palmerston North Boys’ High School were third at 16sec behind.

Long time mentor Gary McNaughton said he was thrilled with the performance.

“These boys have been with me since year nine and I have seen them grow into fine young men. For them to go back to back is an amazing feeling, with four riders at the end finishing the job,” he said.

“The friendship and camaraderie amongst themselves, their coaches and with me means I consider them family.”

It proved a triple treat for the double junior track world champion Pithie who has quickly picked up his form on the road since his brilliant efforts on the track in Germany last month.

There was more solid team work from his Christchurch Boys’ High teammates in the under-20 Points Race for Pithie to dominate the sprints with 12 points ahead of Watts and Jensen Foster (Saint Kentigern).

It was made doubly challenging as rain fell with the high winds for the boy’s race, which was reduced from 12 to seven laps.

“It was treacherous conditions so I went hard as I knew I could put some pressure on from the start,” he said.

“The Christchurch Boys’ High boys got around me towards the end and helped me bring it home.

“We started off the weekend taking home the gold in the team time trial which set-up the boys well and we were all in good spirits. And we had a couple of boys away in the break today – Griffin Spencer and Guy Yarrell – and it all played out well to bring it into a sprint on the final lap and I took it from there.”