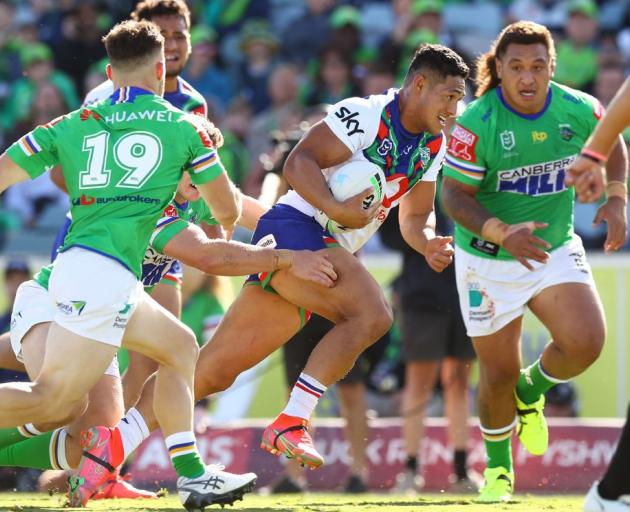 Warriors skipper Roger Tuivasa-Sheck makes a break against the Raiders in Canberra on Saturday. Photo: Getty Images
The Warriors have registered the biggest comeback win in the New Zealand rugby league club's history, reeling in a 19-point halftime deficit to beat Canberra in Ausralia.

An extraordinary defensive effort by the fullback denied Jordan Rapana a match-winning try in the dying seconds, Tuivasa-Sheck diving full stretch to knock the ball out of his opponent's extended arms.

"Roger was outstanding in the second half ... and saving tries is probably more important than scoring them," Warriors coach Nathan Brown said.

Before that drama, Adam Pompey scored the matchwinner in the 77th minute after a length-of-the-field movement by the visitors.

Second-half tries to Kodi Nikorima, Ben Murdoch-Masila, Bayley Sironen, Tuivasa-Sheck and Pompey proved the difference, with Addin Fonua-Blake their only scorer in the opening stanza.

Down 25-6 at the break, the Warriors picked up some irresistible momentum, Fonua-Blake and Murdoch-Masila leading the way and making plenty of metres up the middle.

Murdoch-Masila's 59th-minute try was controversial, the forward almost tripping over gathering a pass from Nikorima, the feeling being it may have been forward.

Cleared by referee Henry Perenara, it proved to be a turning point as the Warriors laid on another two tries.

Earlier, it was all the Raiders despite a number of injury issues.

The home side lost three players in the opening 12 minutes of the match - Joseph Tapine rolling his ankle re-joining the defensive line, while Sebastian Kris and Ryan James clashed heads when making a tackle.

But after conceding the first try, they ran rampant.

Jack Wighton took the line on to score in the 15th minute, before tries to Ryan Sutton, Iosia Soliola and George Williams who all crashed over from close range.

When Williams slotted a drop-goal just before halftime the game looked just about over but the Warriors' extraordinary comeback was yet to come.

"On the positive side for us, to be able to score 30 odd points in one half of footy shows that we've certainly got the makings of the team if we get some other things right," Brown said.

Despite falling at the death, Raiders coach Ricky Stuart was proud of the resilience showed by his injury-ravaged side.

"In all my years of coaching maybe 19, 20 years, I've never been involved in a greater team performance," he said.

"I've never seen a group of individuals down to 14 play so well, but yet, play through such adversity and play for each other.

"We didn't get the points tonight, but I know what changing room I'd prefer to be in coaching tonight and that's my changing room."