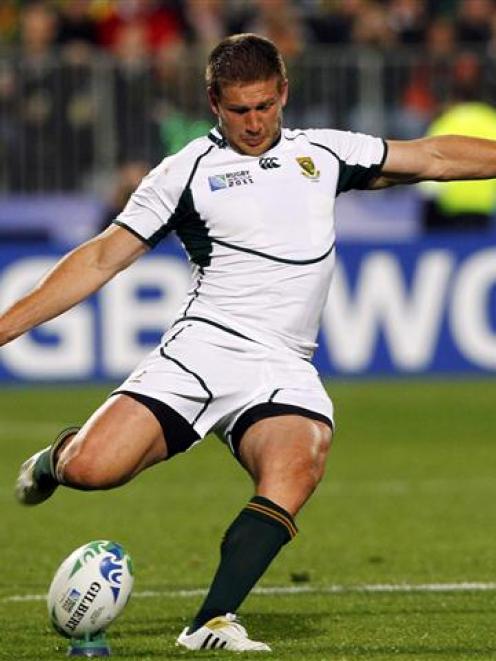 Frans Steyn kicks a conversion against Samoa. He is now likely to return home injured. REUTERS/Mike Hutchings
South Africa's Frans Steyn is likely to miss the rest of the rugby World Cup after injuring his shoulder in the win over Samoa that secured the world champions' place in the last eight, coach Peter De Villiers said.

Steyn, who can play at first-five but is normally a fullback or winger, played in the centres in the bruising 13-5 victory over the Pacific Islanders at Albany on Friday night and kicked a penalty from 55 metres.

Apart from Steyn's versatility, the 24-year-old's ability to convert penalties from well within his own half is a potent weapon in the kind of pressure game that South Africa play.

"Frans Steyn is likely to go home," De Villiers said. "His shoulder isn't that good. The doctor will confirm it 100 percent this morning, but it's 95 percent that he's on his way home and that is a big blow for us."

Bryan Habana, who scored the only try of the game, and fellow winger JP Pietersen also suffered knocks in the match but De Villiers was cautiously optimistic they would recover in time to be available for next weekend's quarter-finals.

De Villiers has spent much of the international season scrabbling around to fill his second row after a string of injuries to locks, however, and bemoaned the misfortune of again being depleted so badly in one department.

"All those kind of guys they've got battle scars and that's all," De Villiers added.

"I don't know what's wrong with us, when we get an injury in one position we get it in one position. We had a lock (problem), and suddenly we lost three wings in one game.

"When lady luck turns her back on us, she turns it properly on us."

South Africa are likely to meet Australia in their first knockout game in Wellington next Sunday.

The Wallabies beat South Africa home and away on the way to claiming the Tri-Nations title earlier this year but De Villiers said his team would be encouraged by Australia's defeat to Ireland in their second pool match.

"It's now about only one game, the only game that can either take you forward or stop you," he said.

"We're playing against the (Tri Nations) champions. That's fine. But Ireland beat them so that's something to look out for."