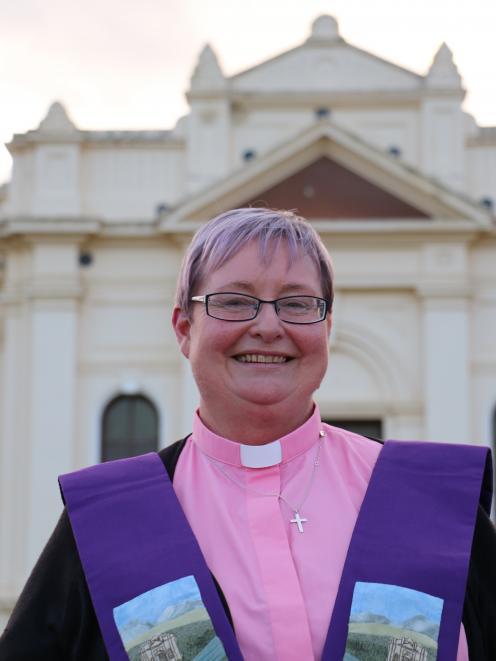 At a service in St Stephen’s Presbyterian Church, Kurow, last Thursday night Mrs Kearon was commissioned as a local

Mrs Kearon, who was born in Australia, said she felt the call to pastoral ministry when she was about 14

and living in Papua New Guinea.

"I just had a real sense that God wanted me to do this and the odd thing is I did not know another female minister," Mrs Kearon said.

"There really was no female model of what I wanted to do."

The only women she knew who were in ministry were some missionaries who lived nearby and her aunt, an Anglican nun.

After thinking about that possibility of being a nun she concluded that was not what God was asking of her.

She immigrated to New Zealand in 1978 and later married her first husband.

In the 1990s when she was living on a farm at Rakaia, the Rev Johanna Van Der Kley was appointed to the Presbyterian church, Mrs Kearon attended.

"She was able to show us what ministry looked like from the inside.

"That was an amazing start for me and things sort of grew together at that point."

By 1997 she had moved to Ashburton and started talking with her church leaders about how she could train to be a minister.

The first step was to put her name forward to the Presbyterian church committee, which selected potential candidates for nationally ordained ministry.

"I was not successful at that stage."

She did win a pastoral assistant position at St Andrew’s Presbyterian Church, in Gore, in 2000 and worked there for several years.

When the contract was finished at St Andrew’s she moved to Invercargill and worked in a rest-home laundry.

In 2005 after marrying her second husband Clive, Mrs Kearon moved back to Gore and busied herself with church activities and other groups including the Gore Farmers’ Market.

In the following 15 years she made several attempts to be considered as a candidate for national ordained ministry but was unsuccessful.

"When you are initially unsuccessful at something you go back to the drawing board and you ask the question is this what I’m still called to do?"

Each time she was sure she was on the right track, so she persevered.

"A sense of call sometimes takes time and patience to evolve and discern."

In 2013 the couple moved to Outram, where she became involved with the Maungatua and Kurow parishes.

Finally the door opened for her to be ordained as a local minister.

"You don’t know the end from the beginning."

It was a great feeling to have reached her dream.

"I am incredibly pleased, delighted and joyful about it."

Even though, in a way, she had reached her ministry destination, she was entering new territory.

"I have a feeling the journey is only just beginning."

Mrs Kearon will continue to live in Outram but will work in Kurow 12 hours a week.