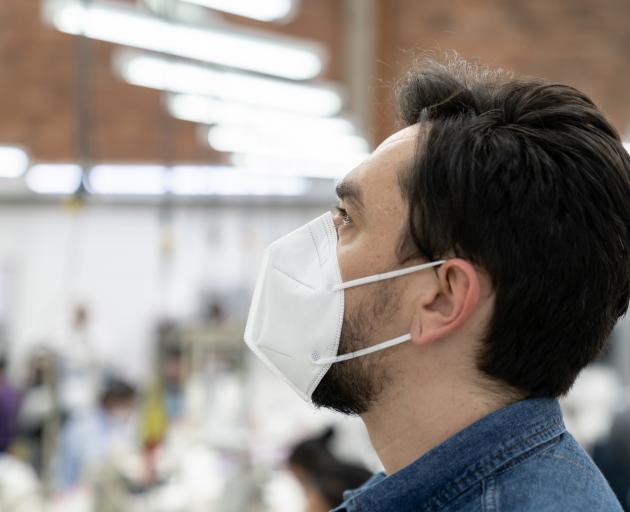 Some experts are saying N95 masks need to be the new standard to combat the Omicron variant. PHOTO: GETTY IMAGES
To paraphrase a former cold war slogan, it is perhaps better red than dead with covid-19.

As Dunedin gets to grips with the challenges of living in Covid-19 traffic light red and people are encouraged to wear a mask in most situations, some experts are questioning what we use to cover up.

On Tuesday the Government announced new guidance for mask use that included requiring masks at food and drink businesses, and when gatherings at work or events were in close proximity.

Alternatives including scarves, bandanas or other clothing were now not enough, it had to be an actual mask.

Workers who were mandated to be vaccinated needed to wear a medical grade mask in public facing roles.

Director general of health Dr Ashley Bloomfield said their guidance for the public was focused on a well fitting mask, whether it was a three layer cloth mask or medical surgical mask or a combination of both.

"We are not going to be recommending the use of N95 [masks] for the general public going about their daily business partly because they are expensive and harder to get."

University of Otago epidemiologist and senior research fellow Dr Amanda Kvalsvig said while the plan outlined by the government to slow the spread of the Omicron variant had a number of strong points, the government needed to move away from its current stance on respirator masks (eg, P2 or N95) which appeared to be that the public would not understand how to wear them.

"This stance would deny New Zealanders one of the most effective protections that they have just now."

Even without instruction, N95-type masks tend to fit better around the face than surgical masks, which typically bunch up at the sides so they have gaps for the virus to enter.

"The Prime Minister has signalled that lockdowns will not be used.

"If that is the case and New Zealanders will be mixing in public while Omicron is circulating, then people must have access to effective masks."

In a Harvard University study, N95 face masks were found to be a more effective barrier than cloth masks in protecting against micro particles of the coronavirus.

Unfortunately, they are in very short supply.

Nationally, St John has sold out and on Monday, five Dunedin pharmacies checked by The Star had none in stock, although Bunnings still had P2 masks, whose specifications are similar to N95.

The Antidote group hoped to have N95 face masks available but was not able to take advance orders and indicated that when stock arrived, it was likely customers would be restricted in the number they could buy. —Additional reporting Gillian Vine

- Chinese New Year celebrations at Lan Yuan, Dunedin Chinese Garden, which had been due to take place on Friday, February 11, have been cancelled due to the Covid-19 Red traffic light setting.

- Access to the Hocken Collections is restricted to University of Otago staff and students under the Covid-19 traffic light Red setting.

This means the public are unable to visit the "Kaleidoscope World: 40 Years of Flying Nun in Dunedin" exhibition at the Hocken Gallery at present.

- The Dunedin Craft Beer and Food Festival, scheduled for February 4 and 5, has been cancelled.

"We respect Government's decision to put the health and safety of Aotearoa first at this point in time."

The festival was originally meant to be held in December last year but was pushed back due to Covid-19.

The games were due to be held in various venues around Dunedin, from February 5-13.

Thousands of people from around the country travel for the games.

The games could only be held if the city was in Orange or Green in the traffic light system.

A statement on the games’ website said the No 1 priority was the safety and wellbeing of participants, staff and volunteers.

- The Farmers & Artists Waitati Market normally taking place this Sunday has been cancelled. The market normally takes place on the last Sunday of the month at the village hub in Harvey St.

- The Waitangi Day Whanau Festival due to take place on February 6 at the Dunedin Public Art Gallery car park in Moray Pl has been cancelled.

- Dunedin’s Music in Parks due to take place at Tahuna Park in St Kilda on February 27 has been cancelled.

- The 2022 Dunedin Home Show due to take place from March 4-6 has been cancelled.

Organisers said they planned to be back from February 24-26 next year.

- Sport Otago’s Dunedin Stride, Ride and Slide has been cancelled. The event was scheduled for Sunday, February 13.

Organisers said the health of the community was of the utmost importance and the socially responsible action was to cancel.

- The South Dunedin Street Festival planned for April 2 has been cancelled. The festival committee said it could not host large crowds during the Red setting and it was uncertain how long it would remain in place.

"We wish to thank all our supporters and everyone who has been working towards the festival."

- The Outram Flower Show has been cancelled. The show was due to be held on February 18 at the Outram Rugby Club.