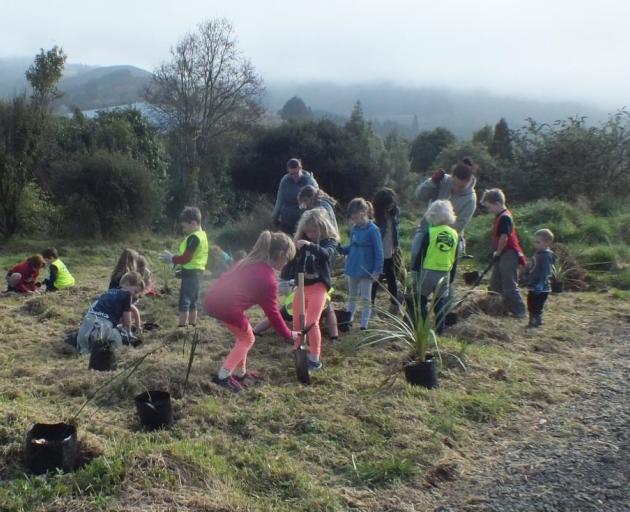 SVA member Anita Zainey said the biodiversity planting project, supported by the Dunedin City Council Biodiversity Fund, had involved working alongside the community and school groups, such as the Sawyers Bay School pupils.

"It has been really great — the children enjoyed getting involved in tree planting with the SVA and connecting to nature at a young age," Ms Zainey said.

"They will get to see the trees grow, which is really great."

The SVA and community groups have been clearing gorse from Cedar Creek and riparian planting, which helps to support native fish species such as galaxiid, by providing shade for the water and keeping it cool.

The planting also helps to filter nutrients from the water, reducing algal blooms in the waterways.

The SVA had built a great community group, the Mathews Track Working Group, which worked to clear gorse and broom, and replace it with native vegetation, Ms Zainey said.

The orchard has been kept spray-free for more than five years.

"The trees are now bearing fruit and it is lovely to see kids and adults alike being able to pick some of the fruit and enjoying it when out and about in nature," Ms Zainey said.

She thanked the council for its support for a broad range of projects through the Biodiversity Fund.