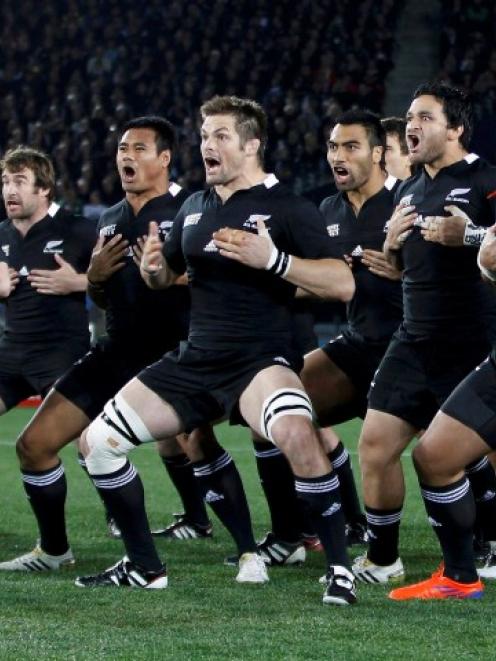 The All Blacks have led the march of the top-seeded teams into the Rugby world Cup quarterfinals. Photo: REUTERS/Phil Walter/Pool
As the better part of 300 battered athletes picked over the scars earned in three weeks of blood, sweat, and yes, even a few tears, the seventh Rugby World Cup had a very familiar look to it on Monday morning.

For all the talk of the rise of the 'minnows', the thrills of a couple of major upsets and more than 50 hours of sometimes dramatic action in 40 pool matches, the top eight seeds duly took up their places in the quarterfinals.

Ireland's magnificent deconstruction of Australia at Eden Park, the first shock of the tournament, may not have stopped the Wallabies from progressing but it did have a major impact on how the tournament will play out.

By usurping the Tri-Nations champions from their anticipated position as pool winners, the Irish helped ensure that hosts New Zealand, defending champions South Africa, Australia and Argentina were all in the same half of the draw.

With England, France, Wales and Ireland battling it out on the other side, the final is guaranteed to be a clash between the northern and southern hemispheres - the lines along which the sport has so often been divided philosophically.

Although none of the second-tier nations have made it through to the business end of the tournament, there is no doubt that progress is being made in improving the base of the game outside the traditional heartlands.

Romania gave Scotland a real scare in the opening week, Japan battled toe-to-toe with France for much of their pool match and debutants Russia gained huge support not just for their pluck but also for the way they tried to play the game.

"It's a lot stronger this time," said All Black coach Graham Henry. "The so-called minnows in this tournament have really made a statement.

"People have been delighted with the rugby that has been played so overall I think the standard has improved over the 20 teams."

The Pacific island teams of Samoa, Tonga and Fiji no longer carry the "minnow" tag and there will be disappointment that none of the three managed to get through to the knockout stage.

Tonga sprung the second major upset with their defeat of France in their final pool game but were unable to drive home their advantage and score the tries that might have taken them into the last eight.

Tonga have, at least, qualified for the 2015 tournament along with the other teams placed third in their respective pools, Scotland, Italy and Samoa.

Samoa saved their best until it was too late in their close defeat to the Springboks, and like many of the less established teams, complained bitterly about the short turnarounds they had to cope with.

There was no doubt that there was an imbalance between the establishment, who played mainly weekend-to-weekend, and the likes of Samoa, who ended up playing their first three matches over just 12 days.

"Stop exploiting my people. Please, all we ask, is fairness. If they get a week, give us a week. Simple," Samoa centre Eliota Fuimaono-Sapolu said in one of his less strident posts on Twitter. Others compared the injustice to the Holocaust.

The tournament derives a majority of its revenue - and therefore the funding for developing the game - from television rights, which causes some problems for scheduling.

The sport is desperate to grow but another factor cited frequently by the non-establishment teams that legislates against improvement was the lack of playing time against good opposition between World Cups.

"We are making some good progress but we need games against the top level," said Canada coach Kieran Crowley.

But for now, the plight of the lower tier nations is put to one side as the elite prepare for the start of the knockout stages on Saturday.