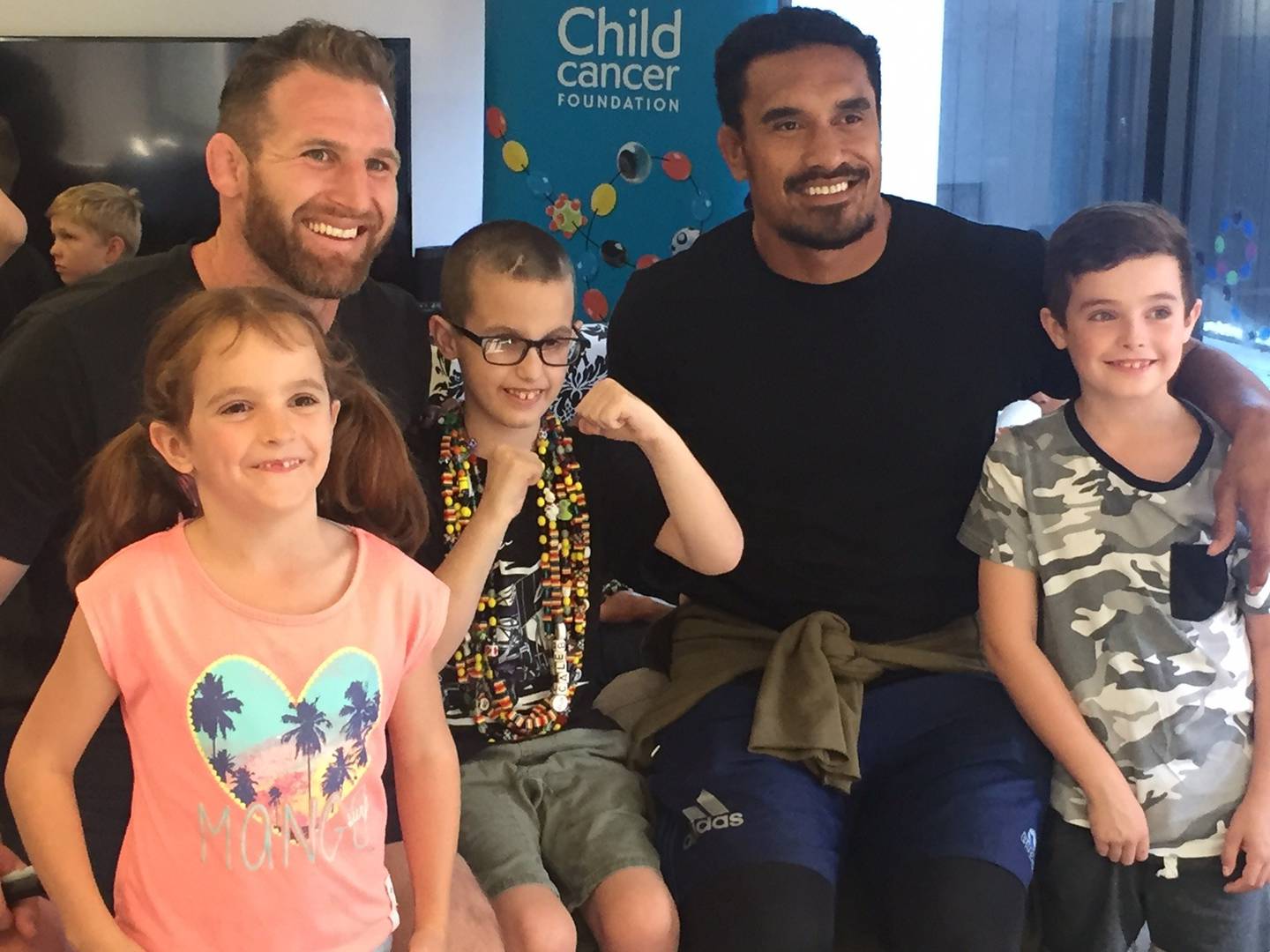 Caleb Wright, centre, pictured with former All Blacks Kieran Read and Jerome Kaino, and Brooke Wright, left, and Noah Wright, in 2017. Photo: Kurt Bayer / NZH
A Christchurch boy who suffered a major brain trauma then became an inspiration to others through his selfless actions and the co-captain of the New Zealand Wheel Blacks are just some of the people to be celebrated at this year's Attitude Awards.

The awards honour the achievements and successes of Kiwis living with disabilities.

The awards - across eight categories with 24 finalists - will be announced at a black tie gala in Auckland on December 2.

The Herald on Sunday spoke to some of the people being recognised.

Caleb has brushed major brain trauma to the side and not only defied the odds to survive, but re-learned the basics of life. He now attends school and karate, and is providing inspiration to others.

The 13-year-old, a Child Cancer Foundation ambassador, created a joke book and, after the Covid-19 level 4 lockdown halted production, arranged for the book to be downloaded for free.

This helped provide Caleb's favourite medicine of comic relief to children who might be struggling with lockdown, and he's been working hard to distribute the downloads, including providing signed copies to young people in hospital.

This year Caleb's also raising awareness of Wig Wednesday and has challenged himself to get 20 businesses signed up to the cause.

An accident that left him paralysed aged 15 took Everson's sporting dreams away in an instant.

Now 24, he's used his mental strength to build up his physical strength, and is now the co-captain of the New Zealand Wheel Blacks.

The current chief executive of Workbridge, Mosen has been blind since birth and has a degenerative hearing impairment.

The 51-year-old's one of the few disabled chief executives of national disability organisations and introduced new initiatives, including accessible kiosks and digital channels during the lockdown.

He's been chairman of the Blind Foundation and president of Blind Citizens New Zealand and also successfully advocated for a change in the law governing disabled people serving on juries, as well as achieving a law change to the Copyright Act that was emulated worldwide and became an international treaty.

Mosen is also founder of ACB Radio, the global internet radio network for the blind community and has a podcast - Mosen at Large - about disability issues.

Born with spina bifida, Winterburn relies on crutches full-time. He has fused ankles and all his feet are pinned - his knees are where his functionality ends.

He runs his own furniture restoration business "Furnichur" which focuses on mid-century restoration.

Until the Covid-19 lockdown he also ran his own Airbnb catering for tourists walking the Tongariro Crossing.

When the lockdown closed down his Airbnb he was quick to crank up his 3D printer to make face masks.

She lives for the everyday challenge that pushes her to be more determined.

A constant role model for disabled and non-disabled artists and audiences, the 52-year-old shows that with the right determination anything is possible.

He's worked at the Blind Foundation at Kilwell Sport as a factory handyman for 41 years.

He's also been part of the Rotorua chapter of Achilles International - which supports people with disabilities participating in mainstream athletics - for five years.

Tuki's supported individuals and members of both Achilles and the Blind Sports Association to improve their self-esteem and confidence, and the experience has helped them set and achieve goals in other areas of their lives.

That support has especially helped some young male members come out of their shells and increase their social skills.

A Kiwibank Local Hero in 2019 and Geneva Supreme Support Worker in 2018, Hogg continued her tireless efforts as support worker, advocate, local area co-ordinator, board member, volunteer and a friend to many people and communities impacted by disability this year.

During the level 4 lockdown Hogg helped families apply for food grants, as well as providing phone support to a number of people.

The 47-year-old's volunteered for various organisations, including as a Habitat for Humanity director since 2017 and Koha Kai board member and chairwoman.

She's taken the time to build trust with people others have given up on by building rapport and listening, and moving forward at the speed of the person she engages with.

One was a young person who hadn't left their room, but was able to successfully begin employment due to Hogg's coaching.

Goodwin is passionate about developing innovative ways to support whānau with disabled children, including their inclusion at school and helping parents to co-design solutions to their challenges.

The 60-year-old also provided a lifeline during the Covid-19 lockdown for parents of disabled children.

She's the convenor of Awhi-at-home, a Facebook page supporting parents 24 hours a day.