My Covid confusion: Why users are getting vaccine pass error messages

OPINION: Here's a couple of web development lessons for Chris Hipkins: pre-launch testing and simulations often don't give any indication of how a site will perform under a real-life crush, and things never work out well when they're rushed.

The Covid Response Minister said he was able to download a My Vaccine Pass fine yesterday.

But that meant nothing. It's like the Minister of Transport driving down a new stretch of motorway the day before it's open to the public, and declaring there were no traffic issues.

Just managed to get a Vaccine Pass fine, but a lot of others had issues, especially this morning.

There's no where to use it yet, so no rush https://t.co/6b0M1xHJOe pic.twitter.com/k8S8mFh5kX

People who have attempted to register for a pass this morning have been met with site-busy messages, or various variations on "something went wrong" pop-ups that could indicate either overloading or rushed development (if a new stretch of road is built to an extreme deadline, there will be potholes).

As Hipkins tells it, the site for requesting a My Vaccine Pass has a ton of capacity.

The Covid Response Minister told Mike Hosking earlier this morning that the site could generate up to 200 proof-of-vaccine certificates per second.

A registration freeze this morning, with a wheel spinning for 20-minutes plus as a Herald editor tired to enter his verification code. Image: NZH
That translates to 12,000 My Vaccine Passes being downloaded per minute, or 720,000 per hour - enough to provide all of the 3.4 million eligible people with a pass within five hours.

While 200 certificates per second would be impressive, the MoH could not immediately respond to questions over how many people could access the My Covid Record site at once - the portal where you go to register to receive a My Vaccine Pass - which includes a QR code to store on your phone, or a posted-out printout of a QR code to carry in your pocket (a hardcopy can be requested by phoning 0800 222 478).

Many of the overloading errors were generated before 8am, but even at 8.30am a Herald editor requested a verification code as part of the sign-up process, only to encounter a wheel that spun on his screen for 20 minutes and counting.

Another person told the Herald it took her three hours to get to the request page.

It also doesn't help that the MoH has changed the URL (website address) for My Covid Record, or that RealMe - the Crown-backed verification system that lots of people have reported frustrations with over the years - and over the past few months - is used as a verification and log-on option.

Another error message from this morning. The Ministry of Health could not immediately say if errors were the result of overloading or bugs in the system. Image: NZH
Why so slow to start work?

Last week, Spark's Mattr subsidiary revealed it had won the tender to create the technology that underpins My Vaccine Pass (Mattr does not run any of the portals involved; the My Covid Record site is managed by the Ministry of Health).

Technology experts canvassed by the Herald had no issue with Mattr winning the work - but they were seriously concerned that the contract was only signed on October 13, according to a timeline supplied to the Herald by the MoH, following a request for proposals issued in July and an analysis of seven shortlisted companies in September. The experts said the process should have kicked off earlier this year, or even last year.

Asked about the timing, Ministry of Health group manager national digital services Michael Dreyer said, "The use of vaccine certificates is a significant decision and we took time to assess their effectiveness and use overseas before the decision was made to use them."

Hipkins said in a statement issued at 7.41am, "People can log in from later this morning, but we're asking for patience and for people to wait for a couple of days to ease any demand on the IT system and call centre staff." 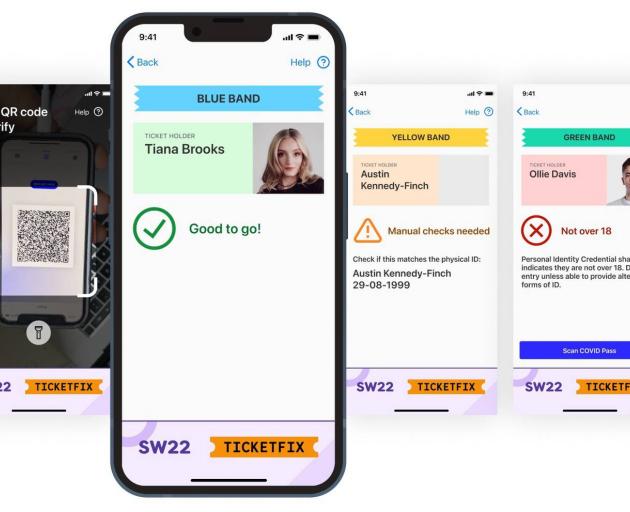 A Mattr mockup of how the vaccine pass technology could look when integrated into an organisation's own app - in this case, a ticket agency. Image: Supplied
I was able to request a Vaccine Pass without problems at around 11am, which was then emailed to me, with a link for adding it to the Apple or Google Wallet on my smartphone. It showed up in my Apple Wallet, below my credit card, after I clicked the link.

The email also had my Vaccine Pass attached as a PDF which can be stored on your device or printed out (if you're totally non-digital, you can phone the Ministry of Health and request a printout be snail-mailed to you).

A Vaccine Pass can also record if you are medically exempt.

Although I had plain sailing, a number of readers continued to report problems as midday approached. They ranged from glitches - including one who had only had the second of their two doses appear on the system - to underlying problems. Others stalled in the process because they were not NZ citizens (the ministry says visitors to NZ will be able to display their country's equivalent to our Vaccine Pass).

So regardless of my success (and 60.000 others able to download a Vaccine Pass, according to Prime Minister Jacinda Ardern at her 1pm briefing), it does make sense to follow Hipkins' advice and give the My Covid Record site a swerve for the next few days - because, for the time being, there's nowhere to use it.

The Covid Response Minister says the legal framework around vaccine passports is to be passed by Parliament next week and for vaccine passports to be in use before the end of the year as the country moved into the traffic light system.

Once everything's in place, a venue will then be able to use the Government's official verification app (still in the works) to scan your My Vaccine Pass QR code.

The MoH has also released an API (application programming interface) that will allow the likes of gyms, hospitality venues and travel agents to incorporate a My Vaccine Pass QR code reader into their own apps.

Your Vaccine Pass will be valid for six months. The limited term reflects the fact that your vaccination status is a moving feast with booster shots pending.