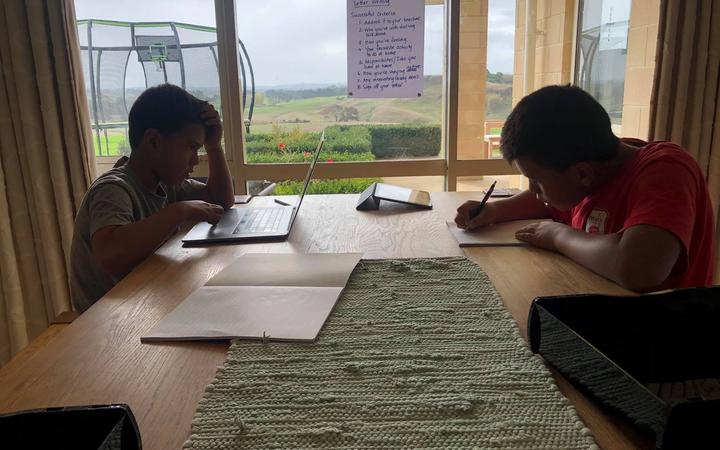 Children being homeschooled under the Covid-19 alert level 4 lockdown. Photo: RNZ / Eden Fusituá
The Covid-19 pandemic has driven the biggest-ever increase in home-schooling enrolments, with 619 more children learning from home in July this year than at the same time last year.

The jump to a total of 7192 children followed several years in which home education has been rising by about 200 per annum.

But home educators told RNZ they had expected a much bigger jump following the national lockdown, which forced 800,000 school children to learn from home.

"I was quite surprised because we were expecting a tsunami of enquiries coming through and a tsunami of people wanting to find out more about home-schooling, but we didn't actually," Koit said.

He suspected many of the families that switched to home-schooling this year were probably already on the cusp of doing it anyway.

"If they were for example considering home-schooling but weren't quite sure and then Covid came along and gave them a little push if you like and found the scenario worked for their family and for their children and then decided 'hey, I can make this work'."

A lot of people were interested in home-schooling but it was difficult for many families to actually follow through and do it, he said.

"I'm not so surprised that there weren't more who went though because of the situation in New Zealand where so many folk are now locked into a two-family income requirement that they're not able to make other choices. We have a lot more people wanting to go home-schooling in the long-term than are actually able to do that."

The Ministry of Education's figures showed more than 1666 of this year's home-schoolers had been home-schooled for less than a year, an increase of 283 over last year.

Parent of four, Amanda Pewhairangi, said she and her husband had been thinking about home schooling for years before the lockdown forced it on them and thousands of other families at the end of March.

The experience convinced the family to home-school their two eldest boys next year.

"We'd been thinking about it since they were very little. I guess we weren't brave enough to try it as well, part of that thinking 'we couldn't do it', but lockdown, we had to do it, we stepped up, and it worked," Pewhairangi said.

The boys were at a great school, but learning at home was even better, she said.

"We just noticed a big change in the boys, they were a lot more relaxed.

"We were still getting stuff from the teachers but they were able to do it at their own pace and at a time of day that seemed to suit them. It was more them leading their learning and we noticed a big change with that."