Unknown gold miner to finally be laid to rest

By Jared Morgan
0 Comments
Funeral notices are to be published for an unknown gold-miner more than 140 years after his death as preparations for his burial next week enter their final stages.

The funeral, to take place on May 14, will give the miner, who has been exhumed twice from his grave in the Cromwell Gorge, a final resting place in Cromwell Cemetery.

The funeral notices would be published in the Otago Daily Times on Saturday and Allied Press community newspaper The News next week, Affinity Funerals funeral director Lynley Claridge said yesterday.

Mrs Claridge, who initiated the idea of holding a funeral for the man her business had dubbed "The Gold-miner" after first reading about him in the ODT in February, said his story had touched her.

"It’s such a privilege. It feels really special to bring him home."

Affinity Funerals, in Alexandra, took delivery of the man’s skeletal remains last week after weeks of planning with the University of Otago archaeology department, the Central Otago District Council, Contact Energy and other stakeholders.

The remains had languished in the university’s anatomy department since 1983 after being exhumed during archaeological work while the Clyde Dam and State Highway 8 were being constructed before the flooding of the Cromwell Gorge.

It was discovered the man’s remains had been disturbed before by grave robbers, most likely shortly after initial burial.

Mrs Claridge said that since contacting the parties involved and getting them to agree to the idea, Affinity had been preparing a funeral for the man. 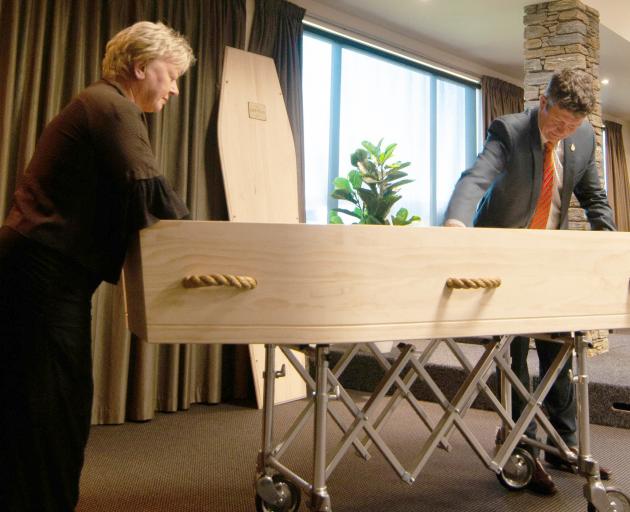 Affinity Funerals funeral directors Lynley Claridge and Gary Wybrow work on final preparations for the burial of a gold-miner some 140 years after he died. PHOTO: SHANNON THOMSON
The planning had gone well, other parties such as the Otago Goldfields Heritage Trust also getting involved, and the service would be held at 11.30am on May 14 at Cromwell Cemetery.

"It’s a very very precious funeral because this gold-miner has become representative of all the gold-miners that lost their life, drowning in the river and
in the harsh conditions of the gold-mining period."

The miner was placed in a pine, calico-lined casket with rope handles — in keeping with the period he died in — on Tuesday.

Funeral director Gary Wybrow said he and a colleague had been "privileged enough" to receive the remains of "our gold-miner".

"We made a concerted effort to anatomically arrange his skeletal remains as accurately as possible ... maintaining that level of respect and dignity that everyone deserves to have."

The miner would be taken from the trust’s headquarters on a dray as part of a funeral cortege, a traditional procession, through Old Cromwell, across the town to the cemetery.

The procession would also feature walkers and horse riders in Victorian garb.

That period theme will dominate the service to be presided over by Anglican Archdeacon of Central Otago Damon Plimmer.