By John Cosgrove
0 Comments
He may be called Shrimpy Boy – but his field of expertise is far removed from eating crustaceans.

Instead Jayden Jackson races drones at speeds of up to 190km/h, requiring him to memorise racing circuits, learn how to navigate them in the shortest time and have excellent hand-eye co-ordination.

The drone racing pilot is the first New Zealander to be invited to join the Drone Champions League in Europe.

The 25-year-old Lincoln builder's dream of racing "first person view" drones on the global stage became a reality when he was named in the SDT Euroflytec drone racing team, based in Spain.

He said it was a bit of a shock to see his name on the team list.

“Somehow, my name came up first in the draft – it blew me away and I couldn’t believe it,”  Jackson said.

“The British team said they would like to talk to me but the Spanish team called first.” 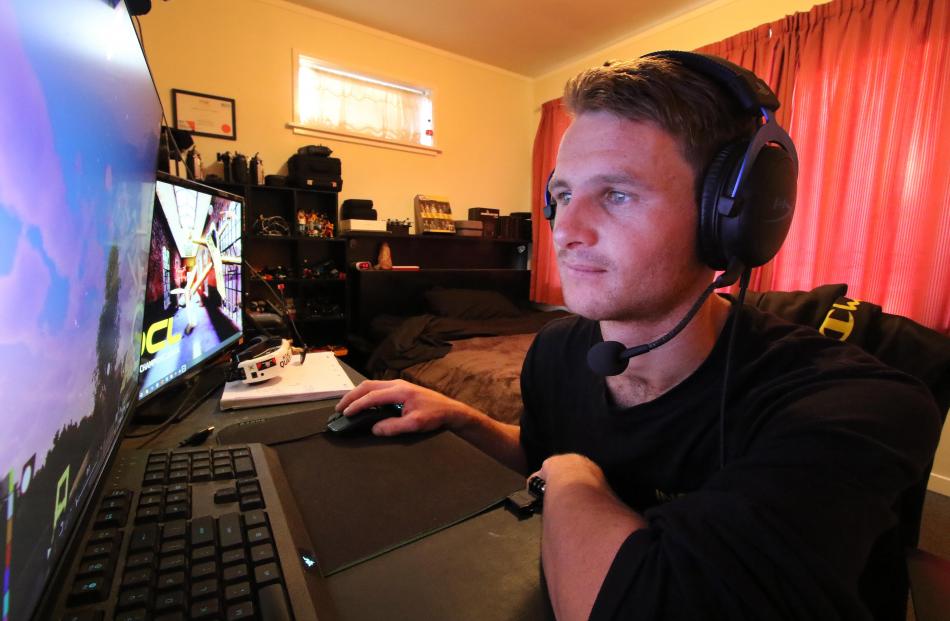 Jayden Jackson competes online against 72 other drone pilots from around the globe to be one of the fastest seven to race in the drone champions league grand prix. Photo: John Cosgrove
Drone racing is one of the fastest-growing team sports in the world - and the Drone Champions League is attracting a lot of global attention.

All the drone racers attempt to qualify for the final with only one hour of practice on purpose-built tracks that vary in complexity from race to race.

The four fastest from each team win the chance to race in the final grand prix event.

“So the competition is crazy for those slots,” Jackson said.

To find the best of the best worldwide, aspiring drone FPV racers compete on the league’s drone racing simulator online, trying to earn the fastest time on the circuits offered – all within a strict seven-day window of competition.

Jackson said anyone, anywhere has the chance to compete.

“But first you have to make it into the top 300 worldwide. That’s made up of the top 200 pilots from the pc steam gaming software and the top 100 of those playing on Xboxes and Playstations.

“You race again and then the final 100 pilots selected have five attempts during a 24-hour window of opportunity to be the fastest around the track. From those results the draft comprising of the top players are selected.”

Before Covid-19 forced the hybrid indoor/outdoor sport to go online, competitors only used the game to qualify for each actual race, now this form of hybrid racing is used for the real grand prix too.

“It’s an awesome prospect and it has been my dream since I started in the sport two years ago,” Jackson said.

The physical racing drones are custom-built and made purely for racing. They can’t be bought off the shelf.

Each drone is hand-made by the teams using cutting edge  technology, electronics and software.

“The drones are one of a kind. They’re custom-built and very fast, full of titanium and carbon fibre. It’s all the computing in them, they’re a different kettle of fish to the DJI’s most people think of when you say you fly a drone.”

The pilots use integrated goggles, which relay the picture from a wireless video camera mounted on the nose of the drone to the headset. It allows the pilots to make course corrections in a fraction of a second using a hand-held controller. The ones with the best hand-eye co-ordination win.

“It’s either get it right or you crash. At the speeds we travel at, there are no second chances,” Jackson said.

Like the car racing world, Jackson said drone racing is all about the amount of time spent practicing and ensuring your hand and eye co-ordination is fast enough for the speeds raced at. He spends as much time as he can training online and races real drones in the red zone most

“Races are timed and won by the smallest of margins – 100th of a second in many cases,” he said.

The actual drone races are held on circuits that vary in length and force the pilots to corner at high speeds, dipping down under barriers or flying through gates.

Each race may only take a couple of minutes, but the concentration needed to win makes it a very exhausting experience.

“I’m keen as to get over to Spain but current Covid restrictions there mean I’m still here practising and trying to speed up my pace while I work as a builder to make ends meet until I get the call to come over,” he said.

Jackson said he is also developing a creative eye by working his bigger slower drones as race cameras at motorsports events.