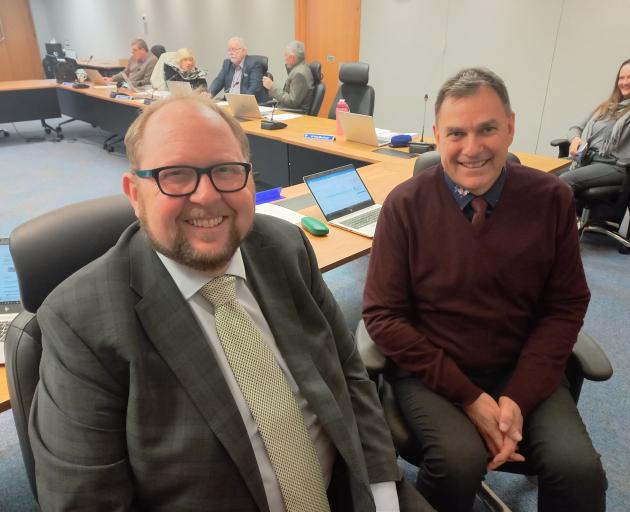 Waimakariri Mayor Dan Gordon and acting chief executive Jeff Millward prepare to get down to business. Millward has been appointed acting chief executive following the departure of Jim Harland and is expected to remain in the role until a new boss is appointed next year. Photo: David Hill
Waimakariri's mayor is in line for a payrise after October’s local government elections.

Waimakariri District Council voted to accept the revised elected members salaries and expenses, which have been set by the Remuneration Authority, at a council meeting on Tuesday.

"This is a matter the council doesn’t really have a choice on as it’s set by the Remuneration Authority," Mayor Dan Gordon said in support of the motion.

The mayor’s salary and payments for community board members are set by the Remuneration Authority, while the deputy mayor’s and councillors’ salaries are paid from a remuneration pool.

Councillors are expected to receive an increase of around $5000, with a post-election salary of $53,986.

Community board chairpersons and members are also set for a small payrise.

Fees for serving on a hearings panel have also increased for the first time since 2011, with the chairperson’s fee increasing from $100 to 116 per hour and members from $80 to $93 per hour.