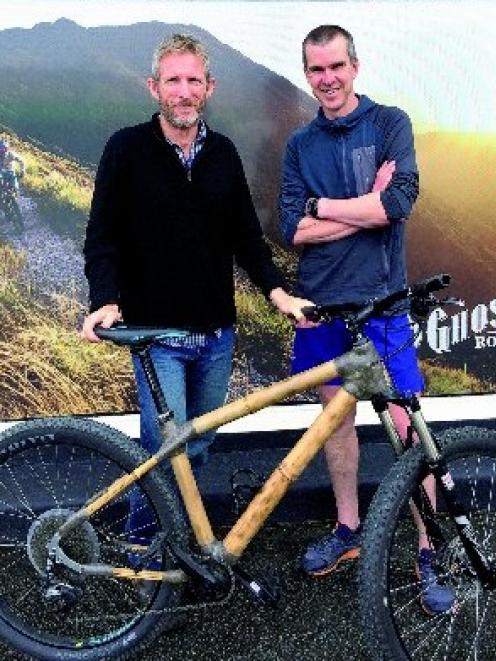 The idea of building bikes out of bamboo came about when he was looking for a project.

Mr Irving has an engineering background and ‘‘a desire to build stuff’’.

He started out a few years ago with a bamboo road bike kitset he ordered from England, assembled and then spent the summer riding. He next decided to see what a kitset mountain bike would be like.

His teenage godson saw the finished product and requested one.

It was then that Mr Irving decided it was time to put his own skills to the test. He found some suitable bamboo from Little Whanganui and left it to dry for six months before it was ready to be constructed into a frame.

The other components from a second-hand bike were transferred to the new bamboo frame, which is held together with hemp and hessian fibre and epoxy glue. He was happy with the result.

Mr Irving, who is involved in the William Pike programme at Westport North School, took the bike on a school trip through the Heaphy Track with another supporter and friend, Richard Nichol.

During the trip they swapped bikes and Mr Nichol was so impressed he ordered his own bamboo bike from Mr Irving.

The completed bike has now been officially handed over.

Mr Nichol also bought a second-hand bike for parts, although Mr Irving is also having some parts custom made in Christchurch.

The next bike project will be for Mr Irving’s daughter, Ana.

He said there was potential to turn the bamboo project into a business but it probably would not be viable, given the 50 to 60 hours it took to make a bike. He noted that many bamboo kits were now available on-line and many kits came from the likes of Ghana, where the work supported communities.

Mr Irving said he was negotiating with the English company from which he previously purchased to perhaps set up a franchise in Westport which could run weekend bamboo bike-making workshops, followed by a ride through the Old Ghost Rd.