Jet boat bridge stunt 'has gotta be in New Zealand' 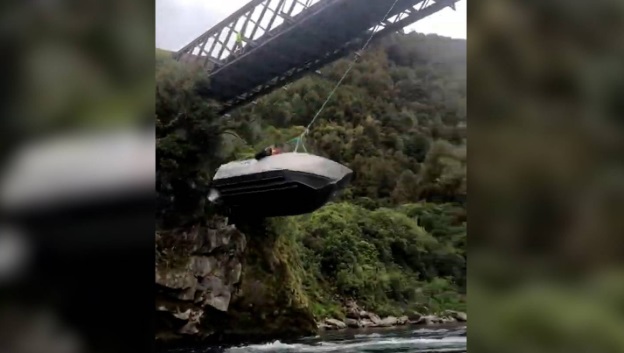 The extreme antics have won thousands of admirers, but officials warn that those involved have put themselves at risk - and potentially compromised the safety of everyone that uses the bridge.

The video shows an aluminium-hulled mini jet boat tied to the historic Iron Bridge over the Buller River.

As the boat accelerates, the rope tightens and the small craft is launched into the air.

Comments on the viral post were full of keen boaties suggesting the activity to their mates, while others noted that the activity posed a risk to the people involved - and to the engine.

"Easy way to cook the motor," one man said.

"This is why women live longer than men," said one commenter, who added: "Also hold my beer and watch this".

"That's not good for the bridge, the boat, the motor or the rope, but by God that's funny," said another.

There was some confusion from international fans over the source of the video but one American enthusiast had it right.

"This has gotta be in New Zealand," he said, "only place they do that crazy s**t".

The video was originally posted on You Tube, and is one of several from the same user showing similar high-octane antics.

The jet boat was first built in NZ by Sir William Hamilton, who designed the boat to navigate our fast-flowing and shallow rivers.

They are used extensively in New Zealand for racing, recreation and tourism, but Jet Boating New Zealand Association spokesman Paul Mullan told The New Zealand Herald: "Jet Boating NZ doesn't have bridge swinging as any of its activities within its organised events and doesn't plan to include it in the future."

Both Maritime NZ and Waka Kotahi have spoken out against the actions seen in the video, warning that it risks the safety of those involved and the wider public.

A Maritime NZ spokesperson told the Herald: "Based on the limited information provided by what is shown, as a safety regulator we would have clear questions about what steps have been taken to ensure the safety of those on board, which is always the skipper's responsibility.

"In the event of an accident, injury or a fatality, the skipper or others could also be found liable, pending investigation by the relevant authorities."

"Road and rail bridges are not designed to take point load stresses on the steel beams at singular points as occurs with this illegal and dangerous activity. It could compromise the strength and performance of the bridge, potentially endangering everyone who uses it.

"People engaging in this activity could potentially be prosecuted for a range of offences. Waka Kotahi encourages anyone who observes such behaviour to report it immediately to police."