No sign of refunds from a local ticket agency 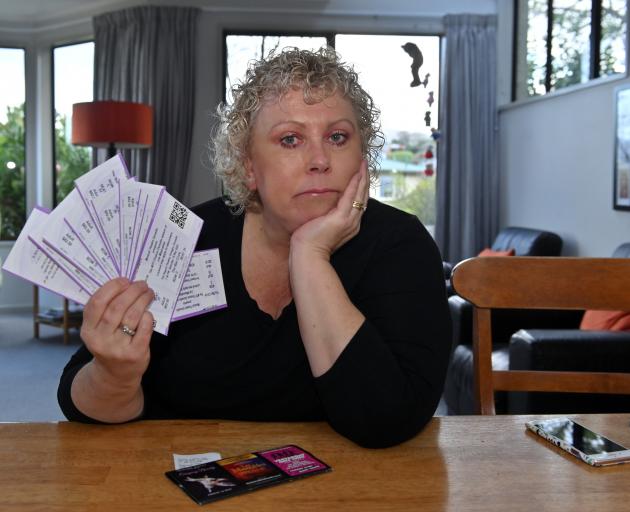 Hoping to get a refund for $860 spent on tickets to the cancelled Les Miserables show at the Regent Theatre is Dunedin woman Denise Davidson. PHOTO: LINDA ROBERTSON
Denise Davidson just wants her money back.

After months of emails, calls, and angst, the Dunedin woman is still out of pocket to the tune of $860 after a local ticket company went to ground and failed to give her a refund.

Ms Davidson bought ten tickets, costing $860 in total, to see her daughter perform in Les Miserables at the Regent Theatre in March.

The show was cancelled as Covid-19 brought the events industry to its knees.

She bought the tickets through Ticket Rocket — formerly TicketDirect — a company started by Dunedin businessman Matthew Davey in 1999.

After three months of unsuccessful attempts to contact the company through an email address and a disconnected 0800 number, she was still waiting.

"With other companies they might still have your money, but at least you can still contact them — these guys are completely unreachable."

She did receive an email from the company one month ago, which said if she provided her bank account, a receipt and copy of her tickets, a refund would be given.

"I’ve heard nothing since and there’s no money in my account.

Unable to reach Ticket Rocket, she visited the Regent Theatre.

A staff member said the money was in the hands of the company.

"Interestingly, I was booked for another show through Ticketmaster, The Book of Mormon, which was cancelled, and got a refund in three days."

A post on Ticket Rocket’s Facebook page dated May 13 said a team had been "working diligently" to provide options for ticket holders, including refunds.

The post had attracted more than 100 comments yesterday, many from other customers indicating they were still waiting on refunds from the company.

The Regent Theatre did not respond to requests for comment yesterday, but its website stated customers who booked through Ticket Rocket would receive a full refund within 60 business days.

Consumer NZ consumer adviser Maggie Edwards said customers should be entitled to a refund, and any customers who had not received one were eligible to go to the Disputes Tribunal.

"If you can show you’ve contacted them repeatedly through an email trail, you can start to build a case."