A male sea lion was unlucky in love when he mistook tyre tracks for those of a female sea lion and ended up on a busy Dunedin road.

His persistence went unrewarded as he later ended up on the road for the second time that day.

The incident has prompted a warning from the Department of Conservation (Doc) concerning the use of vehicles on beaches and dunes.

Police were called to assist with traffic management, but by the time they arrived a member of the public had ushered the sea lion off the road. 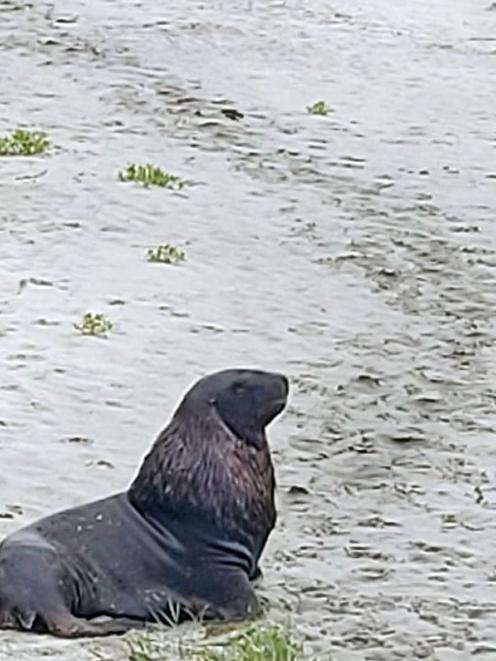 A male sea lion in Dunedin was misled through marram grass while trying to find a mate and took a seat on a busy road. PHOTO: DEBI RIDDLE

Mr Fyfe said later in the evening, Doc was notified the sea lion had returned to the same spot on the road.

Rangers investigated why the sea lion had ended up on the road twice, thinking there might have been females hiding in the nearby dunes.

"We had a search around and found no sign of female activity in the area, but there were quad bike tracks that had come up off the beach and through the marram grass."

The tracks had flattened the grass in a way very similar to way a sea lion’s flippers would have, Mr Fyfe said.

"We suspected the male sea lion had followed the quad bike tracks ... and ended up following the tracks through the dunes and on to the road."

Male and female sea lions played a game of "cat and mouse" during breeding season, he said.

"The females are hiding from males and males are looking for clues — in this case he thought he was on to a good one."

While the particular male involved had realised there were no females at the site and had left, it could happen again, Mr Fyfe said.

He reminded people to keep vehicles off beaches.

"It’s happening a lot that we get quad bikes, trail bikes and vehicles on beaches wherever they can gain access to it," Mr Fyfe said.

"It’s a good example of how human activities can interfere with wildlife processes."

A gradually increasing sea lion population around the Otago Peninsula meant their "youthful energy" was more prevalent around coastal spots, he said.

"You’re getting playful, locally born and bred sea lions, on their own for the first time. That’s a lot of naive sea lions exploring the world.

"It’s important we continue learning how to live around them."

He advised people to call Doc and police if they came across a sea lion blocking the road.