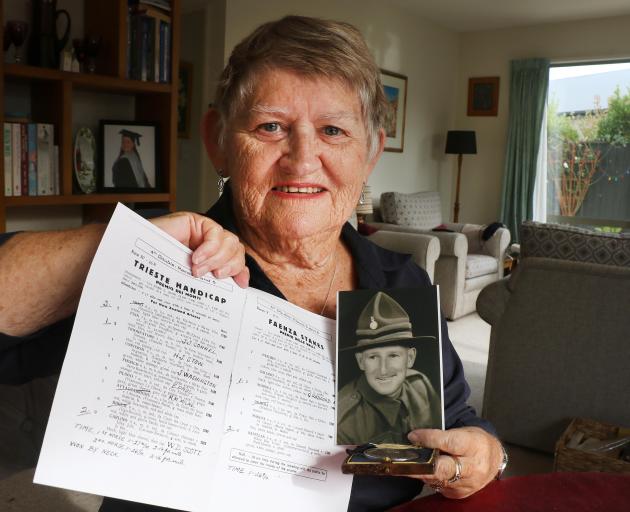 Anne Ny with her father Walter Scott’s WW2 memorabilia, including the Trieste Handicap race programme and his second place medal. Photo: Star Media
After marking Anzac Day on Monday, Anne Ny writes about talking to her father Walter (Wattie) Scott and the famous trotting race he and other New Zealand troops organised in Trieste, Italy, just after the war in Europe ended.

A group of sappers from the 2nd NZ Engineers Division got together over a wine one evening. It was 1944. They were resting after a day building a bailey bridge over another river in their drive north through Italy.

The idea of holding a trotting meeting in Trieste when the war was over was seen as a fitting celebration to end the Kiwi soldiers Italian campaign. Lieutenant General Sir Bernard Fergusson agreed to be the patron for the event.

Sir Bernard later became the 10th Governor General of New Zealand between 1962-1967. There was a group of us who held NZ harness racing driver’s licences and had trained and worked horses before the war and were keen on the idea. 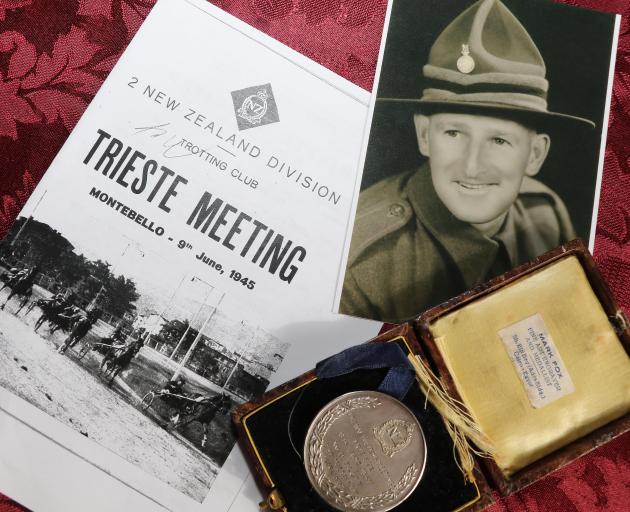 A photo of Anne Ny's father Walter Scott with the Trieste Handicap race programme and his medal. Photo: Star Media
I said to dad: “Where were you going to get horses during the war to have a race meeting?” Ahh! My dad replied: “We had thought about this well before hand. A group of the boys contacted Italian trainers near Trieste in 1944 and asked them to keep their horses in training. No race meeting without horses.”

“Did you and your mates speak Italian?” I asked. “How did you sort this out?”

“We definitely had our challenges. Our Italian was pretty basic and we had our difficulties attempting to convince the Italian owners and trainers that the horses would be in capable Kiwi hands,” said dad.

“A fortnight before the race meeting at the Montebello racecourse in Trieste, a group of us met each morning before we worked our horses on the track.”

“Gosh dad!” I said, “weren’t you a bit rusty after all that time away from racing?”

“No, not at all, it came back to me, like driving a car, I guess. Something you don’t forget!’ 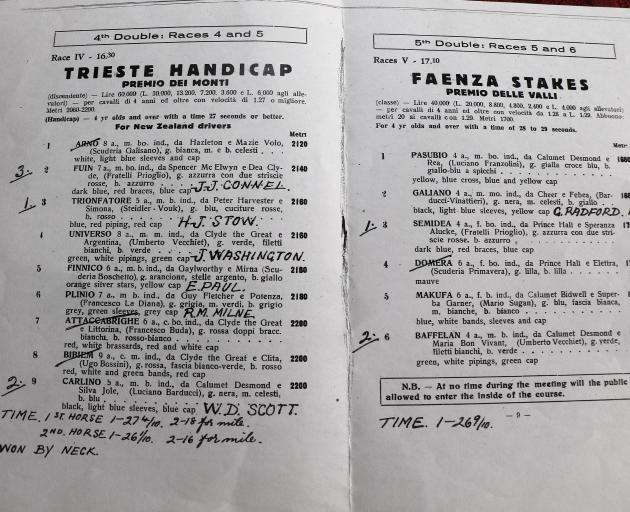 The Trieste Handicap race programme from 1944. Photo: Star Media
Dad went on to tell me more about the big day.

“There were eight races on the programme, two for Kiwi drivers and six for both Kiwi and Italian drivers. There were 20 of us Kiwis, including my mate, Ted Paul, who became New Zealand’s chief handicapper after returning from the war.”

The feature race of the day was the Trieste Handicap.

“I was driving Carlino and thought I may be in for a chance, I just needed to get a good possie on the rails behind the leading bunch. The start of the race, a little different to what we were used to. A rolling start with instructions recorded and relayed through a loudspeaker – ‘pronto’ (ready) with horses walking backwards towards the barrier, ‘una’ (one) they began turning in the right direction, ‘duo’ (two) they gathered speed and ‘tre’ (three) the race is under way.”

“How did you feel, being amongst it?” I asked. 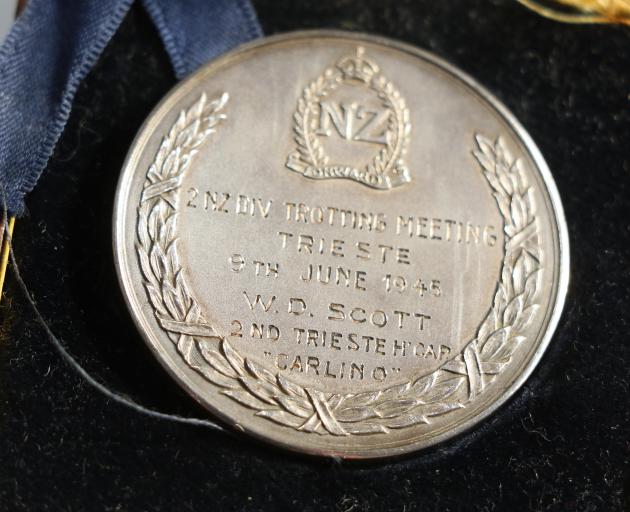 Walter Scott said: "I pretty chuffed and proud in front of my fellow sappers to receive my second-place medal from General McCreery, with General Fryberg looking on". Photo: Star Media
“Pretty good,” he said, “it felt like old times and it took me back to the days when I worked Harold Logan (a famous standard bred pacer who won two NZ trotting cups in 1931 and 1932) for the Shaws at Washdyke.

“As the leading horses reach the bend and into the straight for the final time, I give Carlino his head, I edge out, one horse in front of me, away we fly, I flick my whip, I flick the reins, I yell, come on! You can do it! We cross the finish line behind my mate Jack Stow driving Trionfatore into first place.

“I feel pretty chuffed and proud in front of my fellow sappers to receive my second-place medal from General McCreery, with General Fryberg looking on.”

My dad returned from the war and worked with his brother, Karl Scott, as assistant editor of the New Zealand Trotting Calendar until 1972 when Karl sold the business to a Wellington company.