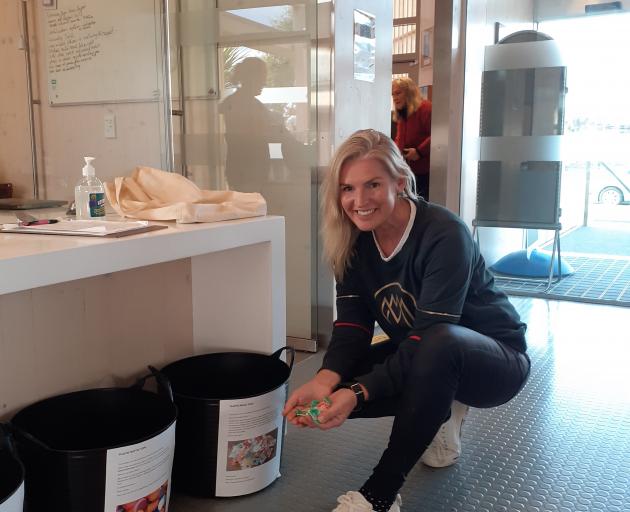 Maria Lamb helps to collect recyclables at the St Albans Community Centre. Photo: Supplied
Christchurch woman Maria Lamb has been gathering rubbish to recycle for 10 years - but now she hopes the rubbish will come to her.

“My really high inspiration is that everyone locally can think: ‘Oh yeah, I know where that goes, I can take it to the community centre.’

“Hopefully, it will divert litter from the landfill.”

Rubbish is a huge issue but this is a way people can make a small difference, she said.

She had been collecting litter while out walking for 10 years.

She also co-ordinated community clean-ups, most recently in St Albans on June 20 in collaboration with the St Albans Residents Association.

However, this was the first community collection point she had established.

“It’s only in the last six months I’ve started to co-ordinate with people.”

Recycling wine caps and can tabs was an idea sparked when her daughter’s school began collecting them to sell as scrap metal, with proceeds donated to charity Kidney Kids NZ.

This year she began collecting them from restaurants and hoped the community would also respond well.

One wine bottle cap buys one second on a dialysis machine, and 3600 buys an hour, she said.

Plastic tags commonly used to tie up bags of bread, crackers or vegetables are also recycled for a cause.

The money would go to the organisation Bread Tags for Wheelchairs, which paid for wheelchairs in South Africa.

Plastic bottle tops would be upcycled into jewellery.

She arranged for them to go to two local businesses, polylabs and remix plastics.

“I reached out to them. They’ll make earrings and necklaces.”

She knew from her walks there was no shortage of material on the ground.

“The most common thing you can find is a plastic bottle.”