Photo: Newsline / CCC
What do you think about a plan to turn a central Christchurch mall into a shared zone?

Christchurch City Council wants public feedback on its plan to allow goods vehicles into City Mall during mornings only, making it safer for people walking and gathering.

Under the proposed changes, a 10km/h speed limit would be introduced on City Mall and cycling would also be permitted.

"Currently, goods vehicles are allowed to access City Mall and Oxford Terrace between 5am and 10am and between 4pm and 11pm, but we are proposing to restrict their access to mornings only when there are fewer people around and less potential for conflict. 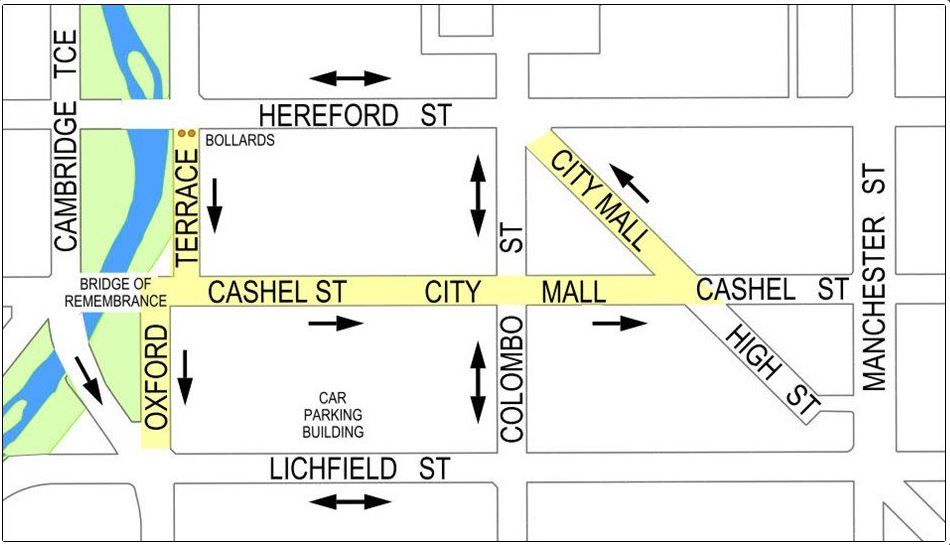 The proposed extension of the shared zone on Oxford Tce to City Mall. Image: Newsline / CCC
"In the evenings, there are often large crowds gathered around the bars and restaurants so there are potential safety risks if goods vehicles are driving through the area.

"For safety reasons, we are also going to be installing retractable bollards at the intersection of Oxford Terrace and Hereford Street. Emergency vehicles and the tram will still be able to access the area at all times.

"Oxford Terrace links directly to the City Mall so it makes sense for there to be a consistent environment. We think that will make it safer for all road users," Thomas said.

The public have until Thursday, February 18, to give feedback on the proposed changes to City Mall here.