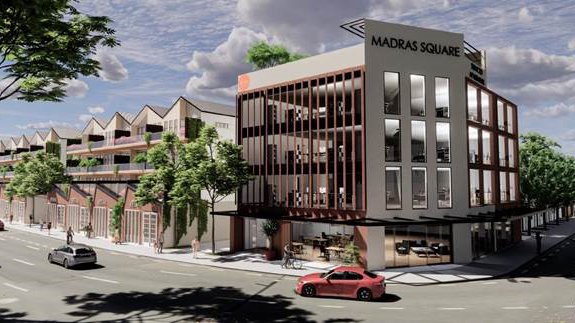 The planned development for the 8145 square metre Crown-owned site. Image: Newsline
More than 100 new homes and commercial spaces are set to be built on a section in central Christchurch bordered by Gloucester, Madras and Armagh Sts.

The 8145 sq m Crown-owned site has been sold to a Mike Greer Group and Pebbles Group joint venture, which plans to develop it for housing and retail, Ōtākaro chief executive John Bridgman said.

“Having New Zealand’s largest independently-owned home builder partnering with the group behind the Riverside Market, McKenzie and Willis, and Little High Eatery developments means the site will be in the hands of proven performers.”

The purchase price is commercially confidential at this time, he said.

The plan is to build about 111 homes, ranging from two-bedroom apartments over retail spaces, through to three-bedroom townhouses around a communal garden.

Mike Greer said they will now begin more detailed planning for the development, before starting work on site later this year.

“We’re eager to get going as quickly as possible," Greer said.

"It’s such a great location that we’ve had our eye on for a long time. We’re pleased that Ōtākaro recognises the value of the private sector to deliver much-needed housing to the central city.”

Listing agent Courtney Doig, of Colliers, said interest in the site was strong.

“We received nine highly competitive bids - three of those from Auckland parties - and we estimate that there’s still $90 million of unsatisfied demand looking for suitable land in the inner city."