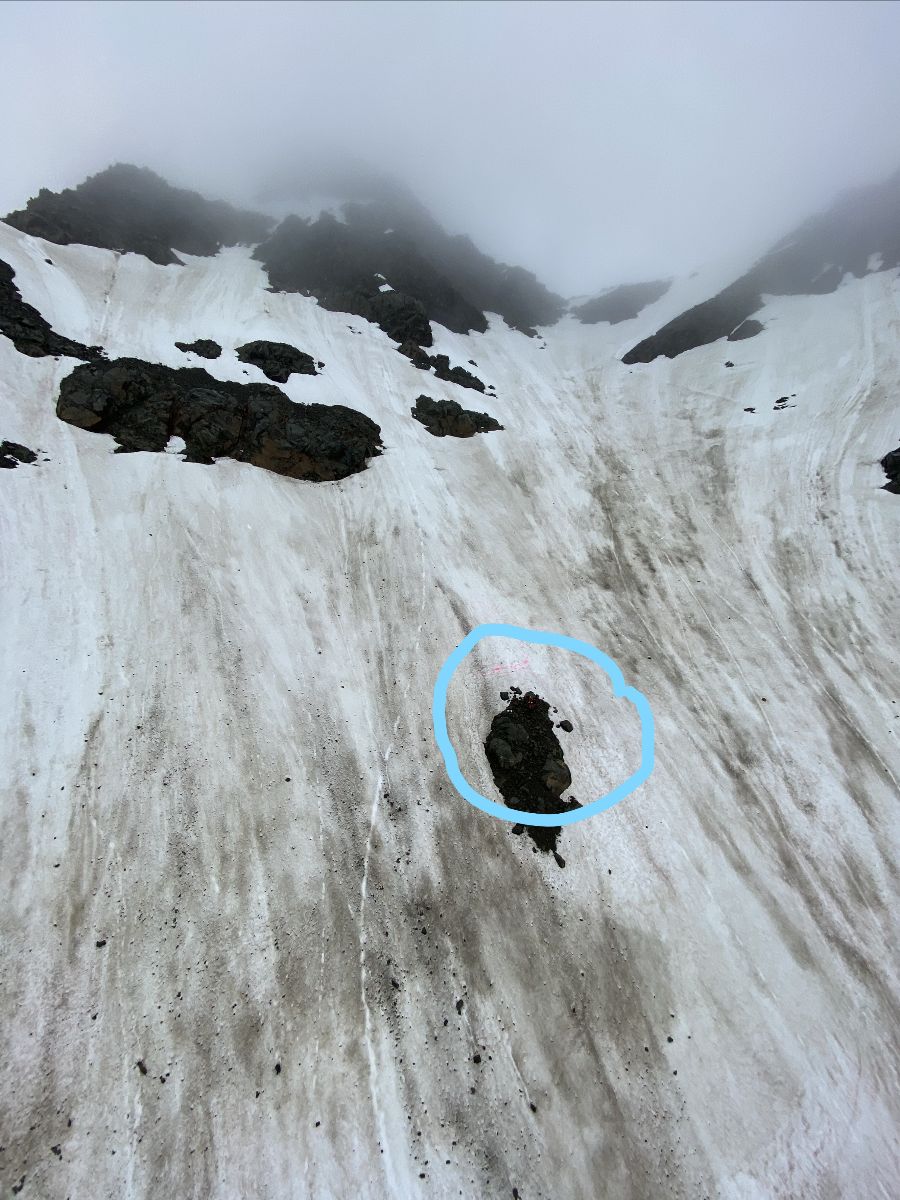 The climbers were located near Stewart's Glacier in the Fitzgerald Pass in the Aroarokaehe range. Photo: Maritime NZ
Three injured climbers have had a lucky escape after a fall on rocks in Aoraki/Mt Cook National Park, Maritime NZ says, the second rescue in a a week.

Its Rescue Coordination Centre New Zealand (RCCNZ) carried out the mission to retrieve the climbers near Stewart's Glacier in Canterbury in spite of challenging weather conditions.

It is understood the group were three men in their 50s, who were undertaking a multi-day trip. They were experienced climbers and well-equipped for the terrain. Two suffered minor injuries.

Search and Rescue officer Samantha Mildon said the group activated their personal locator beacon about 9.15am yesterday, after they fell 10 to 15 metres on to rocks on Tuesday afternoon. 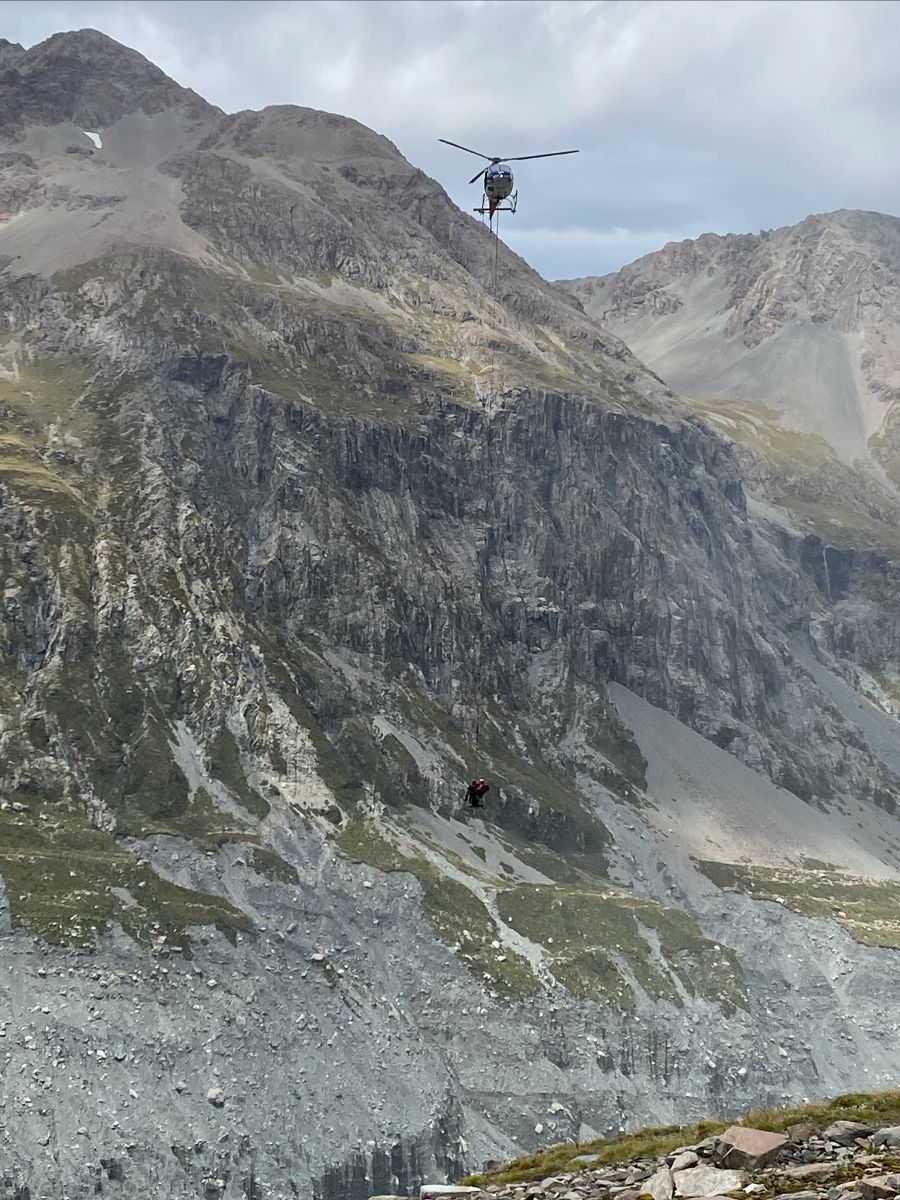 The climbers were experienced and well-equipped for the terrain. Photo: Martime NZ

The "tricky rescue" was completed about 3pm yesterday when the climbers were flown by helicopter to Mount Cook village for treatment which included minor hypothermia, she said.

"After receiving the beacon alert on Wednesday morning, RCCNZ tasked a Helicopter Line helicopter to fly from Mount Cook with a Department of Conservation Aoraki/Mt Cook alpine cliff rescue team on board.

"After some initial difficulty pinpointing the exact location of the group due to the heavy cloud cover, they were eventually located near Stewart's Glacier in the Fitzgerald Pass in the Aroarokaehe range.

Ms Mildon said due to the nature of the terrain, the helicopter could not use its long line to pull the group to safety, so the alpine cliff rescue team were dropped off at Copland's shelter, and walked in to retrieve the group on foot.

"After the group were lowered to a safer position, the helicopter was then able to pull the group to safety and they were taken to Mt Cook village.

"One of the party, who had a laceration to the leg, was taken by ambulance to Twizel for medical assistance. Another member of the group had mild hypothermia but did not require further medical attention." 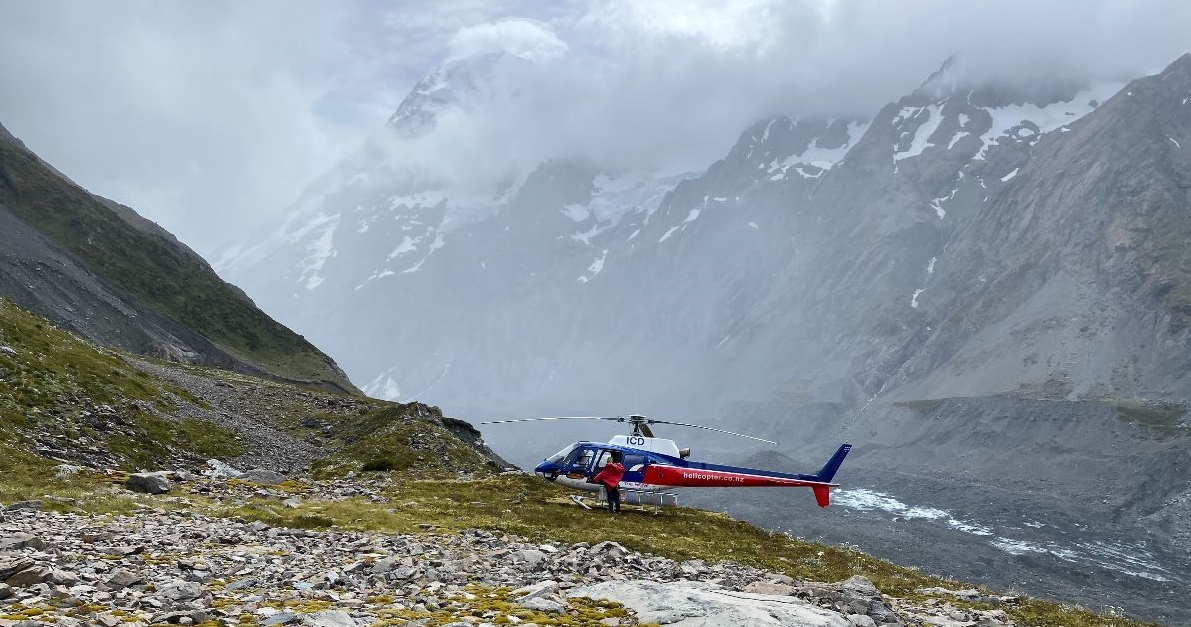 The Helicopter Line flew the climbers and rescue team back to safety. Photo: Maritime NZ
Ms Mildon says the climbers made the right call to activate their beacon when they did.

"The weather was marginal and seemed to be deteriorating. If they had waited much longer, the weather would have closed in on them and it could have been a very different story."

"RCCNZ would like to thank the all those involved in the rescue, they carried out an incredible job in some particularly challenging weather and conditions."

Last week, two climbers had to be rescued by helicopter after getting caught in a rockslide in steep terrain on Mt D’Archiac in  Aoraki/Mt Cook National Park.

The man had an arm badly broken in two places, concussion and a badly gashed leg. The woman was relatively unharmed. She had roped the injured climber on to the steep slope to prevent him from falling and suffering further injuries.

The pair activated a distress alerting function of their InReach device at 5.30pm on Wednesday after the rockslide. The rescue was completed at 8.50am on Thursday.