Protesters take cover with makeshift shields during an anti-coup protest in Yangon on Wednesday. Photo: Reuters
Thirty-eight people were killed in Myanmar on Wednesday as the military quelled protests in several towns and cities, the United Nations said, the most violent day since demonstrations against last month's military coup first broke out.

The bloodshed occurred one day after neighbouring countries had called for restraint in the aftermath of the military's overthrow of the elected government of Aung San Suu Kyi.

"It's horrific, it's a massacre. No words can describe the situation and our feelings," youth activist Thinzar Shunlei Yi told Reuters via a messaging app.

At least 38 people were killed in Myanmar on Wednesday, the UN confirmed, marking the worst day of violence since protests against military rule began

"Today it was the bloodiest day since the coup happened on the 1st of February. We had today - only today - 38 people died. We have now more than over 50 people died since the coup started, and many are wounded," United Nations special envoy on Myanmar, Christine Schraner Burgener, said in New York.

She said Myanmar military was ready to withstand sanctions and isolation and she urged countries to "take very strong measures" to restore democracy in the Southeast Asian nation.

A spokesman for the ruling military council did not answer telephone calls seeking comment.

Ko Bo Kyi, joint secretary of the Assistance Association for Political Prisoners rights group, had said earlier the military killed at least 18. But the toll rose by the end of the day.

In the main city Yangon, witnesses said at least eight people were killed, one early in the day and seven others when security forces opened sustained fire in a neighbourhood in the north of the city in the early evening.

"I heard so much continuous firing. I lay down on the ground, they shot a lot," protester Kaung Pyae Sone Tun (23) told Reuters. 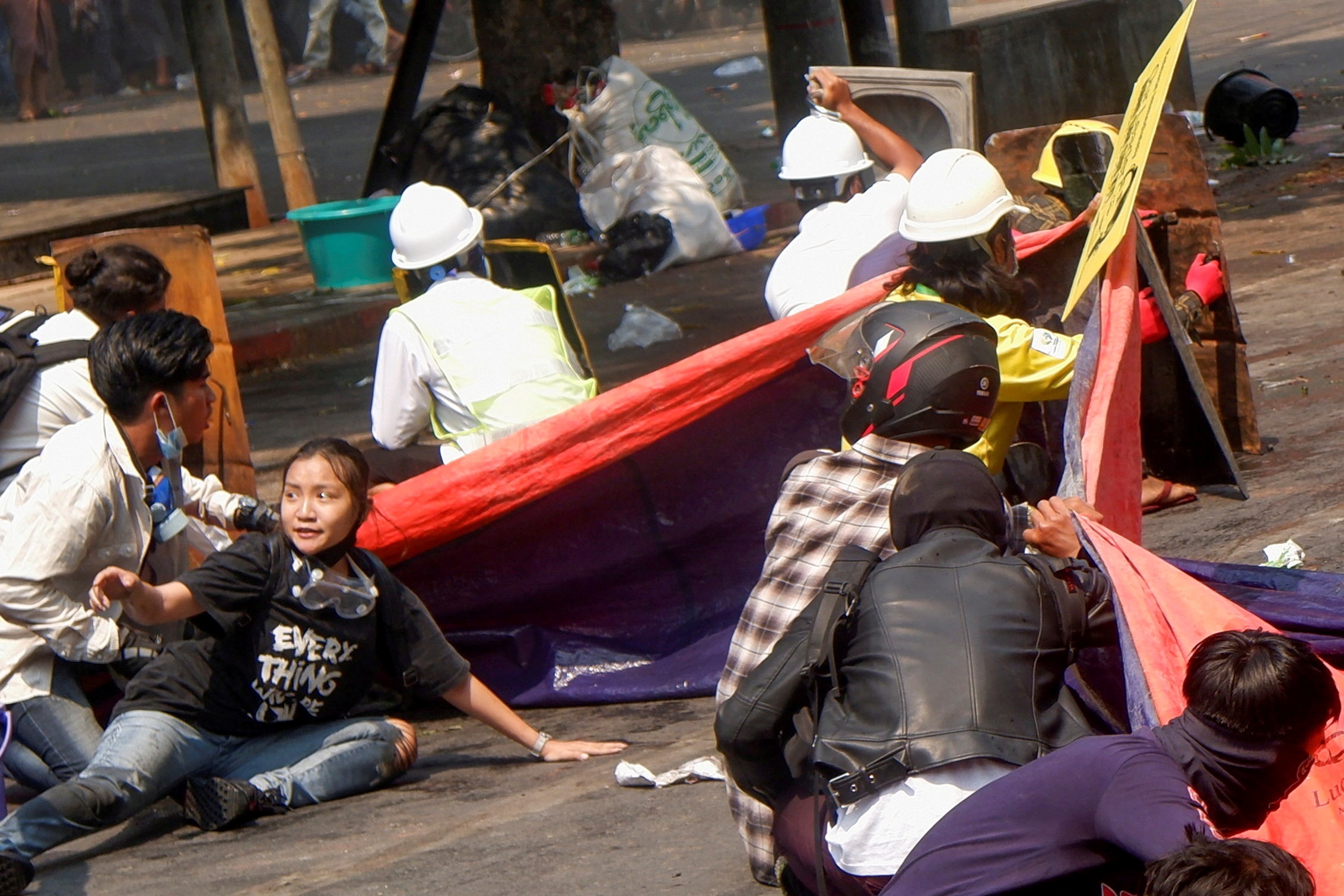 Everything will be OK,' read 19-year-old Angel’s T-shirt as the dancer and taekwondo champion joined anti-coup protesters.. She left details of her blood group, a contact number and a request to donate her body in the event of her death. Photo: Reuters
A protest leader in the community, Htut Paing, said the hospital there had told him seven people had been killed. Hospital administrators were not available for comment.

After nightfall, Yangon residents lit candles and held prayers for the dead.

Save the Children said in a statement four children were among the dead, including a 14-year-old boy who Radio Free Asia reported was shot dead by a soldier on a passing convoy of military trucks. The soldiers loaded his body onto a truck and left the scene, according to the report.

The violence took place a day after foreign ministers from Southeast Asian neighbours urged restraint but failed to unite behind a call for the release of Suu Kyi and the restoration of democracy.

Pope Francis said on Twitter: "Sad news of bloody clashes and loss of life...I appeal to the authorities involved that dialogue may prevail over repression."

The European Union said the shootings of unarmed civilians and medical workers were clear breaches of international law. It also said the military was stepping up repression of the media, with a growing number of journalists arrested and charged.

"There must be accountability and a return to democracy in Myanmar," the EU said. 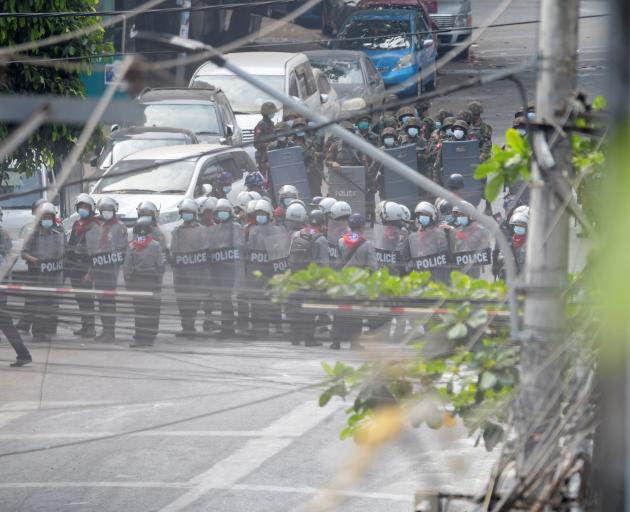 There was a heavy police and army presence in Yangon. Photo: Reuters

Video posted on social media showed lines of young men, hands on heads, filing into army trucks as police and soldiers stood guard. Reuters was unable to verify the footage.

Images of a 19-year-old woman, one of the two shot dead in Mandalay, showed her wearing a T-shirt that read "Everything will be OK".

Police in Yangon ordered three medics out of an ambulance, shot up the windscreen and then kicked and beat the workers with gun butts and batons, video broadcast by US-funded Radio Free Asia showed. Reuters was unable to verify the video independently.

Democracy activist Esther Ze Naw told Reuters that the sacrifices of those who died would not be in vain.

"We shall overcome this and win," she said.

On Tuesday, the Association of Southeast Asian Nations (ASEAN) failed to make a breakthrough in a virtual foreign ministers' meeting on Myanmar.

While united in a call for restraint, only four members - Indonesia, Malaysia, the Philippines and Singapore - called for the release of Suu Kyi and other detainees.

"We expressed ASEAN's readiness to assist Myanmar in a positive, peaceful and constructive manner," the ASEAN chair, Brunei, said in a statement.

The military justified the coup by saying its complaints of voter fraud in the November 8 vote were ignored. Suu Kyi's party won by a landslide, earning a second term.

The election commission said the vote was fair.

Suu Kyi (75) has been held incommunicado since the coup but appeared at a court hearing via video conferencing this week and looked in good health, a lawyer said.

The UN Security Council is due to discuss the situation on Friday in a closed meeting, diplomats said.

The 15-member council has voiced concern over the state of emergency, but stopped short of condemning the coup last month due to opposition by Russia and China.