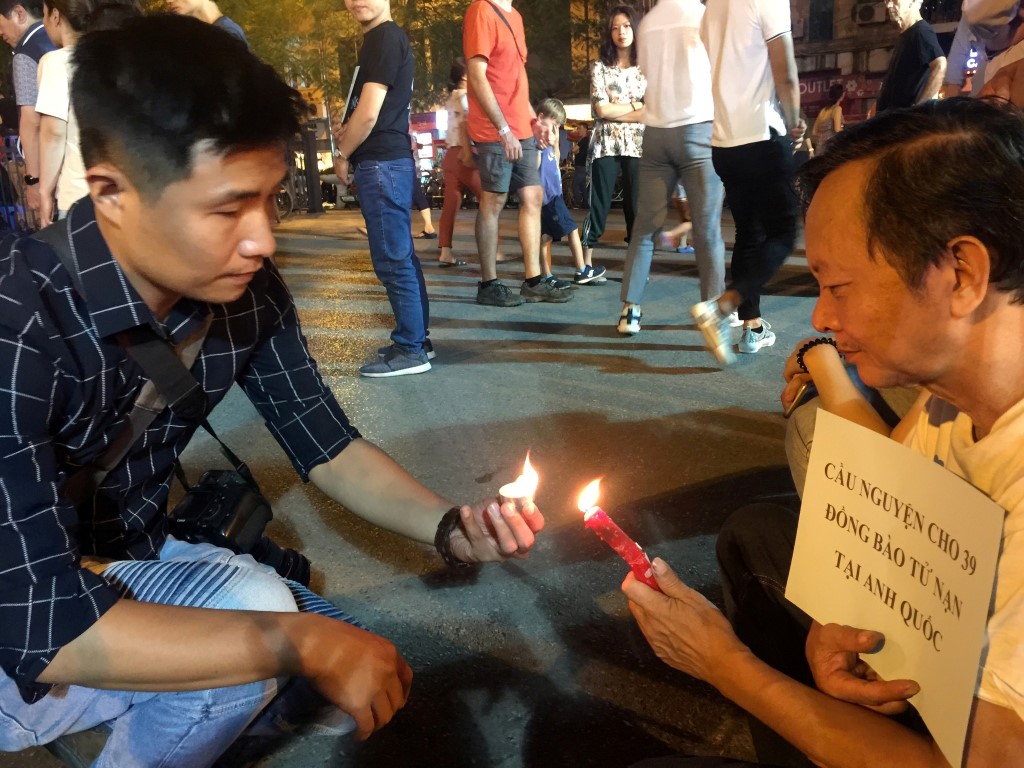 People light candles during a prayer for the 39 victims at Hanoi Cathedral in Vietnam. Photo: Reuters
A second man has been charged with manslaughter over the deaths of 39 people found in the back of a truck near London, police said, as they confirmed they now believe all the victims were Vietnamese.

In Vietnam, police said they had detained two people.

The discovery of the bodies in a container on an industrial estate has shone a spotlight on the illicit trade that sends the poor of Asia, Africa and the Middle East on perilous journeys to the West.

The alleged truck driver has already been charged over the deaths, and on Friday detectives said Eamon Harrison, 23, from Northern Ireland, was also accused of 39 counts of manslaughter as well as human trafficking and immigration offences.

Harrison appeared at Dublin's High Court at the start of proceedings to extradite him from Ireland to Britain. He was remanded in custody until Nov. 11, a court spokesman said.

The bodies were found early on October 23 after the container arrived in Britain from Zeebrugge in Belgium. The container was picked up at Purfleet dock in Essex, east of London, by a truck allegedly driven by Maurice Robinson, 25, from Northern Ireland.

The victims were found not long afterwards. Police have not confirmed the exact cause of their deaths.

They initially said the victims were thought to be Chinese, but on Friday evening they said they were now all believed to Vietnamese.

"We are in direct contact with a number of families in Vietnam and the UK, and we believe we have identified families for some of the victims," Essex police Assistant Chief Constable Tim Smith said on Twitter.

Vietnamese police said they had arrested two people and summoned others for questioning on Friday after opening a criminal investigation into suspected human trafficking.

British police also appealed on Friday to Ronan Hughes, 40, and his brother Christopher, 34, from Armagh in Northern Ireland, who they said were crucial to their inquiries. They are wanted on suspicion of manslaughter and human trafficking.

Daniel Stoten, the officer leading the investigation, said police had spoken by telephone to Ronan Hughes recently but needed to question the brothers in person.

"Today I want to make a direct appeal. Ronan and Christopher, hand yourselves in," Detective Chief Inspector Stoten said.

Lawyers for Global Trailer Rentals, the owner of the trailer, have said Ronan Hughes signed the papers to rent the container, giving an address matching the haulier, C Hughes Transport. Christopher Hughes is listed as a director of C Hughes Logistics Ltd, based in Armagh.