Democrat Joe Biden renewed his attacks on US President Donald Trump's handling of the coronavirus pandemic the final debate before the November 3 election, while Trump levelled unfounded corruption accusations at Biden and his family.

Trump, a Republican, initially adopted a more restrained tone than he did during their first presidential debate in September, which was quickly derailed by his constant interruptions.

But Thursday's clash still featured plenty of personal attacks between two men who evince little respect for each other.

The televised encounter in Nashville, Tennessee, on Thursday night (Friday afternoon NZ time) represented one of Trump's last remaining opportunities to reshape a campaign dominated by a pandemic that has killed more than 221,000 people in the United States.

Opinion polls show Trump is trailing Biden, though the contest is tighter in some battleground states likely to decide the election.

"Anyone who's responsible for that many deaths should not remain president of the United States of America," Biden said.

Trump (74) defended his approach to the outbreak and claimed the worst of the pandemic was in the past.

"We're rounding the corner," said Trump, who has played down the virus for months. "It's going away."

Trump also claimed that a vaccine was potentially "weeks" away. Most experts, including administration officials, have said a vaccine is unlikely to be widely available until mid-2021.

Several US states, including the election swing state of Ohio, reported record single-day increases in Covid-19 infections on Thursday, evidence the pandemic is accelerating anew.

After an opening segment on the pandemic, the clash pivoted to rapid-fire exchanges over whether either candidate had improper foreign entanglements.

Trump repeated his accusations that Biden (77) and his son Hunter engaged in unethical practices in China and Ukraine. No evidence has been verified to support the allegations, and Biden called them false and discredited.

Trump's effort to uncover dirt on Hunter Biden's Ukraine business ties led to the president's impeachment. The president and his children have been accused of conflicts of interest of their own since he entered the White House in 2017, most involving the family's international real estate and hotel businesses. 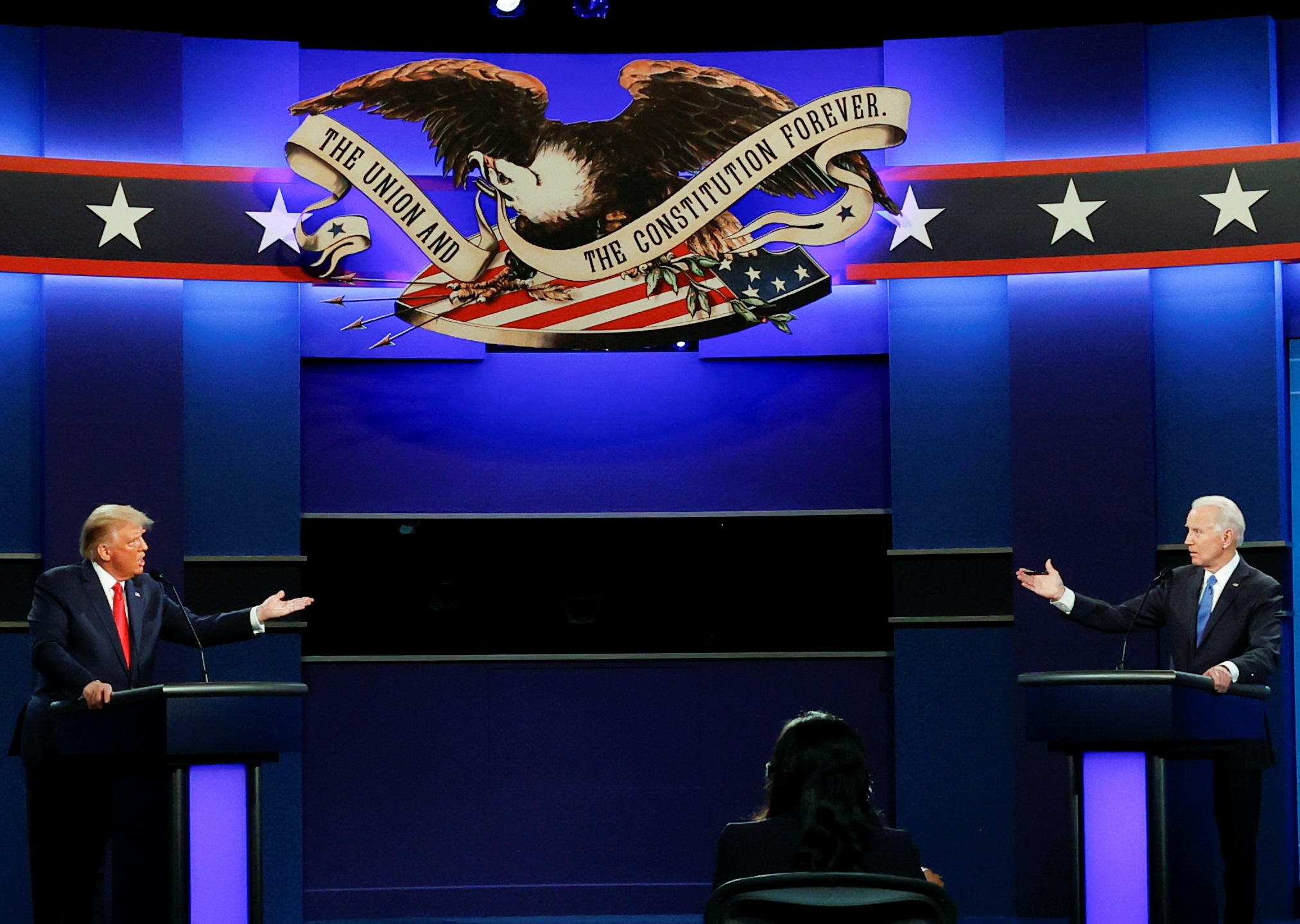 Biden defended his family and said unequivocally that he had never made "a single penny" from a foreign country, before pivoting to accuse Trump of trying to distract Americans.

"There's a reason why he's bringing up all this malarkey," Biden said, looking directly into the camera. "It's not about his family and my family. It's about your family, and your family's hurting badly."

Trump, who has broken with decades of precedent in refusing to release his tax returns, said he had paid "millions." He again said he would release his returns only once a longstanding audit was completed.

The candidates clashed over healthcare, China policy and - after months of anti-racism protests - race relations with Biden saying Trump was "one of the most racist presidents" in history.

"He pours fuel on every single racist fire," Biden said. "This guy has a dog whistle as big as a foghorn."

Trump responded by criticizing Biden's authorship of a 1994 crime bill that increased incarceration of minority defendants while asserting that he had done more for Black Americans than any president with the "possible" exception of Abraham Lincoln in the 1860s.

AT ODDS OVER HEALTHCARE

Trump said he wanted to replace the ACA with something "much better" that would offer the same protections, even though the administration has yet to propose a comprehensive healthcare plan despite a promise to do so for years.

Relatively few voters have yet to make up their minds, and Trump's window to influence the outcome may be closing. A record 47 million Americans already have cast ballots, eclipsing total early voting from the 2016 election.

The contentious first debate, when the two men traded insults, was watched by at least 73 million viewers. Trump passed up another planned debate last week after it was switched to a virtual format following his Covid-19 diagnosis.

On Thursday, the commission that oversees the debate removed plexiglass barriers separating the candidates after Trump provided proof he had tested negative for Covid-19, a source familiar with the matter said.

The commission also muted the candidates' microphones to allow each to deliver two-minute statements on each new topic before turning them back on, in an effort to avoid the chaos of the first debate.

The approximately 200 attendees had their temperatures checked before entering the venue, and everyone was required to wear a medical mask at all times.

September's contentious first debate between the pair was watched by at least 73 million viewers. Trump passed up another planned debate last week after it was switched to a virtual format following his Covid-19 diagnosis.