Christine Blance, Nick Te Paa and Bronwyn Saunders. Photo: Geoff Sloan
A garden that has been an integral part of Riccarton for more than seven years is set to remain in the community for now.

The future of the Riccarton West Community Garden was stuck in limbo after its closure in September when the lease for the land came to an end.

But it has since re-opened on Peverel St after a compromise was struck with landowner, Kāinga Ora, which will allow the garden to continue flourishing for the next two years.

The Christchurch South Community Gardens Trust now manages the space, which has been downsized to make way for new public housing due to be built soon.

Said trust manager Christine Blance: “It is very good news for local Riccarton residents as the community gardens and pantry contribute significantly to their well-being, and to neighbourhood sustainability.”

Kāinga Ora will soon start building 12 of the 13 homes planned for the Peverel St site where the garden is located, and adjoining sites at Kea St. 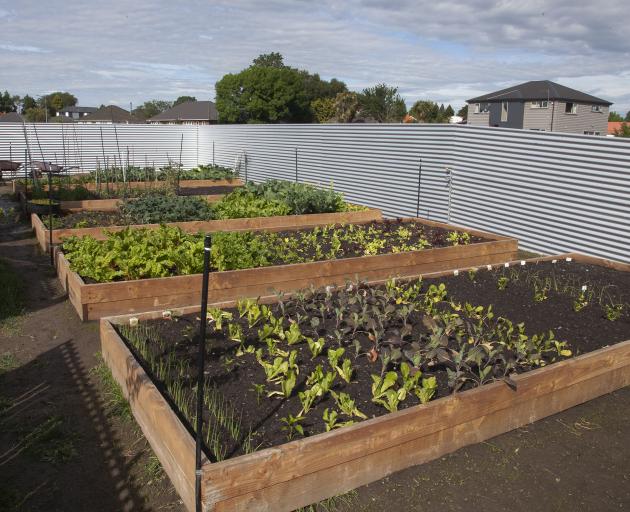 The Riccarton West Community Garden. Photo: Geoff Sloan
This gives the trust two years to find a permanent location for the garden while the construction progresses. Once the garden is relocated and the land is returned to Kāinga Ora, it will complete construction on the 13th and final home.

In July next year, the Riccarton West Community Garden Trust will take over the lease once it has been established.

Said Blance: “Complete demolition was the only other alternative. The current site allows for the Riccarton Community Gardens Development Group to have some breathing space while they form a charitable trust and identify another suitable, permanent site.”

The garden was established in 2013 when members of the Student Volunteer Army, the Riccarton West Neighbourhood Policing Team, and residents came together to dig and prepare the land for planting.

Blance said there is no confirmation on a new location, which will required access to utilities, such as power and water, and good street access.

But she invited anyone with land to offer for a long-term lease to email her at info@cscommunitygardens.net.nz