Police and security staff get details from protesters who glued themselves to Parliament steps. Photo: Mark Mitchell
Three people have been arrested after allegedly refusing to leave Parliament today following demonstrations for Extinction Rebellion.

Earlier on Wednesday around half a dozen activists were seen sitting on Parliament's steps, where they had reportedly glued themselves.

A police spokesperson said the three arrested after being trespassed would be referred to Te Pae Oranga to take part in restorative justice.

The Spring Rebellion is four days of action, which began on Monday and ends tomorrow, to shine a light on climate change.

One of the protesters said they had been at the steps since 5pm yesterday, and had also demonstrated at other parts of the capital. 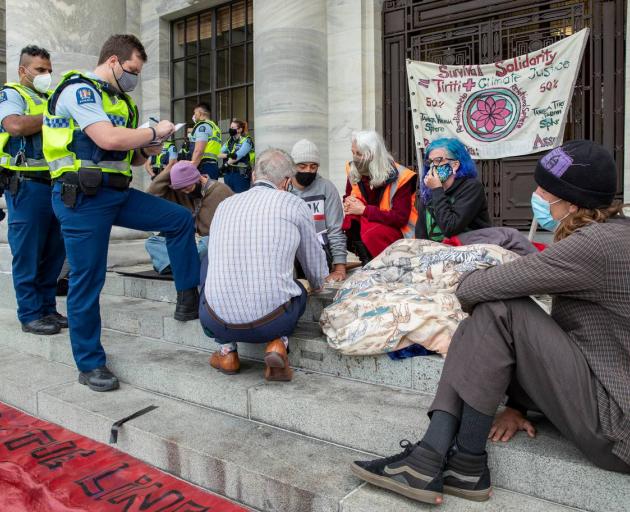 Protesters had glued themselves to Parliament steps. Photo: Mark Mitchell
"We had an action around Te Papa, surrounding the mistranslation of the Treaty and the continuing presence of colonisation through that," she said.

"Our aim was to draw attention to Te Tiriti-based climate assemblies, which we believe is one of the only ways to genuinely address the climate crisis without further ignoring colonisation, capitalism, imperialism."

She said their assemblies were a form of "participatory democracy" centering on Te Tiriti, in solidarity with land back movements such as Mau Whenua.

Police said a 41-year-old-man was also arrested after an incident involving protest action at a building on Bowen Street this morning.

He is due to appear in the Wellington District Court on November 1 charged with wilful damage.

Rebels dressed as cows moving to disco music at Wellington Station. Photo: Patrick Flanagan via NZH
Earlier today herds of dancing cows also made their way around the capital in protest at industrial agriculture.

The "herd" moved around some of Wellington's key locations, including the Beehive.

The group's event page said the action was in protest at industrial agriculture for its effects on the environment and human health.

Extinction Rebellion Aotearoa is part of an international mass movement towards more sustainable and humane forms of agriculture.

The group said their event was inclusive, family-friendly and "non-violent".

View from inside Parliament this morning. pic.twitter.com/AWgNUR1RHz