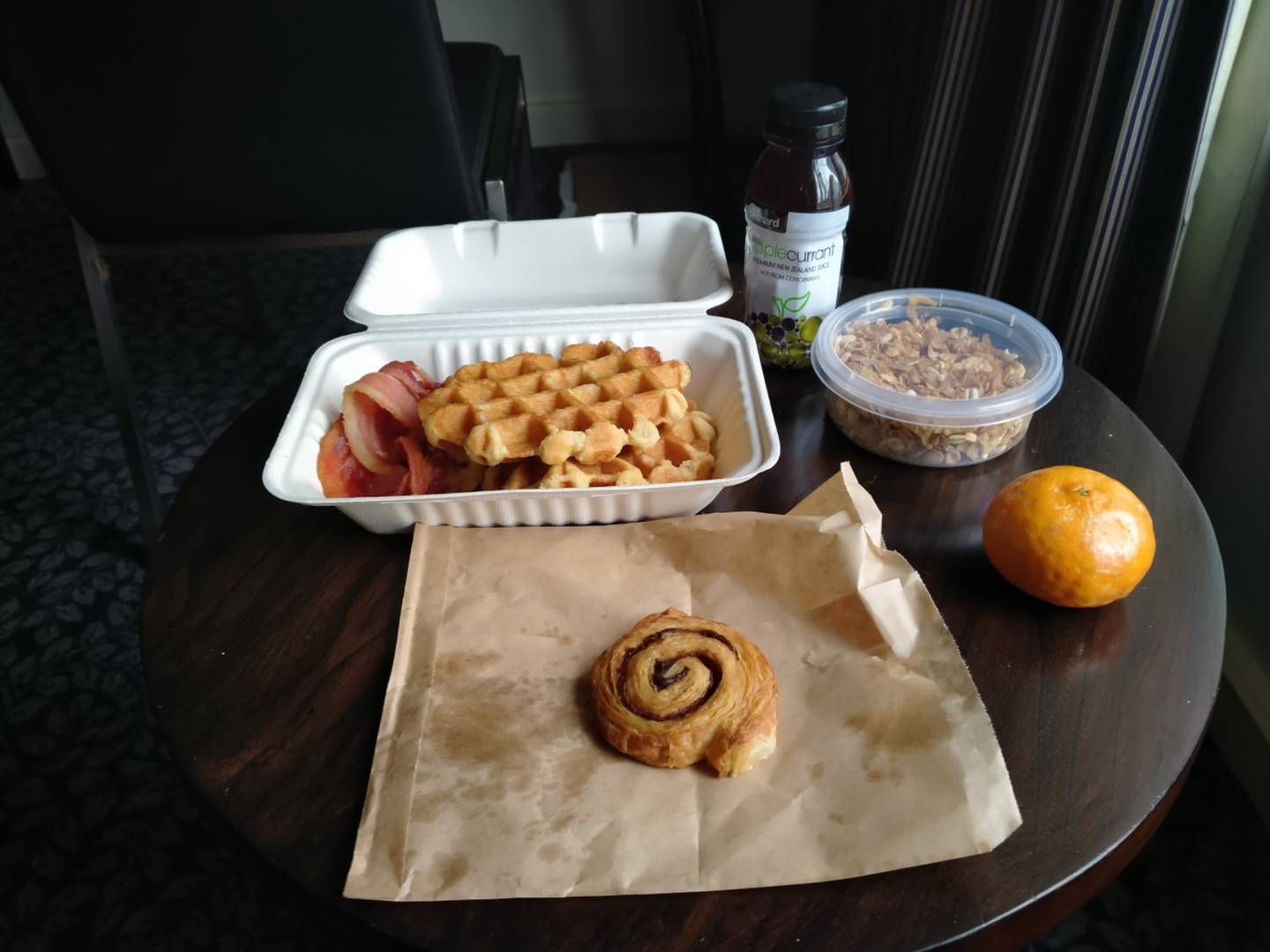 The man is upset at not being given any maple syrup with his waffles [pictured] and bacon for two breakfasts in a row this week. Photo: Supplied
A man in managed isolation says he is shocked at the quality of the meals he has been receiving and says there's massive amounts of waste from other travellers.

The man, who did not want to be named for fear of retaliation from the Auckland hotel's chefs, is also a 20-year working chef and day after day has been disappointed at the quality of his food which on Tuesday included "stale croutons".

The keen meat eater is also now sick of chicken and upset that it's the only protein that he's been given.

"I've been here from Saturday and so far every single lunch and dinner was with chicken except for last night, which was pork nachos.

"This means that since Saturday I have had chicken satay, chicken bread roll, chicken salad, chicken in cream sauce and today I have received chicken Caesar salad." 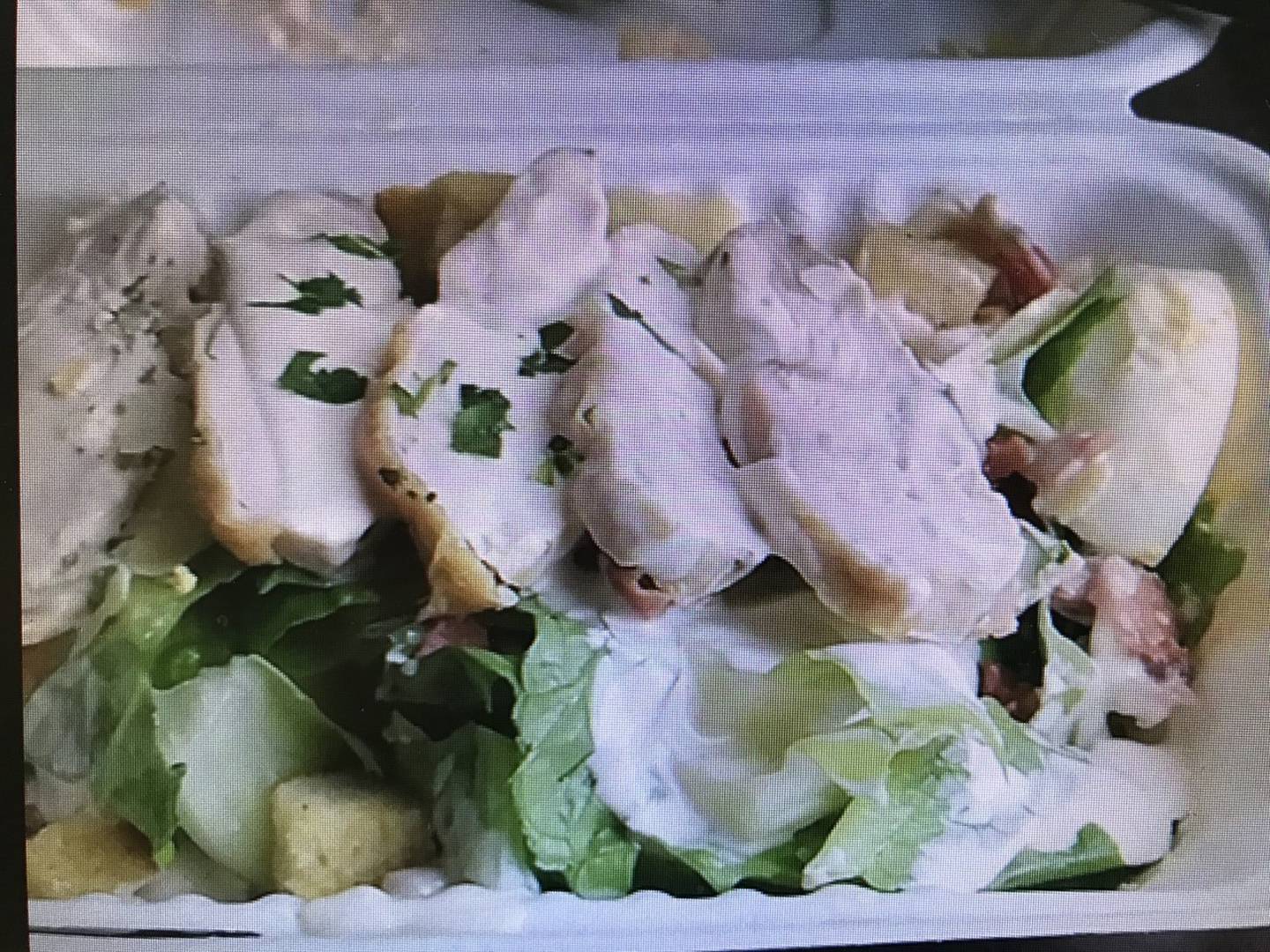 The man's lunch in MIQ at the Crowne Plaza Hotel was a ceaser salad and croutons which the man claimed were "rock hard" and "stale". Photo: Supplied
Adding to his complaints was the lack of maple syrup - he was horrified not to be given any to accompany his three pancakes and three rashers of bacon and quarter of a banana.

"Two days ago I have received three dry pancakes with three wedges of tinned peaches with no maple syrup at all.

"I ate it just because I was really hungry and chased it with a glass of milk to make it easy to swallow.

"[Tuesday] morning I have received two waffles with two rashers of bacon and a piece of banana and surprisingly no maple syrup again."

As for breakfast there was couple of waffles, three rashers of bacon and a quarter of banana together with cereal and Marmite and cheese scroll with no cheese on it.

He rang and complained and was sent some maple syrup about 15 minutes later but by that stage, his food had gone cold, disappointing him even more.

Then for his lunch, he got a chaser salad with "stale croutons". He was also meant to get a bread roll but it had been forgotten.

When he's ventured out for exercise he's also noticed the massive amounts of meals either not being touched or being only partially eaten by fellow returnees.

He's concerned at the amount of money and food being wasted when the hotel had the facilities to cook better food.

He had ordered Uber Eats once and it arrived within 15 minutes with the food still warm.

He had since googled the hotel and discovered the Herald's story from October in which a woman, Heather, returning from Australia, claimed the food was "inedible".

She was so desperate she had tried to get a friend to deliver a microwave to her hotel room.

When asked what he would tell people who would say he's simply whinging, the man said he didn't want to be a "complainer" but he was also complaining about the wastage.

"What hurts me is the waste ... when I go for walk to exercise I can see loads of bags of food pretty much untouched as people don't want to eat it.

"Seeing and experiencing this, my soul is crying because of the food waste which is happening here.

"Something is definitely not right."

The Crowne Plaza did not respond to requests for comment.

A spokesperson for MBIE, the Government department in charge of managed isolation, said in a statement that their 32 facilities provided about 13,000 meals a day to guests every day.

"Our facilities receive an overwhelming amount of positive feedback from returnees on the quality of food provided and we thank facility staff for their work during this global pandemic.

"Management of our facilities do all they can to make sure each and every guest enjoys their stay with them."

However, the spokesperson added that anyone in an MIQ who had concerns should contact hotel staff so they could address any issues and ensure they're happy with future meals.

"Guests are provided three meals a day and snacks to their room. For any additional meals, guests can order room service or deliveries from local shops or supermarkets at their own expense."

Part of the site assessment for managed isolation facilities includes confirmation that the facility is able to provide returnees with three meals a day that meet returnees' dietary requirements, medical needs and cultural tastes.

Dietary requirements, including allergies, intolerances, preferences, and/or cultural/religious considerations, are identified through a questionnaire returnees answer as they enter the facility.

Meals can be prepared onsite or catered and delivered. All food procurement, preparation, and storage must comply with current New Zealand food safety standards, the spokesperson said.