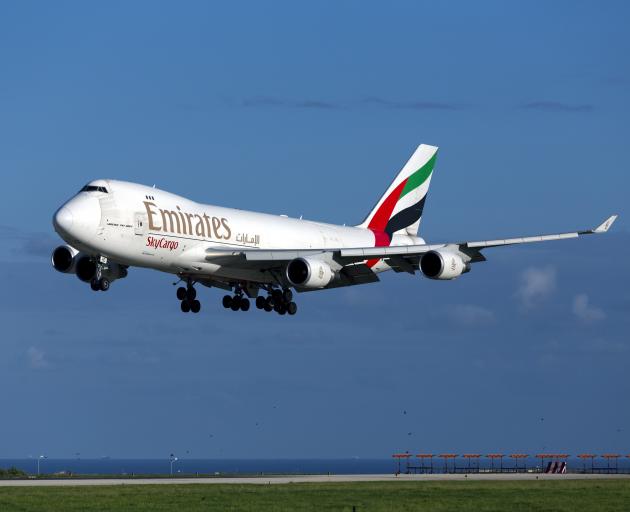 While down on its previous frequencies, the flights will provide more options for Kiwis wanting to return home and for foreign nationals here to get back to their countries. Photo: Getty Images
Emirates says it will return to Auckland with scheduled passenger services from July 1.

The airline stopped all scheduled flights in March but is gradually restoring some of its international network, including New Zealand.

All passengers will be issued with masks and gloves.

The airline will operate three return services a week and is still confirming which aircraft type it will use.

While down on its previous frequencies, the flights will provide more options for Kiwis wanting to return home and for foreign nationals here to get back to their countries.

Overnight the airline announced it will over the next three weeks offer scheduled flights for travellers in 9 more cities besides Auckland: Colombo, Sialkot, Istanbul, Beirut, Brussels, Hanoi and Ho Chi Minh City, Barcelona and Washington DC.

This will take the total number of Emirates destinations on offer for travellers to 40.

Customers can book to fly between destinations in the Middle East, Asia Pacific and Europe or the Americas through Dubai, as long as they meet travel and immigration entry requirements of their destination country.

While Air New Zealand's transtasman flights have been criticised for a lax approach to health, other airlines are more strict.

Emirates says it has implemented a comprehensive set of measures at "every step of the customer journey" to ensure the safety of its customers and staff on the ground and in the air, including the distribution of complimentary hygiene kits containing masks, gloves, hand sanitiser and antibacterial wipes to all customers.

The airline used to fly daily from Auckland to Dubai and from Christchurch to Dubai via Australia using Airbus A380 superjumbos. It also had Auckland-Bali services.

During the past two months it has been running some freight flights out of New Zealand.

The airline sponsors Emirates Team New Zealand and has been eager to re-establish a presence in this country.

It is warning passengers that with travel restrictions in place, they will only be accepted on flights if they comply with the eligibility and entry criteria requirements of their destination countries.

Meanwhile Qantas has cancelled all international flights until late October, with the exception of routes to and from New Zealand which could be expanded if the transtasman bubble comes into effect.

The airline expects the impact of the coronavirus pandemic will last through most of the year.

"With Australia's borders set to remain closed for some time, we have cancelled most international flights until late October," the airline said.

Earlier this week, Australia's tourism minister Simon Birmingham said that international borders with most countries were unlikely to reopen until 2021.

"I do sadly think that in terms of open tourist-related travel in or out of Australia, that remains quite some distance off," he said. "Just because of the practicalities of the volumes that are involved and the need for us to first and foremost keep putting health first."

Like Air New Zealand, Qantas is expanding its domestic network as internal travel restrictions are eased.