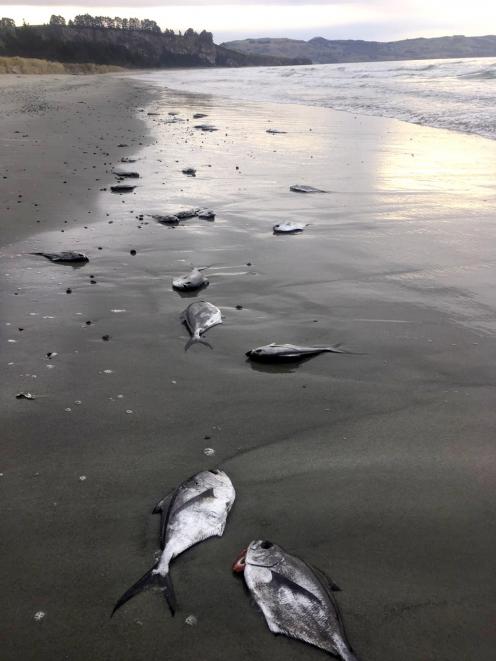 Dead juvenile Ray’s bream lie on Long Beach on Sunday. PHOTO: GARY ALLPRESS
First there were paua; now it is fish, as hundreds of dead bream have washed up on shores around Otago recently.

Last week the beach at Kaka Point, on the northern edge of The Catlins, was littered with dead and dying paua after the heavy tide fell.

Residents in the area told the Otago Daily Times the "natural phenomenon" had occurred previously, but never as bad.

On Sunday, Gary Allpress was walking his dog on Long Beach, north of Dunedin, and came across "hundreds of those little bream-like fish".

Mr Allpress said he recognised the fish as he had seen similar phenomena further north in the past.

Ministry for Primary Industries regional manager fisheries compliance, Garreth Jay, said juvenile ray’s bream fish were confirmed to have washed up along some beaches in the Dunedin area, including Whareakeake, Long Beach and Aramoana.

MPI officers had been on site at some of the beaches, and there was no evidence the dead bream were a result of fishing activity.

He believed recent weather and sea conditions had caused the fish to be pushed inshore and on to the beaches. They then became stranded when the tide went out.

MPI has urged beachgoers not to gather or eat the dead fish or shellfish.